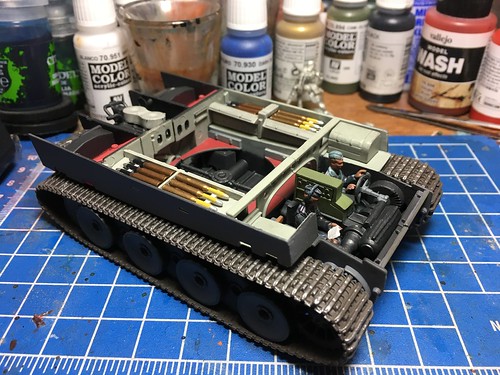 I am always on the lookout for a good deal. I recently picked up online a Targa Japan Maniac Collection 1/48 scale Tiger I tank. It comes fully painted, and has multiple cross sections that allow you to look into the interior and crew of the tank. The model comes in 7 boxes, which combine together to give the complete model (and the boxes also look cool on the shelf). 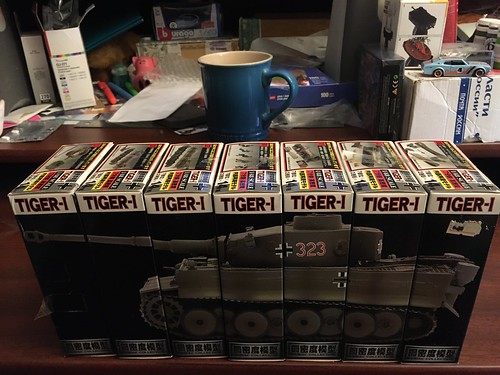 On the back of each box is a breakdown of the boxes' contents. 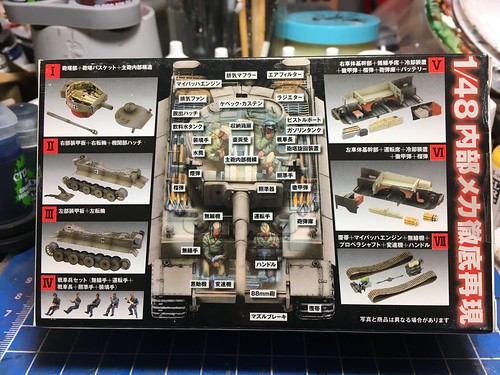 It's an older "kit", dating from around 2006. Back in the day there were three variants offered for sale, in desert yellow, green and yellow camo, and (as mine) in panzer gray and light gray. The construction quality seems to be pretty good; it holds together quite well without the need for cement. Each box comes with a paper sheet on which there is printed copious amounts of information on the Tiger I tank, in Japanese, of course! 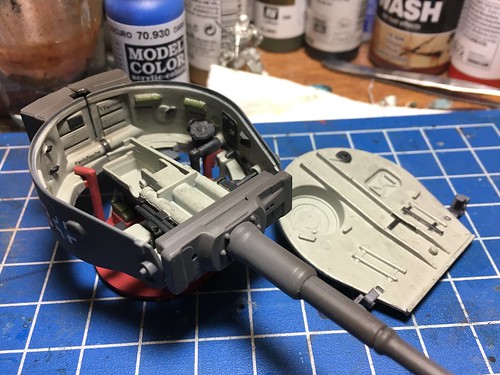 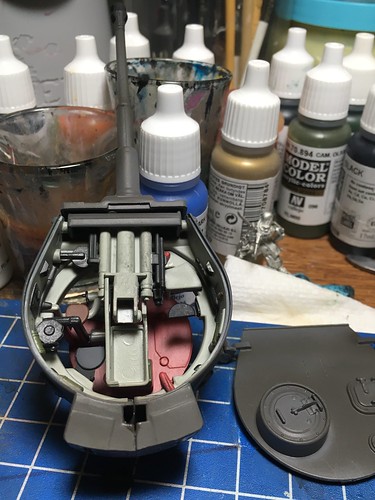 The detail is a little soft compared to modern kits and die-cast vehicles. Some of the mould seams and knock out marks weren't cleaned up before painting. It's designed to be disassembled and displayed, thus the gaping hole seams along the center-line of the tank and turret stowage box are obvious. 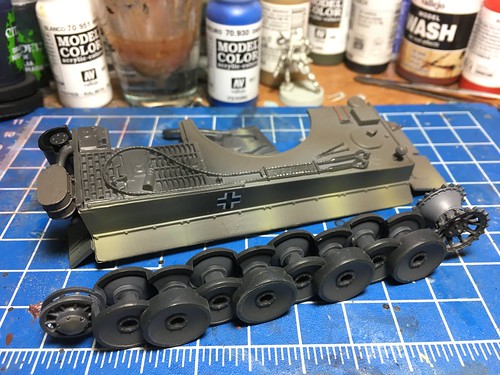 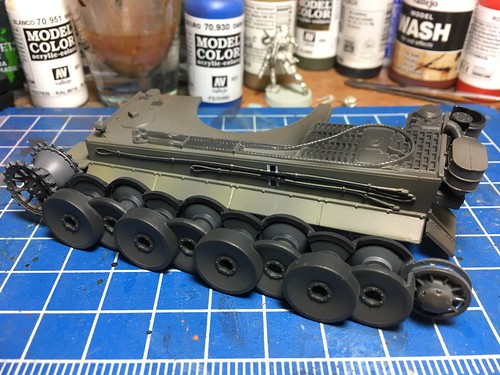 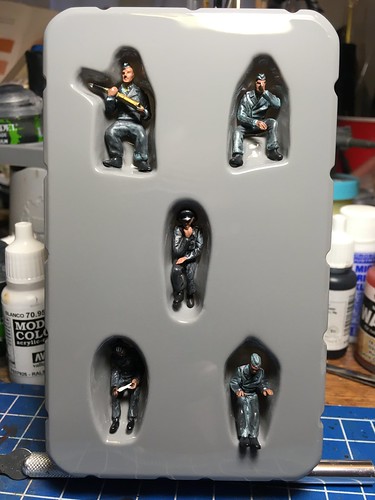 The ammunition seems to be accurately color coded according to German doctrine, with the yellow rounds = Sprenggranaten (High Explosive), and black rounds = Panzergranate 39 (Armor Piercing). 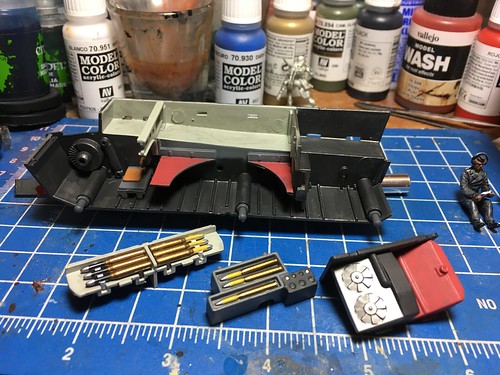 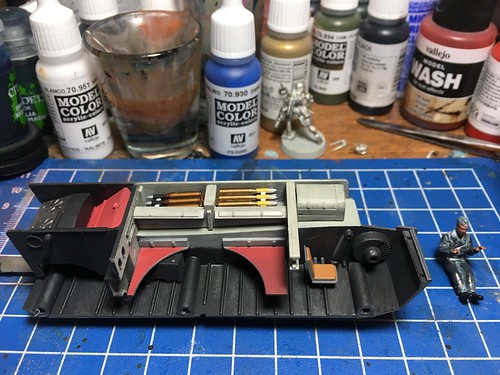 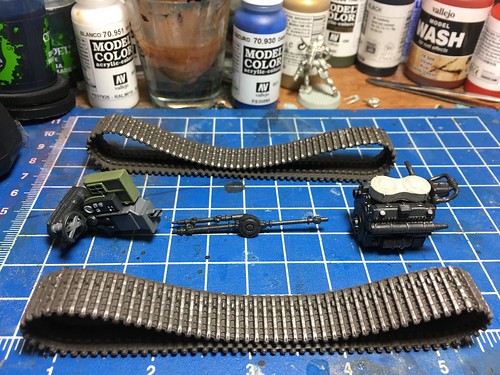 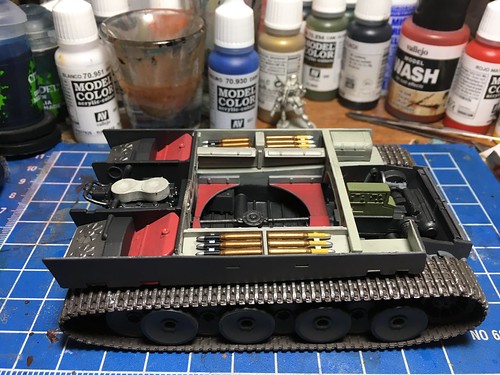 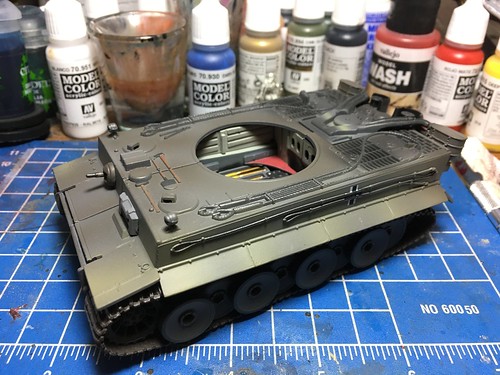 I picked it up for about the same price as an unbuilt Tamiya 1/48 Tiger I (Early Production) model kit (and the Tamiya model comes unassembled and unpainted, of course).

The Targa model was well worth the money I paid for it, despite not being a "serious" model kit. 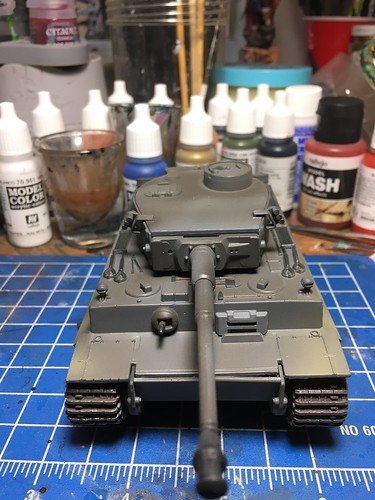 It's perfectly fine for 28mm scale wargaming. Also, I will display it with the turret roof off when I demo "What a Tanker!" at conventions. Though the original tank is huge, there is just not a lot of room inside for the crew to do their jobs. It's a great illustration of why "What a Tanker!" emphasizes the friction of crewing a tank in combat. 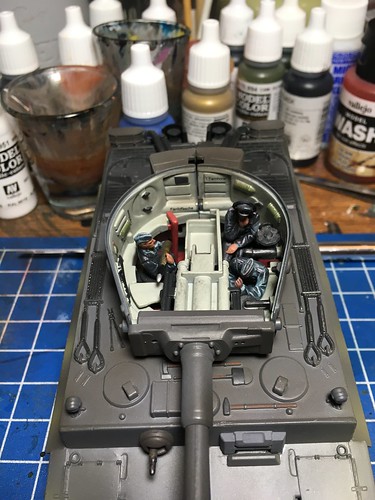 That's really interesting and a good match for 28mm you say?

I know, 1/56 seems to be the official tank model scale for 28mm gaming (cf. Rubicon, Trenchworx, etc.). However, I have discussed this with some of the other Conscripts.

28mm isn't really a scale, it's a size measurement. Depending upon the manufacturer and how they sculpt and measure their models ("28mm foot to eye"?), their actual figures may be 31mm, 32mm, or 33mm tall, and even taller with their headgear. Put that figure on a plastic slottabase or a 3mm MDF base, and they're even taller. Also, consider the heft and bulk of metal figures. The unpainted 1/56 scale resin light tanks that I own (FT, T-26, etc.) don't look like their hatches could allow entry of many of the metal soldiers I have.

If you do a search on our blog, you can see that our group uses a significant amount of 1/48 and 1/50 scale vehicle models for 28mm games like Bolt Action, Chain of Command, and the like. So, models from Tamiya, Hobby Boss, New Millennium, Solido, Verem, etc. are all well represented.

What a cool kit, Dave - that is really neat.

What an impressive and cool modelling set.
A bit odd maybe to use in a game as it is, as you say, meant for display and opens up. S
Strange though that such a model doesn't come as a single kit.
But it is very detailed and seeing the end result it is definitely seems worth picking up.

Thank you for the reply Dave, this certainly opens up a wider range of alternate models. Now looking at the 1/48 Hobby Boss Huey in a completely different light.