The Chicago Show and my new insane project

Back in October, several members of the Manitoba Model Soldier Society went on the annual road trip to The Chicago Show, hosted by the Military Miniature Society of Illinois. The Chicago Show is one of the biggest North American figure shows and competitions, showcasing excellent work from an international selection of modelers. I did not attend this year, but I did send a couple of figures down with the boys.

The full list of award winners is located here. Photos may be seen here and here. This year the MMSS had its most successful year, with several members garnering medals:

Fantasy Painters Gold
Jeff Burns - Angron
Jim Robinson - Inquistor Cortez
Rick Taylor - entire display (Rick's freehand is ridiculous; in the three photos below, note that the figures are, respectively, only 40mm and 25mm tall; the Medusa on the female hoplite's shield is patterned after the famous painting by Caravaggio): 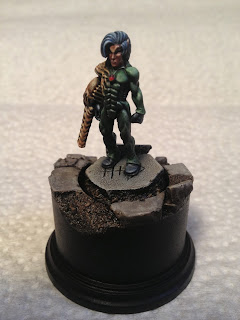 In the last 18 months or so I have only completed two actual figures (not counting various tiny ships for wargaming). I was slowly working on my Crimson Fist Terminators, but Games Workshops' rules for the Imperial Space Marines have changed, yet again. Some of my figs now have illegal weapon loadouts! Sigh.

Hanging out with the MMSS boys for a couple of painting days prior to the Chicago road trip got my creative juices flowing again.

Awhile ago, I played in a great game of Sedition Wars, hosted by Conscript Byron. I really liked the figs, produced by Studio McVey (yet another company owned and operated by ex-GW staffers). I picked up the basic game, which comes with around 50 figs. By my rough calculation, that's about a dollar a figure. I managed to get some more of the Kickstarter rewards on eBay (like some mini-drone models), and I started trolling blogs and forums looking for ideas.

In terms of style, I like the colour scheme done by CorticalBackup, a fellow on the Sedition Wars forums, here. His figs are painted to look like Master Chief, from Halo. Below is one of his female Vanguard Lancers: 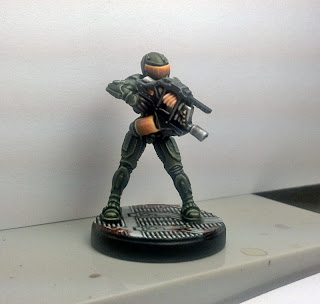 Long story short, I have now assembled 17 of the 25 Vanguard soldiers and drones that I want to paint up. They're made from a stiff plastic that is difficult to clean up; I am averaging about an hour a fig for cleaning, pinning, and assembling. I shall be using my own zenithal highlighting and glazing style, like the Space Elf above. Followed by another 22 Strain models (think Resident Evil zombies and evolving bigger baddies), that will complete the minimum number of figs I need to play all the scenarios in the basic Sedition Wars rule book.

I am too late to enter Curt's annual painting challenge, but this is for me a pretty radical project activity. Wish me luck!
Posted by DaveV at 9:51 AM

Your stuff is always so well painted - I'm glad you got the recognition you deserve!

Thanks for the tour. And congratulations.

First off, congrats on the Chicago medal, Dave!

Secondly, don't mind us if we happen to 'prod' you from time to time to keep you on track for your personal painting challenge! :)