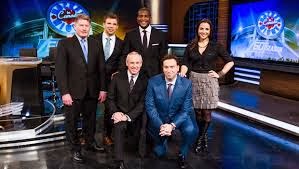 Other than wargaming, one of Conscript Greg's and my shared obsessions is NHL hockey. Of course, being Canadians, we both grew up with Hockey Night in Canada and broadcast personalities like Brian MacFarlane and Howie Meeker. Classic!

However, nowadays we have "the Studio 42 crew" - Glenn, P.J., Kevin, Ron, Elliotte (sic) and the lovely Andi... These guys drive Greg crazy for many different reasons. Glenn and Kevin because they were formerly NHL goalies and Greg thinks goalies have mental disabilities (oh and did I mention I'm a goalie too?), P.J. because he has the intellectual acumen of an "enforcer" matched with the physique of Peter Dinklage, and Elliotte not only because he spells his name with a Smurfette-style extra "e", but also for his fetishization of the "ideal hockey" supposedly played in Europe, where the game is physical but there's no fighting, everyone is skilled but there's room for "role players", and there are never EVER any cheap shots.

Greg calls this "Hockey Night in Chardonnay" and it provides us with tons of laughs while we're background-watching games on Thursdays. So in honour of this motif we're doing a battle-report up HNIC style, with all of the cliches and overdone hockey tropes we love from our broadcaster heroes. On to the batrep... 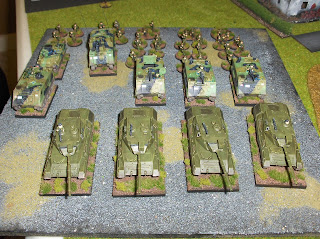 The game was the debut of Conscript Mike's gorgeous modern Canadians, replete with Leopard 1's and loads of M113s. The force might be smaller in size but certainly consists of skill players who are going to bring a high compete level to the game. 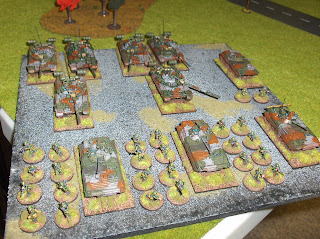 The Soviets are Greg's work and they are outstanding too. The BMPs provide flexible punch but the T-72s and T-80s are the power forwards that will really bring some needed physicality to the matchup. 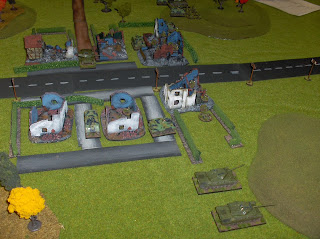 The scenario was a home game for the Canadians - they are tasked to defend a small German village against the Russian breakthrough force. The Soviet objective is to punch through and exit as many elements as possible off their opposite table edge. 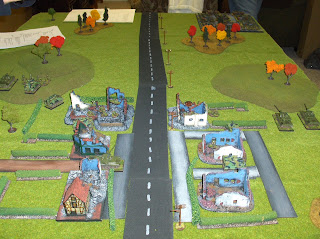 Soviets start from the top of the photo and have to exit from the bottom. Canadians deploy in a neutral zone trap to clog up the middle and stall the Soviet advance. 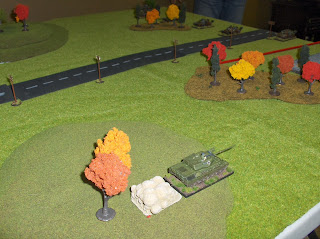 Once the game started I seized the opportunity to send one of the Canadian Leopards forward on a flank. The idea was to gain penetration and get some cycles going down low in the zone. 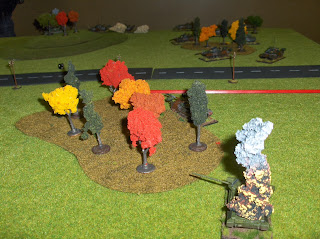 As the Soviets advanced, the Leopard disabled the main gun of one of the tanks but unfortunately the Soviets were able to activate their D and the Leopard was knocked out with a lower body injury. 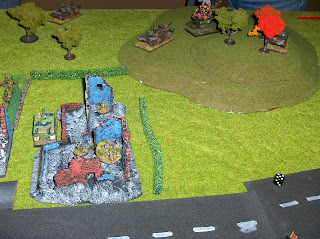 Meanwhile on the other flank the Soviets are pressing hard getting guys to the net. At this point, the Canadians are really collapsing around their net and have decided to play for the single point as the Soviets really have some good jump in their game. 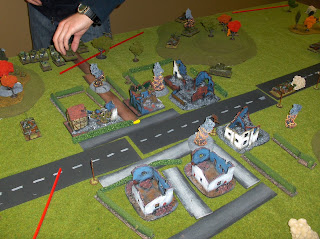 The Soviets really maximized their zone time as the Canadians hunkered down in the village. Getting pucks to the net was the key to their game as they got the cycle going and pummeled the Canadians from close range. The Soviets went to the hard areas and that was the difference-maker.

In the end the onslaught was too much for the Canadians as the Soviets played an excellent road game. The Soviets played a north-south game and really kept their feet moving. The active sticks from the tanks didn't give the Canadians time or space to get anything going. The one dangle from the lone Leopard was fruitless as the rest of the line was off on a change and couldn't provide any support.

You really have to hand it to the Soviets here as they managed the game well, kept it simple, took it one shift at a time, and played the whole 60 minutes. They'll cherish those two points and move on.

Thanks to Mike and Greg for bringing out their superb models and to Greg for running the game!
Posted by Dallas at 11:37 AM

If only visors had been mandatory for the Canadians, I'm sure the injuries from the Soviet 125mm main gun rounds would have been mitigated.

Meanwhile I'm sure the Hockey Night In Chardonnay commentariat will push the NHL board of governors to implement shoot-outs instead of off-board artillery, because some division-three junior league in Sweden did that once and it led to less violence...

Chr*st I hate hockey. And, yes, I am Canadian. AND, yes, I am from the prairies. Apparently I must have been dropped on my head as a child...

Whining aside: Great game guys! It's wonderful to see Mike's new lads on the table (even though they suffered the usual fate for new figures). Beautiful work Mike!

Great looking game. I had to chuckle at the commentary even though I didn't get it some times lol.

I blame the two former Canadian Forces members who decided to throw in with the Soviets.

NATO needs to be sharper at keeping prime resources underneath the salary cap - the Soviets took advantage of favourable entry level deals with a lot of rookies...

>I had to chuckle at the commentary even though I didn't get it some times lol.

Oh man, I just realized I never even mentioned fancy stats like Corsi, Fenwick and Fenwick Close! Now that would REALLY be going down the rabbit hole...