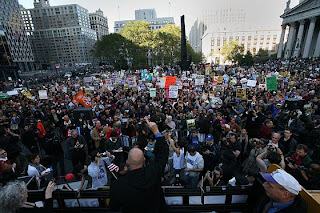 "OCCUPY MORDHEIM! WE ARE THE 99%! WE HAVE DEGREES FROM THE IMPERIAL UNIVERSITY AT ALTDORF AND WE WANT OUR SHARE OF WYRDSTONE!!" 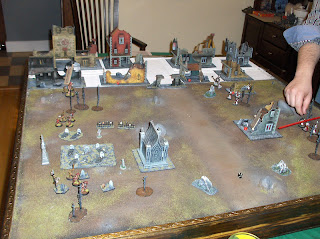 So last week we further amortized the 4x4 table with a game of Mordheim. I supplied three warbands - Vampire Counts, Sisters of Sigmar, and my favourite, Orcs. I say that the last is my favourite because it's composed entirely of old-school models from my youth - Orcs of the Severed Hand, some ancient (1982!) Ral Partha Bugbears, and a Citadel Troll.

Conscript Indo rolled with the Orcs and Conscript Greg B. assumed leadership of the Sisters warband. We rolled a scenario at random and it was "Occupy". 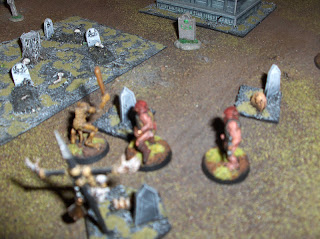 "Occupy" involves placing an objective marker on D3+2 buildings. The game lasts 8 turns, and if you have a model in an objective building and no member of the other warband does, you get a point. The side with the most points wins! Above we see a (blurry- dammit) photo of two Orcs and a Bugbear moving through the graveyard. 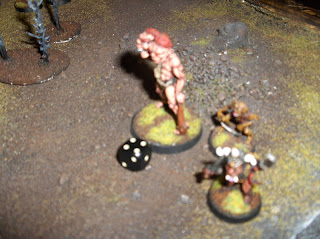 More blur, which is especially annoying since I only had one beer that night. It's the Troll with the leader of the Orc warband and another bugbear. 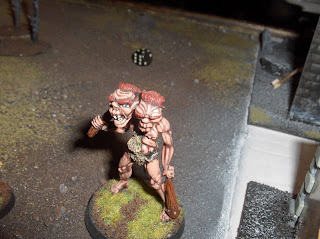 A better picture of the Troll. Easy to get in focus as he did very little in the game... due to Stupidity. Mini-rant follows... the Mordheim rules are not clear at all on the Stupidity rule, in particular whether a leader's Leadership may be used to take the test. In one section it says "the leader's Leadership may be used to take Leadership tests..." and in the Stupidity section, "the model must roll under its Leadership to pass the test." We played it the latter way but with a Ld of 4 the Troll was pretty much ineffective. Will play it the other way next time! 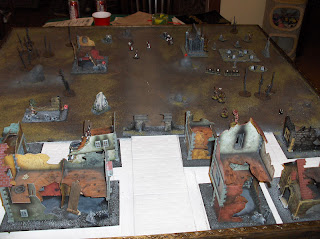 Panorama of the battlefield set on the outskirts of Mordheim. 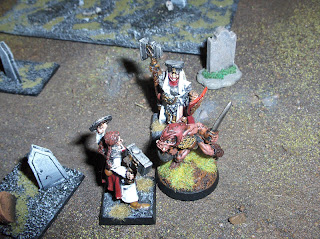 Some Sisters beat on an Orc. This combat was amusing as five Sisters had him Knocked Down, then three took off (below)... then the Orc got up and kept fighting! 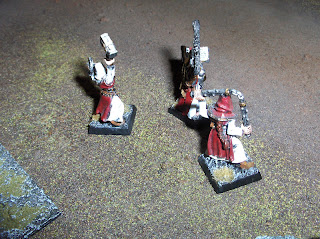 Sisters head off to another objective building. 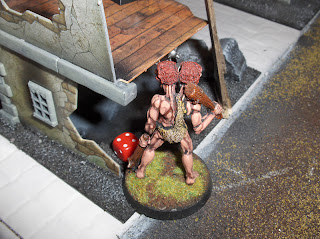 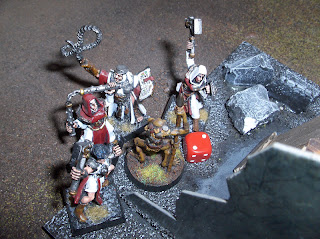 Bugbear feels the beat... in the end the Sisters won by two objectives to one. I really feel bad about the Troll Stupidity rule interpretation since the Troll was a major part of the warband and was essentially useless... oh, except for beating one of his Orc allies to death in close combat after an EXTREMELY unfortunate Animosity check resulted in the Orc attacking him.
I like Mordheim a lot. Small warbands, fast play and some interesting scenarios provided. I also like using the 4x4 terrain board from time to time and it works well for this game. I'm hoping we can use it for a further game in the "Battle for the Farm" 40K mini-campaign!
Posted by Dallas at 11:35 AM

Looks like a great game! We always played the Stupidity rule so that you can use the leaders LD, but only within that certain area (8" or 12"? something like that). Outside of that the leader is too far away to be of influence.
Really nice figures and scenery too!

Thanks guys! Sal - that is the way we'll play it next time too. I felt bad for Indo.