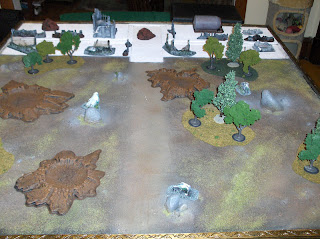 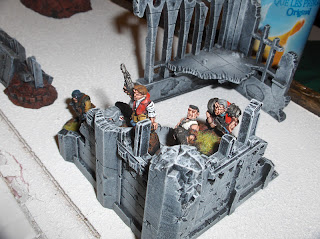 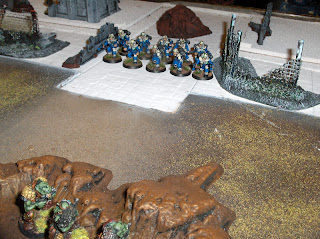 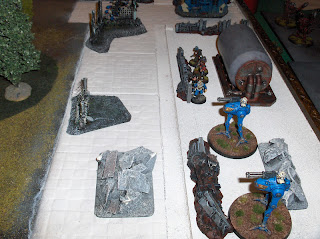 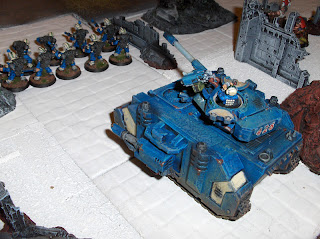 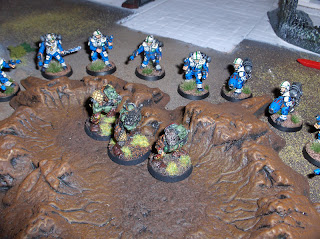 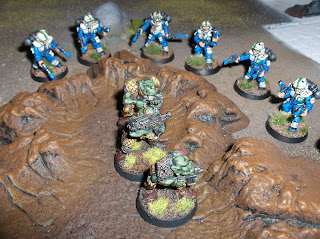 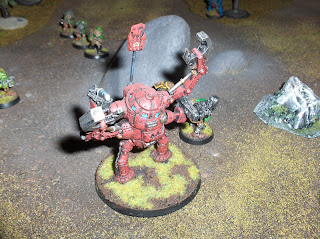 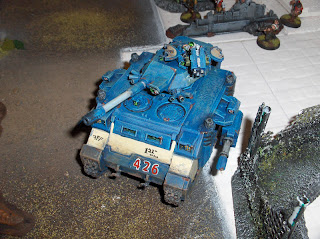 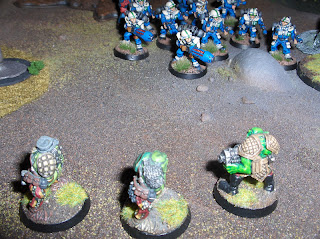 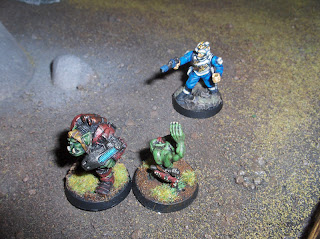 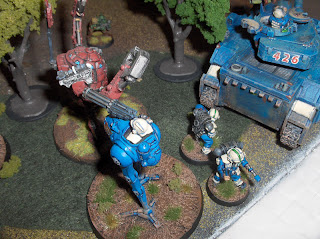 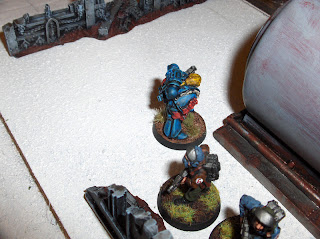 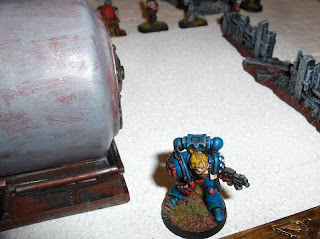 I will honor Lt Phillip McMadd by adding "Mad Phil" to my Rynnsguard. I am converting a Sly Marbo to honor this mad lad! Thank you for the inspiration.

8 years later...
In the wake of Indomitus Crusade's victory on Rynn's World over Prince Rhaxor and his Burning Legions of Khorne. The unkempt and seemingly unhinged Captain Phillip "Mad Phil" McMadd regales his guardsmen of the story of his triumph alongside Pedro Kantor.
"There I was on the outskirts of New Rynn City, my troops stood on guard, eyes peeled to the south, awaiting the arrival of the injured but unbroken Pedro Kantor. Fresh from his grim victory over Thrugg Bullneck at the Battle of Jadeberry Farm."
McMadd looks across his awestruck audience and turns his back.
"From the darkness ahead of us, hulking shadows lurked into a nearby crater. Suddenly the crack and bark of thick slugs from Ork guns shot past our heads. Before I could think, I led the charge to surround the crater to surround the xeno filth"
In a quick motion, McMadd draws his chainsword, revving it to the astonishment of the gathered troops.
"My men rallied to me, and once we surrounded the crater, before the filth could charge to meet us, they died eagerly to the deadly glory of our laspistols."
He points a thumb and forefinger at a trooper and feigns blasting the trooper between the eyes.
"As we pressed forward to meet Master Kantor, a great cacophony of grinding gears arose among us, it had slain several of our valiant brotherhood, before we realized what the xenos had unleashed... Onslaughter Dreadnoughts!"
McMadd stomps a foot as a guardswoman squeals in fear. He grins in knowing anticipation.
"As my brothers-in-arms dealt with the foe, I sighted a greater menace, the vile entourage of the Ork Warboss. I charged blind with rage at the heathens, matching their fury with the roar of my Chainsword. Their flame-bearer missed me with his puny blaze, and he met his end at the end of my blade. The cowards fled before me, and I charged upon their missile-carrier who attempted to end me with a makeshift missile, but to no avail."
"This! Is what saved me!"
He lifts on high a roughly torn tome with a bold, silver Aquila.
"The Imperial Infantryman's Handbook! The crude projectile reflected off of its noble surface, and incinerated a nearby Jadeberry tree. Sparing my life and allowing me to meet the foul Ork with the Emperor's vengeance for our once-broken World."
The gathered guardsmen cheer and lift toasts to him. McMadd continues, his voice just above a whisper but gathering in volume.
"As the rest of the foul Ork posse fled my rage, I was granted clarity as I stood among the foul stinking refuse of my slaughter. I realized that the Ork was but a beast, bested by the strength of Man when need and survival dictated. Much like Rynn's World survived the Orkish onslaught, Mankind shall survive the Xenos threats abroad."
As Mad Phil continued his ramblings, the last of his guardsmen grow tired of the madman's rantings and scurry off to their nests in one of the hundred Ork skulls decorating the wall of the New Rynn City hab-unit. The rodents poke out their heads and watch him hoist his silent, rusted chainsword above his head triumphantly.
Suddenly, as if summoned from the Warp, a loud knock on the metal door of the hab. Mad Phil scrambles over to press his ear to the door. He cautiously thumbs the vox panel alongside the door. "Who's there?"
"Captain" The deep voice of an Emperor's Astartes booms in response. "Master Kantor requests your presence at the Citadel." The voice pauses, almost sensing Mad Phil's rising anxiety. "He has use for your... talents. We have Orks to purge."
A galaxy-splitting grin fills the Guard Captain's face.