In the unrelenting world of future war that is Spacekrieg, all of the future combatants need a helping hand once in awhile. My wife knows this better than any of us, and this is why she (in the guise of Evil Robot Santa) got me a platoon of Old Crow Hammer's Slammers blower tanks to lend some compensated endorsement to the causes of FuturKom, Gunschwarm, and/or the Future Britz.

Of course, even a hot-poop mercenary outfit like the Slammers doesn't run on blower power alone - grunts are required to winkle the other space-soldier out of his foxhole. But what is a suitable match for the old-school look of the OC blower tanks? None other than the NAC Royal Marines from GZG's Stargrunt "true 25mm" range. 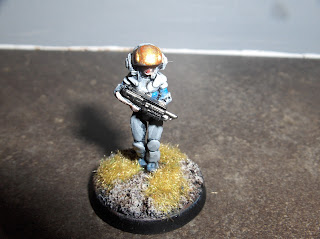 I started off with a test model - a female trooper from the command pack. I'd managed to pick up a couple of NOS blisters (originally distributed by Geo-Hex!) from an online retailer for cheap. I wanted to make sure that I'd be happy with the models before shelling out for a platoon. I have to say I am I was pretty impressed with the quality of the models, especially considering that they must be 15-year-old sculpts at least. 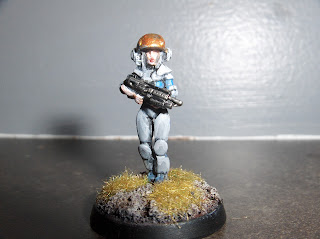 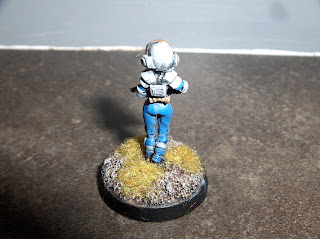 The detail is finely sculpted and the model was super-easy to paint. The flash makes the jumpsuit seem quite a bit bluer and brighter than it is - I used GW Shadow Grey highlighted with Ultramarines Blue. I'll likely put a tactical number in red on the back of the helmet once I figure out the TO&E for the platoon. But as far as models go I think I'm onto some winners!
Posted by Dallas at 9:43 PM

Dude - looks great! Those mercs will be awesome. Excellent to see the collection esclation continue...

I think they are great figures... but they are so small! The Gunshwarm and Komulists will tower over them.

Not 100% sure, but I think the NAC have been resculpted since then. The squad I have in 25mm certainly look "chunkier", but I don't have any of the female grunts so can't be certain.

She looks quite tasty for an old bird.