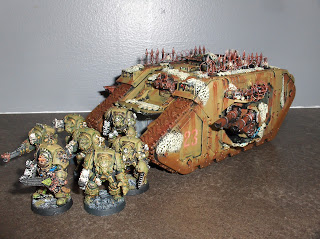 I just finished some more vehicles for my 40K Nurgle Space Marine army and wanted to post some pics... 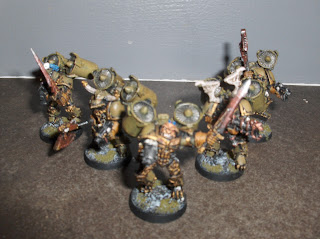 First off, here we have some Chaos Raptors with excellent resin jump packs from Max Minis. The original models had those somewhat ridiculous looking batwing style jump packs which did not look menacing at all but looked more, as Conscript Brian would say, "fey". So away with them! I have five more which will be used to outfit five more new-style Raptors. 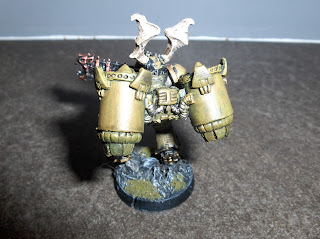 Next, a group shot of the Motor Pool of Nurgle.  I just added two more Rhinos (call signs 2 and 3 below) and a Vindicator that I bought off ebay, that turned out to be from a guy right around the corner (cheers Dan H.)  The vehicles were converted with green stuff and the odd Chaos Spawn bit and then painted to match (as close as possible for me using eyeball paint mixing) the rest of the vehicles in the army. 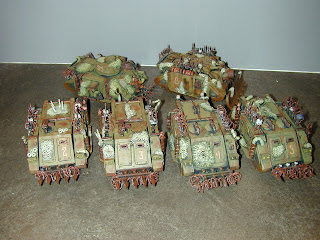 Lastly, the big bruiser... Chaos Land Raider. I bought this off a chap in Toronto through Bartertown and took delivery personally when I was there a month ago or so.  I'm never too much for "work in progress" pictures because I either forget to take them, or don't want to stop to take them when I'm on a painting roll, but here are a couple of shots during the conversion and after completion: 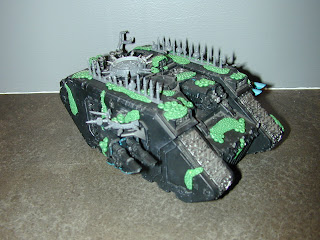 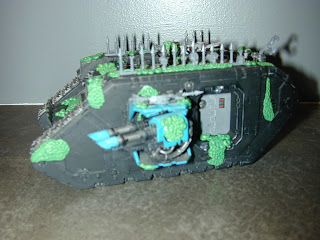 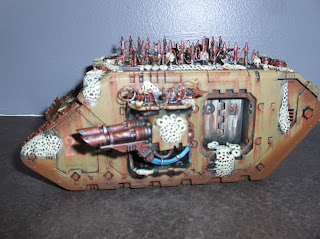 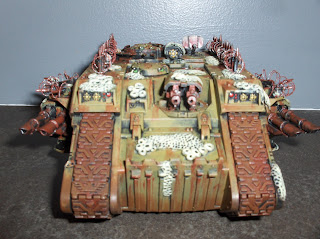 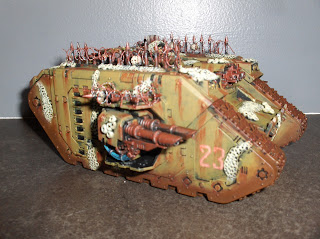 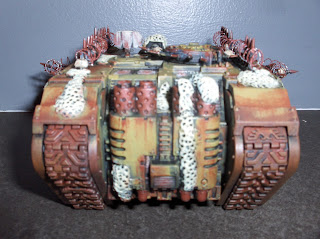 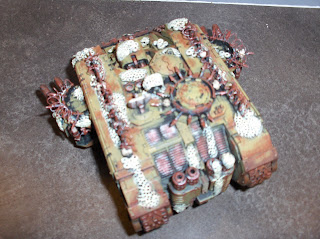 Looking forward to rolling this sucker out, probably carrying Typhus and a retinue of seven (naturally) Chaos Terminators... good times.  Of course with Conscript Indo's and Conscript Mike A.'s Nurgle forces to complement my own 2,500 points or so, we could probably have a really nice Apocalypse game... although with that strong of a representation from the Plaguefather you'd best be advised to bring plenty of hand sanitizer ;-)
Posted by Dallas at 8:48 PM

You know legally you can only have 5 terminators in a Chaos Landraider. The loyalists have special landraiders that can carry more I seem to recall...

Other than that nice work!

I like the new jump packs. They look somewhat akin to the ducted fans on your Blight Drone.

Looks great! That would be great to get all of our stuff together and play a big game.

All Imperial warrantees void when Nurgle is involved...

Nurgle is one of my perfered choices for apocalypse games. All you need to do now is Build yourself a Plague Tower to add to the Apocalyptic goodness.