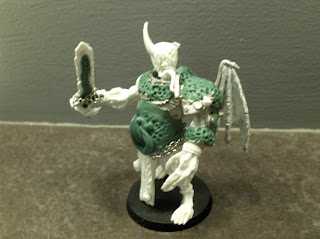 For awhile now, I've been looking for a suitable Daemon Prince to lead my Warhammer 40K Nurgle Space Marines.  I wasn't "feeling" GW's plastic Daemon Princes, and while the metal Daemon Prince of Nurgle is a really nice model in most respects, I always thought that that model was making a face like it smelled something bad, and didn't bring across the full diseased yuckiness of Nurgle.  ﻿These are the guys that wear gas masks to keep poison gas in, for Pete's sake! 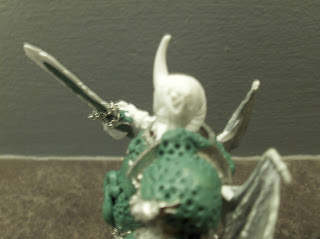 So, I decided to convert a Daemon Prince of my own.  I had been wondering what to use as a base model, when I remembered that our FLGS had a broken up "Battle Brother Artemis" from the 54mm "Inquisitor" range in its used model bin.  This would make a great start on a Daemon Prince, since they're just overgrown Space Marines anyway, right? 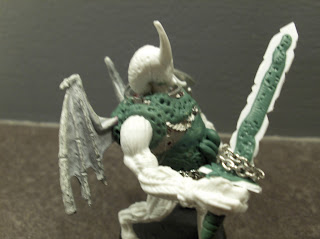 Unfortunately, the parts model wasn't complete, and was missing its left leg.  Fortunately, I'd just come across Troll Forged Models and in particular, its range of modular Daemon Lords.  So I picked up a pair of legs, two arms, a loincloth and head from them for about 12 bucks.  (The wings also came from the FLGS)

The resin is great quality and virtually flash-free.  Once I got these parts, the model went up in an evening and a bit.  I used a ton of green stuff to make the diseased bits and to cover gaps.  Chains came from a Dollarama jewellery purchase today - $2.  The sword was made from thin plasticard. 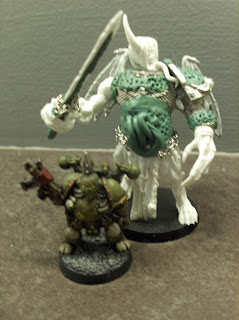 ﻿We'll soon see how he paints up but I'm reasonably happy with him so far.  Thanks a bunch to Ed at Troll Forged for the quick service!
Posted by Dallas at 9:31 PM

Wasn't happy with the left arm - looked like he was wearing a "wifebeater of Nurgle"... so I redid the left arm. Finished painting it last night, pics to follow soon...