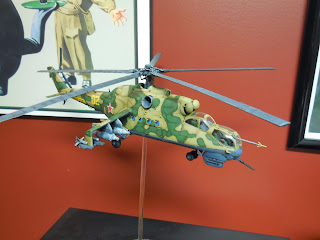 OK, it must have been about 4 years ago that I picked up two 1/48 Hind kits by Monogram in a TMP deal. One of these ended up with Conscript Mike F. and has long since been completed. Mine sat in a box and I decided that once I'd painted the BMP for my chemical Commies, I'd better give them some air-transportability too. 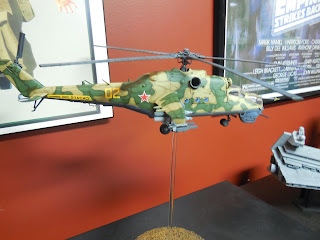 I assembled and painted the model pretty much by the book, although I skipped the detailed interior. I found that the interior parts didn't fit that well and I hadn't intended to include opening doors, so there was no point in doing the extra work. I did heed the advice of Mike F. and rig up magnetic mounts for the rotors though. This was done post-assembly but turned out OK. 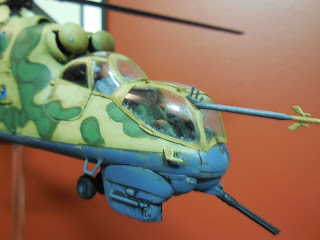 One thing I did do that I usually skip was to use the clear canopy. I usually paint over canopies because either there's no crew included in there, or I'm too lazy to paint them, but this time I made an exception. The crew figures included with the kit are very nice so I thought it would be fun to make them visible from outside. 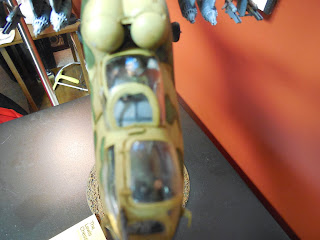 Here's another blurry shot of Yuri and Alexei. There's something very cool about the Hind, it's just a purposeful looking weapon. Looking forward to deploying this one in a game soon. I've got a few goodies in store for my MOPP suited '80s Americans that I'm leaving to start until the Challenge begins next week but I anticipate they'll go up quickly...

That's three 1/48 Hinds between us now - imagine the kind of game we could set up at Prairiecon? :)

That would be epic!!!

Beautiful work Dallas! THREE Hinds?! Wow, that would be pretty spectacular to see. Perhaps you could run them on a 4x4 board like those 40K fast play events. ;)

I have one of these babies, too, but was never too happy with the paintjob. Seeing this ken, I really need to go back to it in due time!

At this point we could do a fairly large 28mm Russian / NATO battle.

It would be cool to see all three Hinds transporting a platoon of Russians into battle...

I know this is way late to the party, but how did you do the flight stand and base? I see the acrylic rod, but how did you mount it to the helicopter and how the base? Is the base just drilled out?