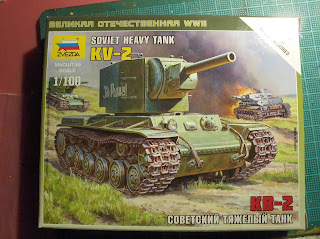 On a recent trip to Calgary I stopped in at the Sentry Box, probably Canada's best game store. Among an armload of stuff (mostly scenic grass tufts for basing, if truth be told) I impulse-bought one of the new Zvezda 1/100 snap kits - a WWII Russian KV-2 heavy tank. 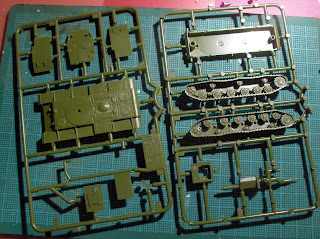 A few days later I busted it open. The model is comprised of 12 (!) pieces which, as you can imagine, assemble very quickly. 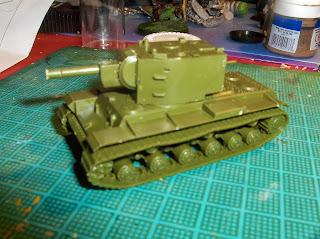 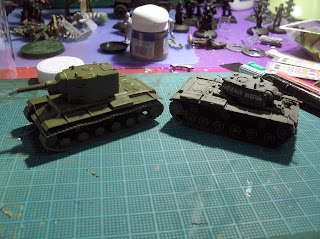 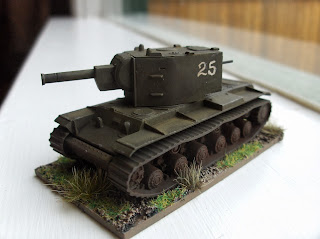 Last night I was watching the hockey game and decided to paint the model. I'd already undercoated/basecoated with the excellent Krylon "Camo" green primer (a dead-nuts match for Russian armour olive) so I just needed to do some drybrushing and weathering, and stick the model on a Greg-approved base ;-) 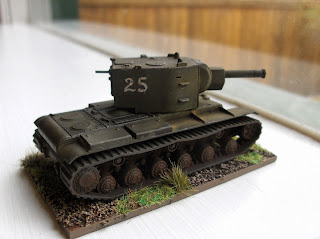 The model painted up very nicely. I used GW Codex Gray to put a few chips in the paint but they may not be too visible. 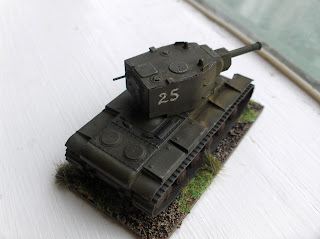 Powder treatment with MIG light dust and light rust powders. Lazily, I decided to use the latter for red dirt treatment on the tracks and lower hull. 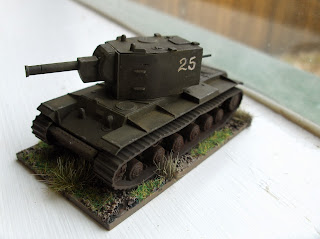 Decals were from the decal folder but only one side worked - the other side fell apart so I trashed it and painted the numbers on freehand. Can you tell which side is which? 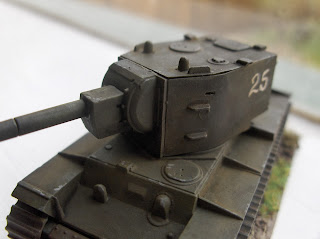 All in all a very satisfying little model and fantastic for gaming - especially at the price - $5.50 CAD!

Looks good. Did you dull coat it? If so, have you figured out how to stop the powder from dissolving?

Thanks Mike! No Dullcote yet, but I haven't historically had tons of problems with it eating the powder...

Looks great Dallas! We have to get that on to the table soon...

I was using the forge world powders and found it removed about 2/3 of it. Are you using a different product? Or is it a technique thing?

MiG and AK both have a product called "Fixer" that can be used to keep their powders in place.

You have to "match" WW2 Russian armor colour? I thought anything from "farm tractor green" to "mud slathered on with mops and rags" was more or less historically accurate.

Anyway, nice little kit. I should try something like this, just as nostalgia for the days when I made plastic models...

Lovely work Dal. I'm going to have to pick up some of this Krylon 'Camo'. Looks to be the treat.