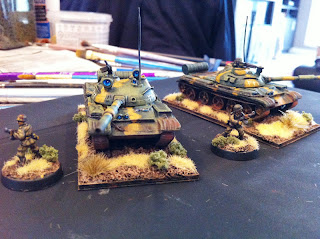 It has been a few weeks since I have posted any progress on my Golan Heights Project, but I haven't forgotten about it.  Here is some progress to hopefully prove it.  Again, apologies in advance for the pictures - whatever its merits, the iPhone sucks for miniature photography, and the lighting in my house does not help...

Up first are a group of Syrian infantrymen.  These are from Peter Pig's AK47 modern line, and the bases are from 15mm.co.uk.
I added a few special weapon troops as well - two RPG troopers and two RPD MG gunners. 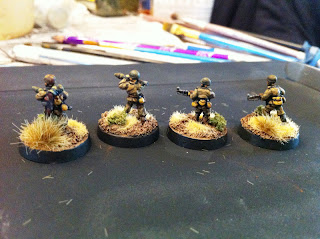 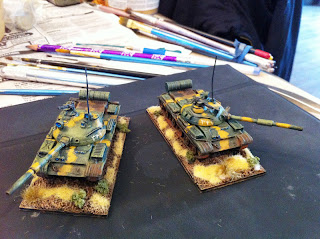 I was amused to note this thread on TMP, posted in august following my original commentary on these models, in which the proprietor of QRF miniatures manages to position each flaw (and there are many of them) with the QRF castings as somehow important to doing a proper model.
Not sure why Peter Pig, Battlefront and others can manage to a proper, in scale MG that isn't cast with the quality of a limp spaghetti noodle, but QRF can't.  But again, the QRF T-62s are really the only game in town for this particular MBT, and the flaws are annoying more than critical.

Up next are some infantry and APCs for the IDF.  Stay tuned!
Posted by Greg B at 5:24 PM

Great painting on the tanks. Fantastic work on the infantry too, really nice work.

That thread is just the kind of reason I avoid TMP wherever possible.

Those infantry look excellent, Greg! I hope we can get them out when I'm out in your parts next.

Hi, I think Quality Castings (avail in US from oldglory15s.com) makes a T-62. I just picked up a couple of their Ti-67's also. And there's nothing sexier than an Isaeli Super Sherman!

I have heard my pal Fran moaning about the quality of QRF before, but the limp spaghetti noodle quip made me chuckle!!

Oh man, I can hardly wait to have a game with these guys!

I believe that Skytrex now have a T62 in their modern range. I only discovered it whilst chatting with the proprietor at Salute earlier this year. Over all a very nice kit, though I think the gun barrel may be a tad on the thin side. You will most likely have to contact them directly regarding this as I recall he said they had forgotten to add it to the web site!

Thanks for the tip Gary- I will have to look into those tanks.