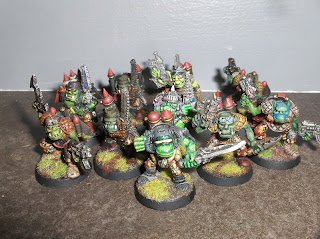 Further in the insane realm of Rogue Trader escalation, I have decided to try and make my Red Star Boyz into a semi-viable army for 40K 6th edition as well. This means diversifying some troop types instead of just fielding an undifferentiated mass of boyz. The first idea I had in this regard was to convert some of the lads into jump-pack sporting Stormboyz. 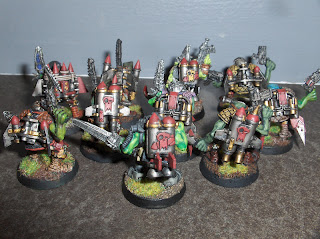 I picked out a bunch of models that were armed with close combat weapons, since "slugga and choppa" is the preferred load-out of the Stormboy. Next challenge was to find jump packs... the old metal RT ones are hard to find and expensive, so I looked to the modern era for a solution... enter the wonders of eBay and the myriad of "bitz sellers" thereon. I ended up getting the modern plastic jump packs, but only using part of each one, leaving off the giant rocket tube and just using the "accessory" part that each pack comes with. 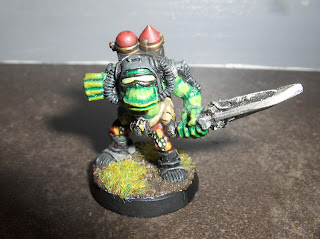 I think they turned out OK - the Nob pictured here can be considered to have a "power klaw" or "big choppa" as the list requires. 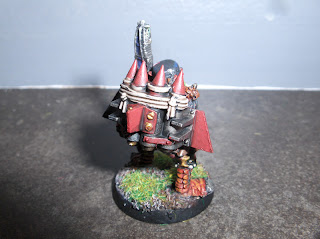 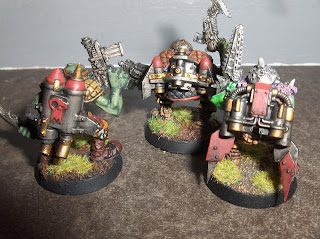 I always liked the idea of Orks strapping themselves up with absurdly large rockets and firing themselves in the general direction of the enemy. Ten Stormboyz with a Nob = ~155pts.  Sorted!
Posted by Dallas at 2:33 PM

They look fantastic! Nothing like the character of these old Orks...

Great stuff Dallas. But I predict they will still be much more fun in Rogue Trader than any version of the current 40k edition...