IDF Infantry and APCs in 15mm

Some more progress on the Golan Heights Project - some IDF infantry and APCs.  The models are from Peter Pig.

Peter Pig's IDF infantry is meant for Lebanon.  In 1973 the IDF troops mostly used SLR-type assault rifles, as opposed to Galils and M-16s that became common in Lebanon.  QRF does offer Israeli infantry, but having seen the quality of their other infantry offerings, I wanted to stick with Peter Pig. So that meant some head swaps were in order!

For this I was following the advice of Mark Kinsey, who has been very helpful and has been pursuing his own projects related to the Golan Heights and Lebanon for some time (see his blog at this link).  Assuming you can navigate Peter Pig's bonkers website, they offer a whole sweep of alternate heads for their figures! It's brilliant.  This way I could use the "professionals" from Peter Pig's AK47 range (models armed with SLRs) and swap out their cloth caps for heads with US-style helmets.

The head swapping is really pretty easy - you need good nail clippers, a pin vice and you are in business. 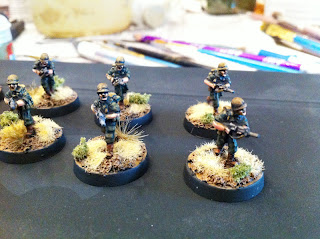 For this initial round of IDF infantry I tried to approximate a couple of squads of guys - some LMGs, some NCOs, a few officers.

For officers I used NCOs from the IDF Lebanon range (again, swapping out the heads).
To represent platoon-level officers I also poached some WW2 US models.  They fit it in OK - only one or two M1 carbines are clearly visible to give things away :)

I also used the WW2 US models for bazooka teams, as there are several reported instances of IDF bazooka troops making incredible stands against Syrian T-55s and T-62s.

The M113s are from Peter Pig's Lebanon period.  There are probably one or two things that would make them technically not correct for 1973, but I thought they were close enough.  The IDF still made significant use of the M3 half-tracks in 1973, but one of the armoured infantry battalions on the Golan in 1973 for the Syrian surprise attack was equipped with the M113s, so I thought it would be good to start with a couple.
I struggled assembling the M113 models.  You would think they are pretty straight forward, but I still found a way to make it complicated...I love painting, but I'm not a very skilled or patient modeller!  Still I think they turned out OK, although one of the M113s looks like it had some kind low-rider modification for a Saturday night cruise here in Winnipeg.
So now it is back to more Syrian tanks - T-62s to be specific.  Further progress beyond that will be limited - Canada Post returned my recent Peter Pig shipment AFTER telling me they would hold it.  So the local Canada Post outlet can ROT.  Peter Pig is watching for the returned package (sent two weeks ago) but there is no sign yet, so the pathetic incompetence of Canada Post will slow this down...
Posted by Greg B at 10:19 PM

I loved the IDF range from Peter Pig and have lots but head swaps....that way lies madness and lacerated fingers!

Beautiful work, Greg. They really turned out fabulous and those head swaps are very effective. Question: what size round base do you use? Are they 20mm in diameter?

Curt - the bases are 20mm rounds from 15mm.co.uk. I ended up using them because I had run out of bases from Litko, and did not want to delay painting while waiting for new bases to arrive.

These bases are nice, but the only annoyance is they have a slot on them - totally useless as I have yet to encounter a 15mm fig with a tab on the feet, and a slight pain to cover over on each figure.

Great work, Greg. 15mm head swaps is true dedication to the cause.