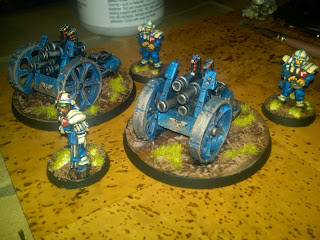 Continuing with my Guard bits and pieces, I found a couple of more old Ebay acquisitions - Thudd guns! With their bonky template and quirky, pseudo-bofors look, Thudd guns were a fun and unpredictable support weapon for Imperial factions in the Rogue Trader game. I was able to get some crew figures for them too - you only need one per gun. Ideally, for the full RT effect, the crew would be servitors, but RT-era servitors are absurdly pricey on Ebay. The guardsmen will do the trick in the interim, until I paint up some servitors from the current GW figure lineup.

The models were a bit dinged (bent barrels, wheels not quite right on one etc.) but they would be a perfect add-on for my 40k PDF troops. In anticipation of tonight's Rogue Trader game, I finished painting them up last night. 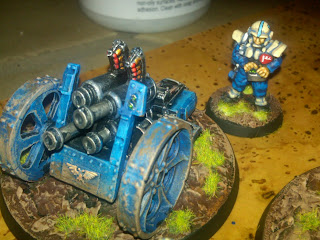 Thudd guns are still around in 40K today - part of the Death Korps of Krieg arsenal -- note the price on that link does not include crew - ouch! Makes Ebay nostalgia acquisitions look down-right cheap. 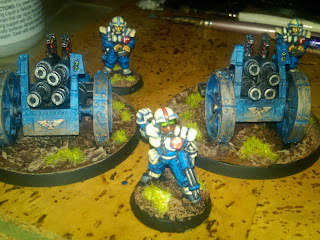 The real challenge will be to see if I can get a template made in time for the game tonight. Cue the craft project...
Posted by Greg B at 8:42 AM

I still got the template. They were in second edition, as were the Hop Splat Field Canon of which I have several...

Oh man... I hope the Ork Traktor Kanon (sic) is a match for those bad boys!!

Love the thudd guns. I have one myself, and remember how much fun it was to work out where that template went next.