A few quick updates for today. First, in the continuing Rogue Trader buzz, I painted up an RT-era robot. 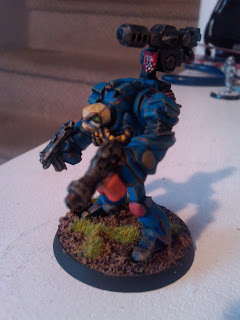 This model came in an OOP blister pack from E-bay, and it was cheap! OOOH!!! But when I got the blister, I saw why - the arms and body did not match. The body was a "Conqueror", and the arms were from some other model ("Cataphract" or something). Oh well. A robot is a robot. The Rogue Trader robot rules are a byzantine suck-fest regardless, so this thing will just end up counting as some kind of dreadnought in a game, and the technicalities of which arms it has won't matter. 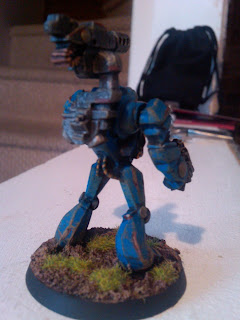 The robot is armed with a bolter, a flamer and a melta-gun. That thing on its back might be a jump pack too. 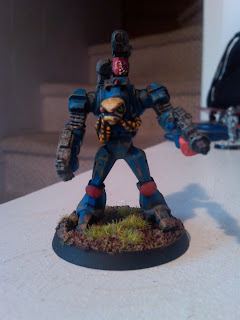 Being an Imperial construct, it probably runs Windows XP. I would imagine the Adeptus Mechanicus geeks would also have built a wi-fi hotspot into it somewhere, so nearby officers can use their Ipads without have to pay cellular data overage and roaming charges to Imperial Telecom Services...
Posted by Greg B at 8:41 AM

Very cool indeed! I think you're overestimated the technical abilities of the Ad Mech though - it probably runs on Windows 40,000 and has a 'plug and pray' data-core interface rather than the heretical wi-fi tech you speak of :-)

Very nice!! Next is to spend a few evenings writing the programs, right? ;-)