"For our game this week we will crack out the 8th edition 40k rules and return to the unfortunate Imperial planet of Toxo IV.  This time, trouble has emerged in the equatorial jungle sectors, with a number of attacks reported on Binary Petroleum transportation facilities.  Planetary militia forces sent to investigate did not return, and scraps of surveillance footage transmitted from servitors shortly before they were destroyed showed only an ominous visage of a deadly Necron warrior, but of a sort never seen before in the Imperium... Binary Petroleum executives called in some favours with senior Imperial officials in the sector, and the Imperial Guard has now despatched one a regiment of Elysian Drop troops to the area." (Blurb by Greg)

"Our Khommunist Leader, His Rivetness Ho-Shi-Minh of the Hanoi Dynasty, has been suffering from metallikh rheumatism for a few aeons. “Research and Innovation” detachments have been sent to various locations throughout the galaxy to find a cure. A reconnaissance group dispatched to Toxo IV found containers full of a smooth substance called “Imperialum Foetidus ad Puppim” (at least, that’s what the label said), that, according to the group commander, could be used for a full immersion treatment for all Viet-crons suffering the debilitating condition of metallikh rheumatism. Plans were laid to develop the location into a spa with full robotic maintenance services when weak flesh creatures interfered."

During the 2016 Painting Challenge, I painted a Viet-Cong style army of Necrons, with rice-straw hats, sepcifically designed as potential opponents to GregB's Elysian army. For about two years now, GregB and I have been planning to have our armies clash in style in a jungle setting. Dallas was kind enough to host the game and prepared a terrain with palm trees and the appropriate scenery. ByronM joined me in directing the Viet-Crons while DaveV, Dallas and GregB shared command of the Elysians. We used the 8th edition of the rules. 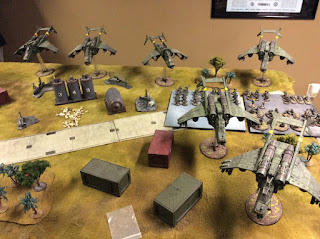 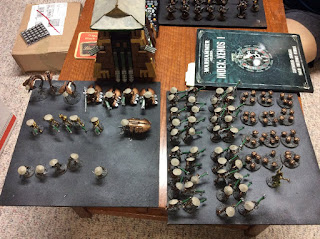 The Viet-Crons, eager to fight the battle against the enemy that inspired their creation. 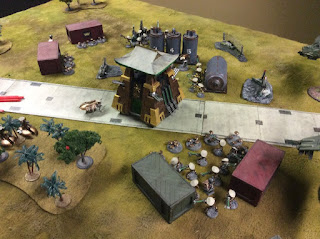 The Viet-Crons had to defend three objectives. Two groups of Warriors as well as the Flayed Ones were kept in reserve while the rest of the army deployed in the middle band of the table. 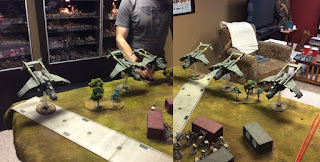 [Cue the "Ride of the Valkyries" by Wagner]. All the Elysian transports entered at the same time, trapping the Viet-Crons in the middle. A few support Elysian elements were airdropped and took position in the surrounding cover. Just for this outstanding opening "scene", I had to admit that it was worth painting the Viet-Crons. 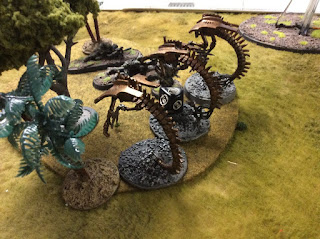 The Wraith quickly took care of some snipers hiding behind the palm trees. 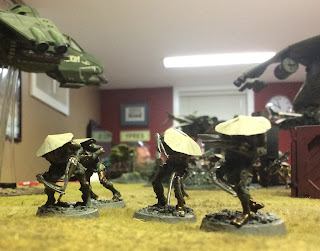 The Flayed Ones mowed down a group of heavy stubbers. 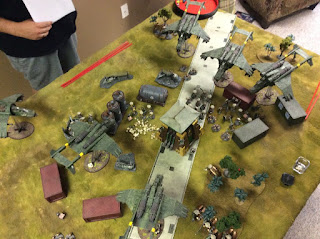 With the simultaneous entry of all the flyers, there was action everywhere! Imagine rocket explosions against the Monolith and strafing runs against the impassible Viet-Cron Warriors. Dallas fired 40 shots against a group of Warriors, but a combination of luck/unluck resulted in no losses for the Viet-Crons. Tough little buggers. 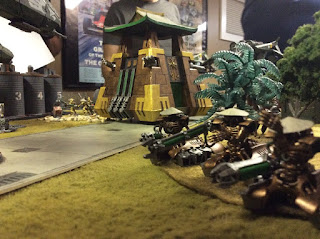 The Destroyers are guarding the approach to the Monolith. 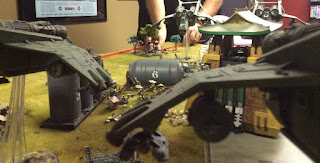 A view from one of the flyers. Multiple rockets were shot at the Monolith, but thanks to the "Living Metal" special rule, the huge structure was able to self-repair some of the damage. 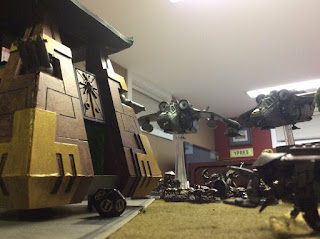 Menace in the sky and chaos on the ground. Elysian troops are trying to break through. 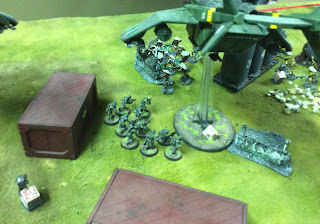 Transports are unloading courageous troops into the fray. What could go wrong? 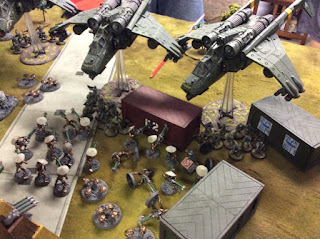 Viet-Crons are pounded with missiles and harassed with close assaults. I must admit my troops are quite resilient, and it takes a lot to decimate a unit. Then there is the "reanimation protocol" that brings back units from the dead. Very handy and apparently very annoying to the opposing side. 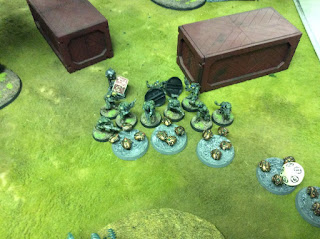 A group of scarabs engaged some weak-flesh Elysians. The little bugs proved their worth more than once. 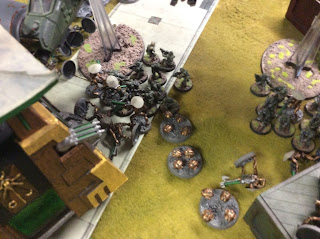 Heavy combat near the Monolith. The Lychguards would eventually catch up to one of the flyers and crash it down. 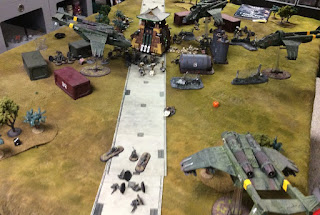 A view of the intense battle near the Monolith. 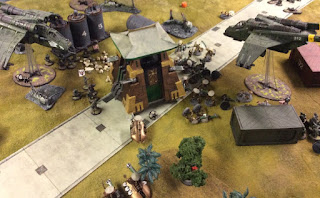 The final shot of the battle, showing lots of de-activated warriors. At this point, the Elysians had too few ground units left to claim more than one of the three objectives. 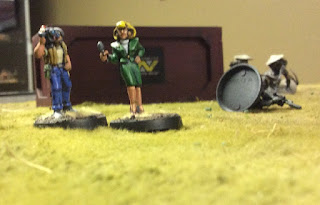 Imperial News Network (INN)  sent reporters for live coverage of the "Cleansing of the Xenos" mission. 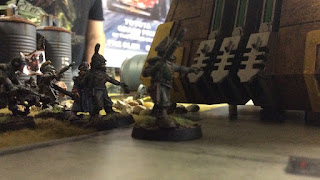 The Elysian commander pointing at a weak spot in the metallic structure, just seconds before a particle whip separated the atoms in his body.

All in all, I had a lot of fun playing this totally crazy battle, with combat and explosions all over the place. The cinematic of this game was on par with any Viet-Nam war movies. Thanks again to all those who participated.

Great AAR Sylvain. I confess that 40K has absolutely zero appeal to me, but the photos are great and it sounds like the game was fun.
Cheers
Peter

Intense and great looking game, I understand with INN has sent reporters, the event must be covered!

This was a lot of fun Sylvain! It was great to finally encounter your awesome "Viet Cron" on the table. The Elysian pilots will be telling scary stories about this battle for a long time...

Great painting, pics and report, Sylvain. Thanks again for bringing out your army (and the beer)!

Brilliant AAR! Yet another fine example of the Imperium winning the Hearts and Minds of a friendly(!) race.

It became necessary to destroy the facility in order to save it...