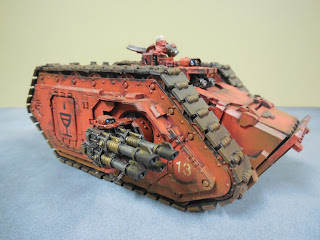 Part of the appeal of the Horus Heresy as a 40K milieu is the sheer immense scale of everything. Where 40K has thousand-man Space Marine Chapters, 30K has hundred-thousand-man Space Marine Legions. In 40K we have 10-man tactical squads, in 30K 20 models is de rigeur. And where in 40K the Land Raider is the Daddy, in the Heresy era the Space Marines rolled in this beast - the Spartan Assault Tank. 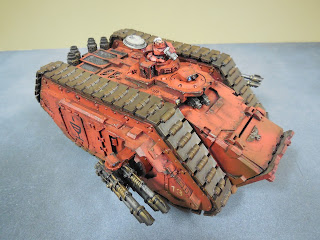 Sporting twin-quad lascannons, heavy bolters, and a faintly ridiculous troop-carrying capacity of 25 models, the Spartan is the preferred assault transport for the discerning Legion Praetor. 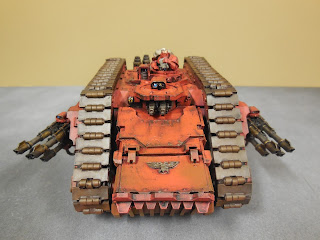 The Spartan is a massive kit, to be sure. Assembly was reasonably straightforward even if the vendor I obtained it from neglected to supply instructions. The only non-kit part I added was the sensor pod mounted above the hull twin heavy bolters - it's from the plastic Land Raider kit. The vehicle commander figure is from the Forgeworld Space Marine vehicle crew set. 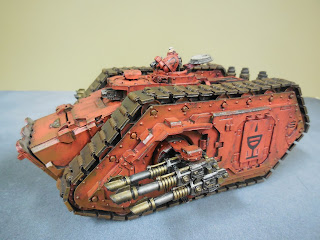 The sponson weapons on this machine are just super-cool too. I magnetized them both for easy transport and painting, and because the kit parts were a bit malformed and wouldn't allow articulation without some serious work. With the magnets, the weapons can easily elevate and depress. 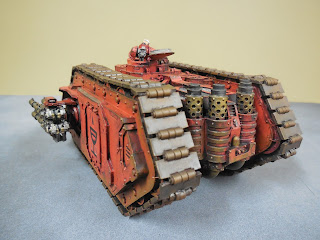 The tracks, a source of much pain on Internet fora, were not good, but were not as bad as I'd feared. On one side they were so bad that I had to cut out one link altogether, but this is on the bottom run that can't be seen. The other problem was with the side doors - they just didn't fit and couldn't be modified. I cut new doors out of plasticard. 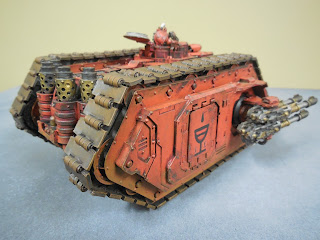 Decals are from the Forge World "Blood Angels" sheet. 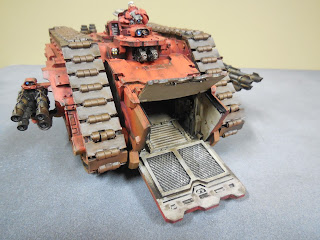 Doors are always a pain point for me, but this vehicle is so cool that it would be a shame to seal it up. I can never seem to make Land Raider-type doors stay shut, but I address this by adding small pin to the top door that fits in a hole drilled in the face of the bottom one.

This is a vehicle that I quite enjoyed painting, and its tabletop presence will be undeniable, even in the context of large Heresy games. At 295 points plus upgrades, it's not cheap, but to me the "looks cool factor" is off the charts.

That is one sweet ride Dallas - well done. Those quad lascannon sponsons are pretty darn rude.

How do they justify charging so much for a kit that apparently fits together like a $5 Hobbycraft jet model? Anyway you sure made it look nice... and lethal!