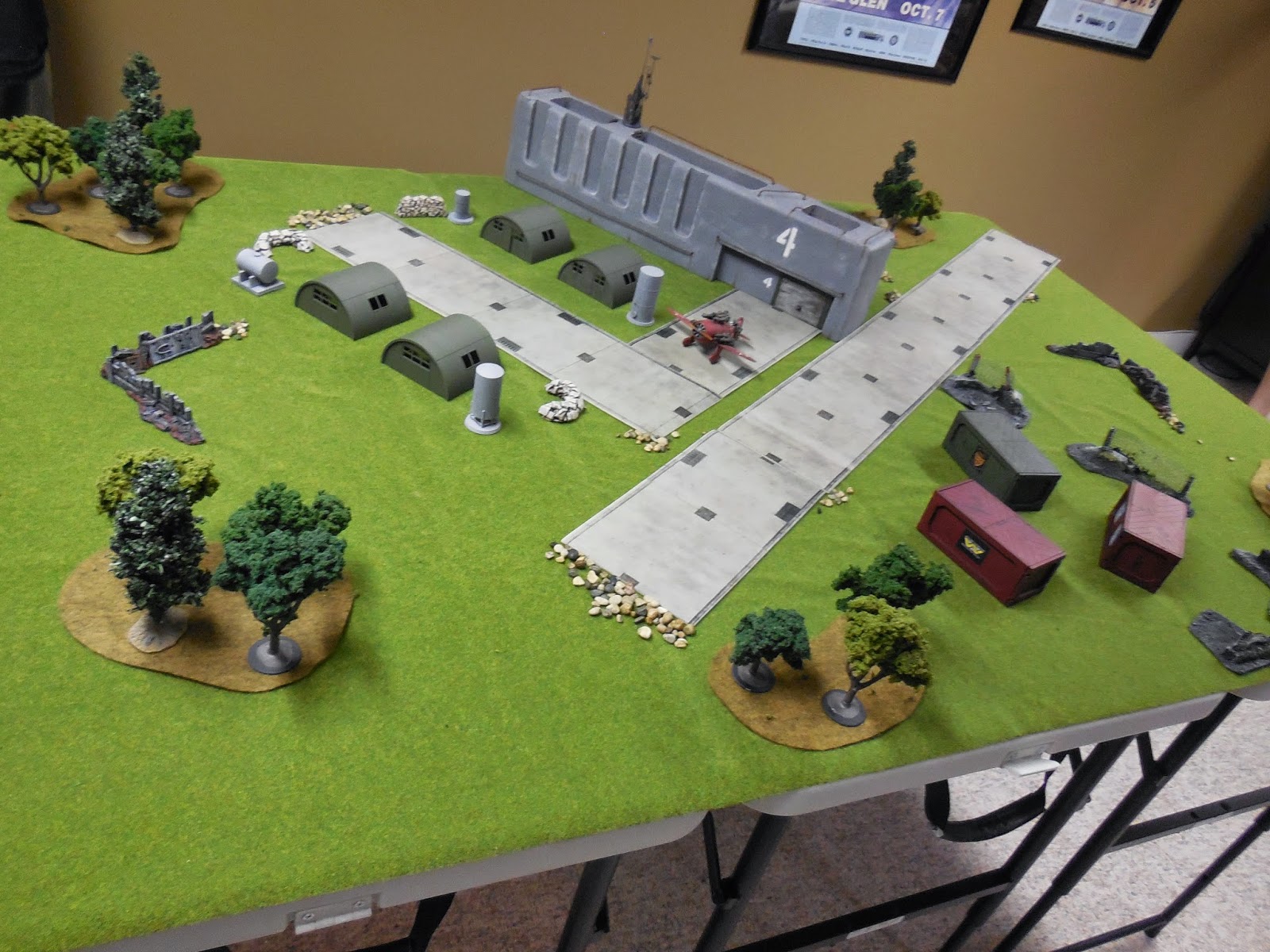 Last week we were happy to welcome back "Founding Conscript" Curt, late of the Western Chapter. So what better way to celebrate than with a game of 40K ;-)

I kid, but only a little. We wanted to try the "new 40K" again to see if it would be as much fun as we thought it might be after the last game - plus Greg was looking for some redemption for his Valkyrie bunch. 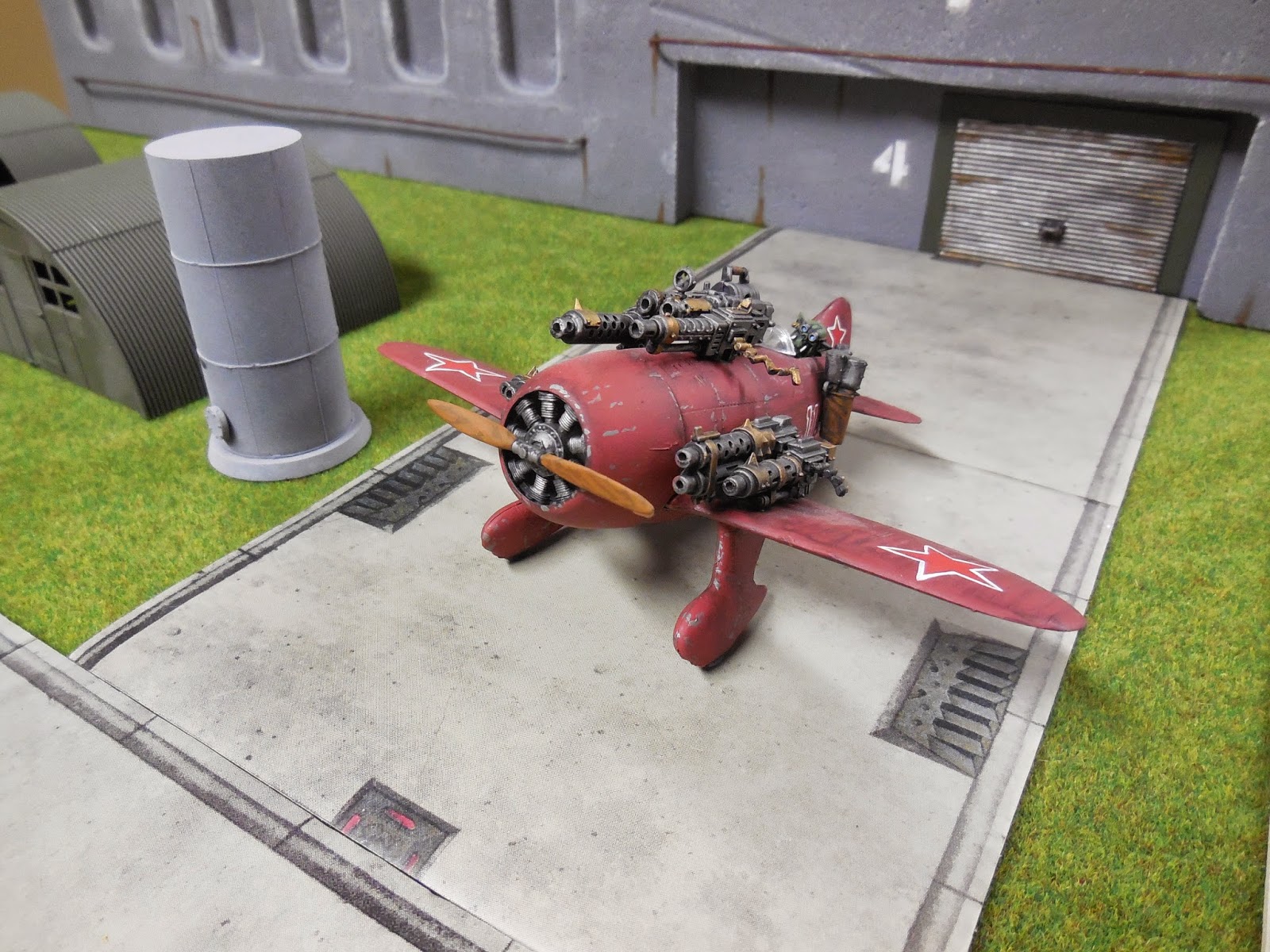 So instead of using masses of cards and random scenarios, we decided to play a real narrative game. Old Imperial adversary "Da Red Barun" (above) has been raising Hell on Rynn's World, but the Imperial defenders haven't been able to locate his base. A patrol of abhuman veterans happens on the makeshift Ork airbase and calls in Valkyrie-borne reinforcements. The Barun himself is passed out from fungus intoxication, sleeping it off in the cockpit of his plane. The object of the game is seize da Barun, and the side in control of him at the end of the game gets 3 VPs. Victory points are also scored for Kill the Warlord, Linebreaker and First Blood, as usual. This IS 40K, after all ;-) 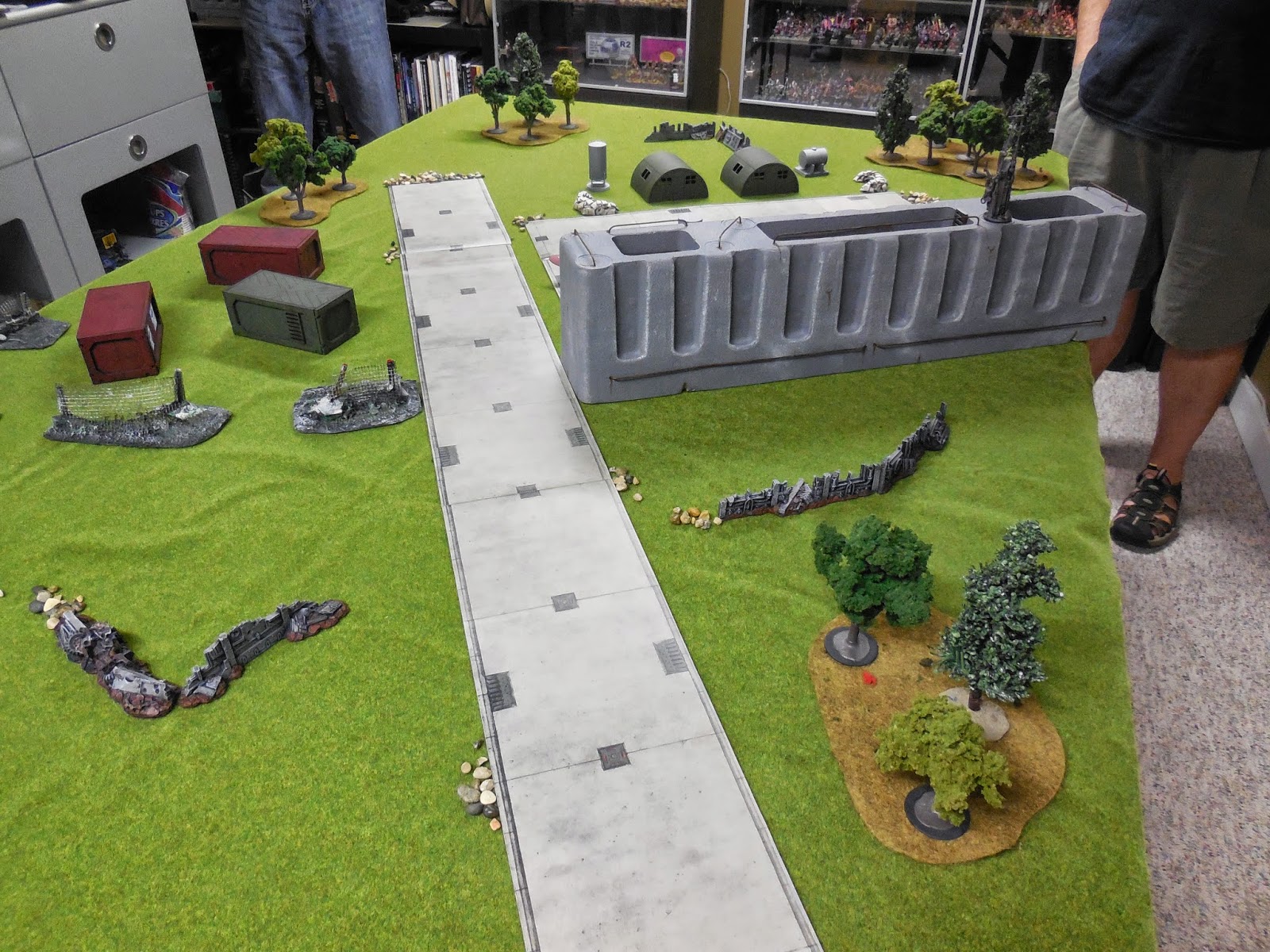 I laid out the terrain as an Imperial installation that's been captured and turned into an Ork airbase. 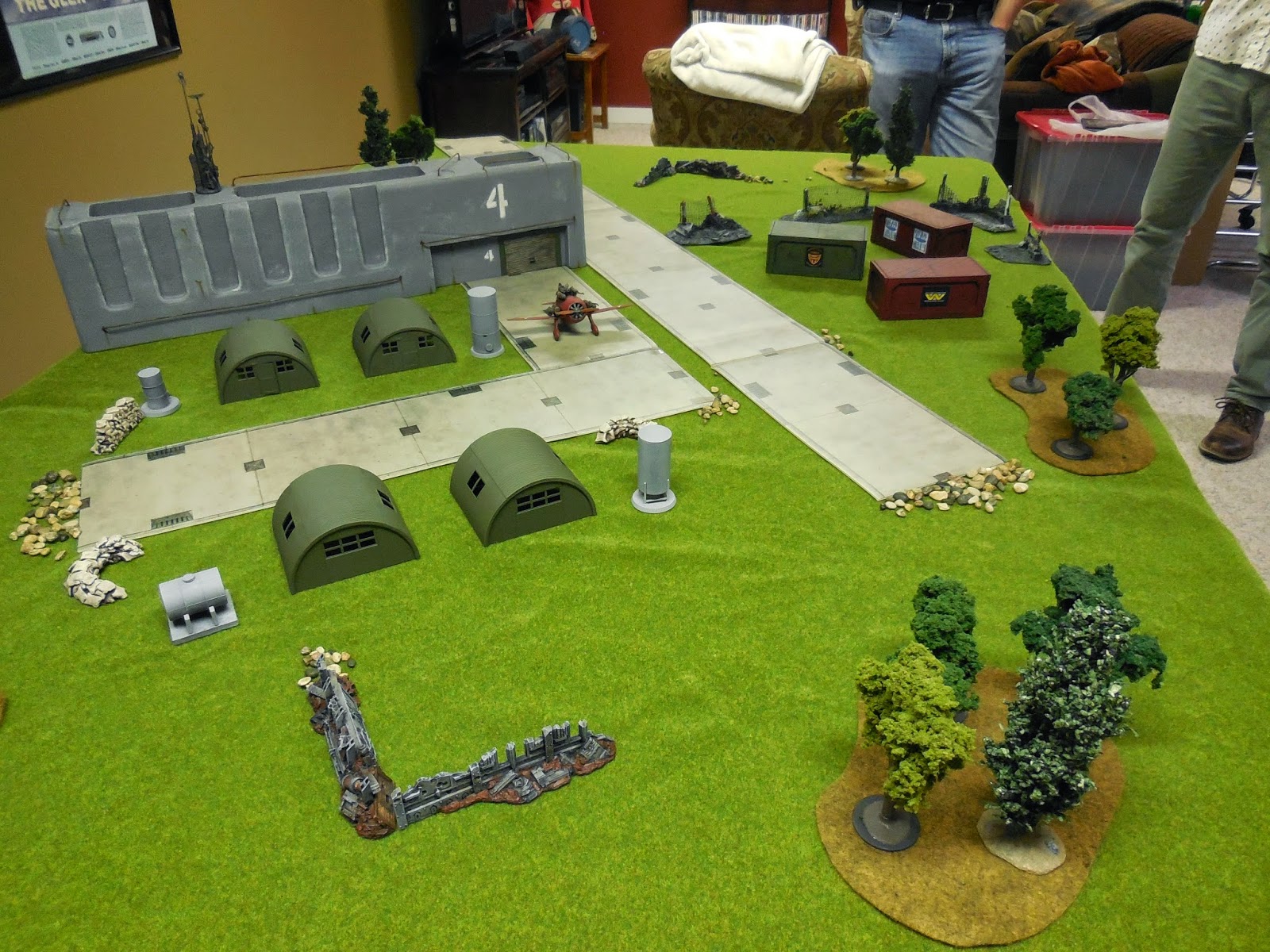 It was also the first chance I've had to use the cool Quonsets I picked up from the Dust range! 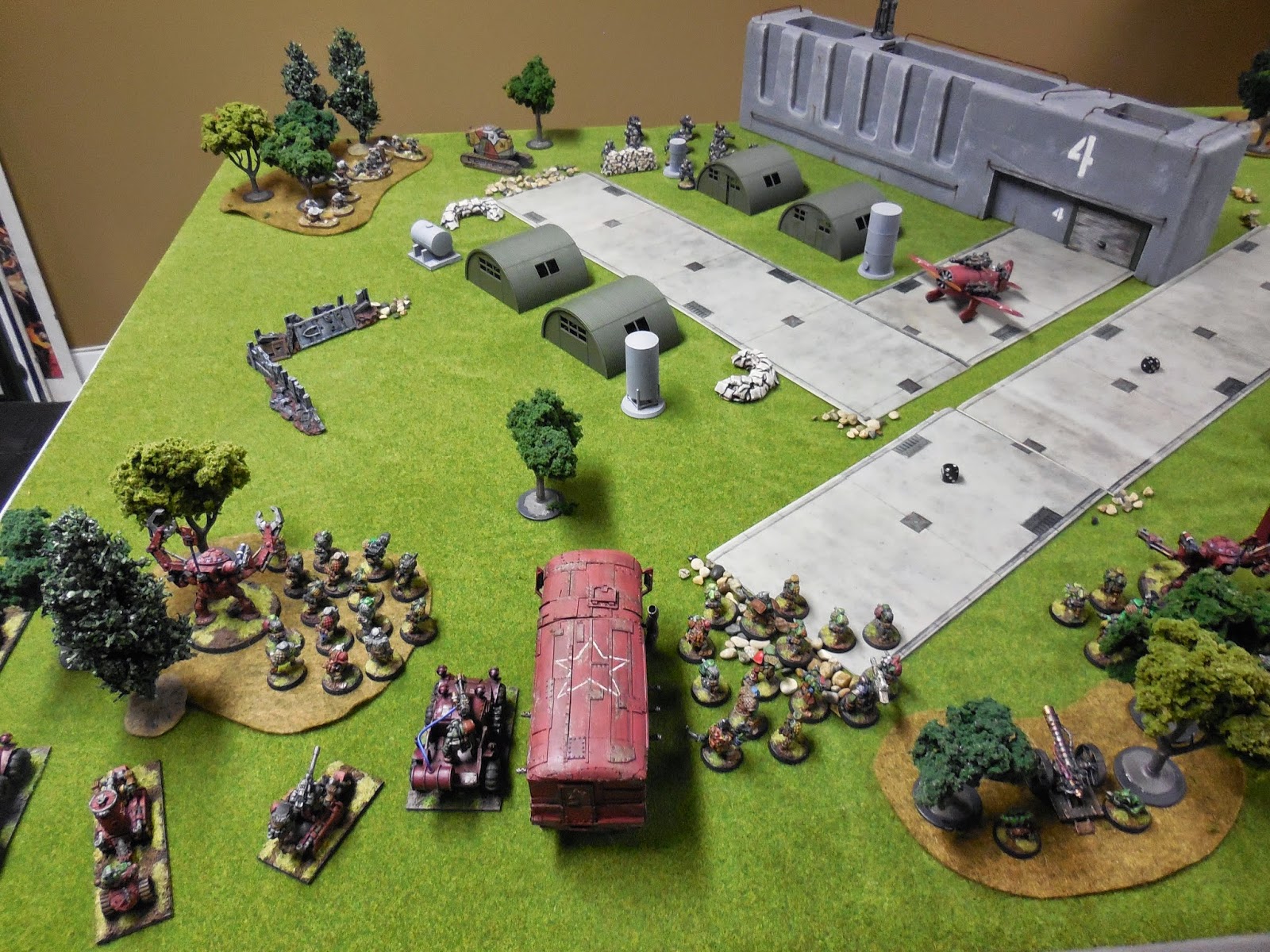 First turn and off we go! Conscripts Mike F., Indo and me ran the Ork horde, which consisted of three mobs of 15 boyz, five assorted warbuggies and Skorcha half-tracks, two Traktor cannons (Skyfire!!), a Trukk with a mounted quad-flakka-dakka gun, two Deff Dreads, a squad of 10 Stormboyz, and lastly another Trukk with five meganobs and Warboss Irongob. 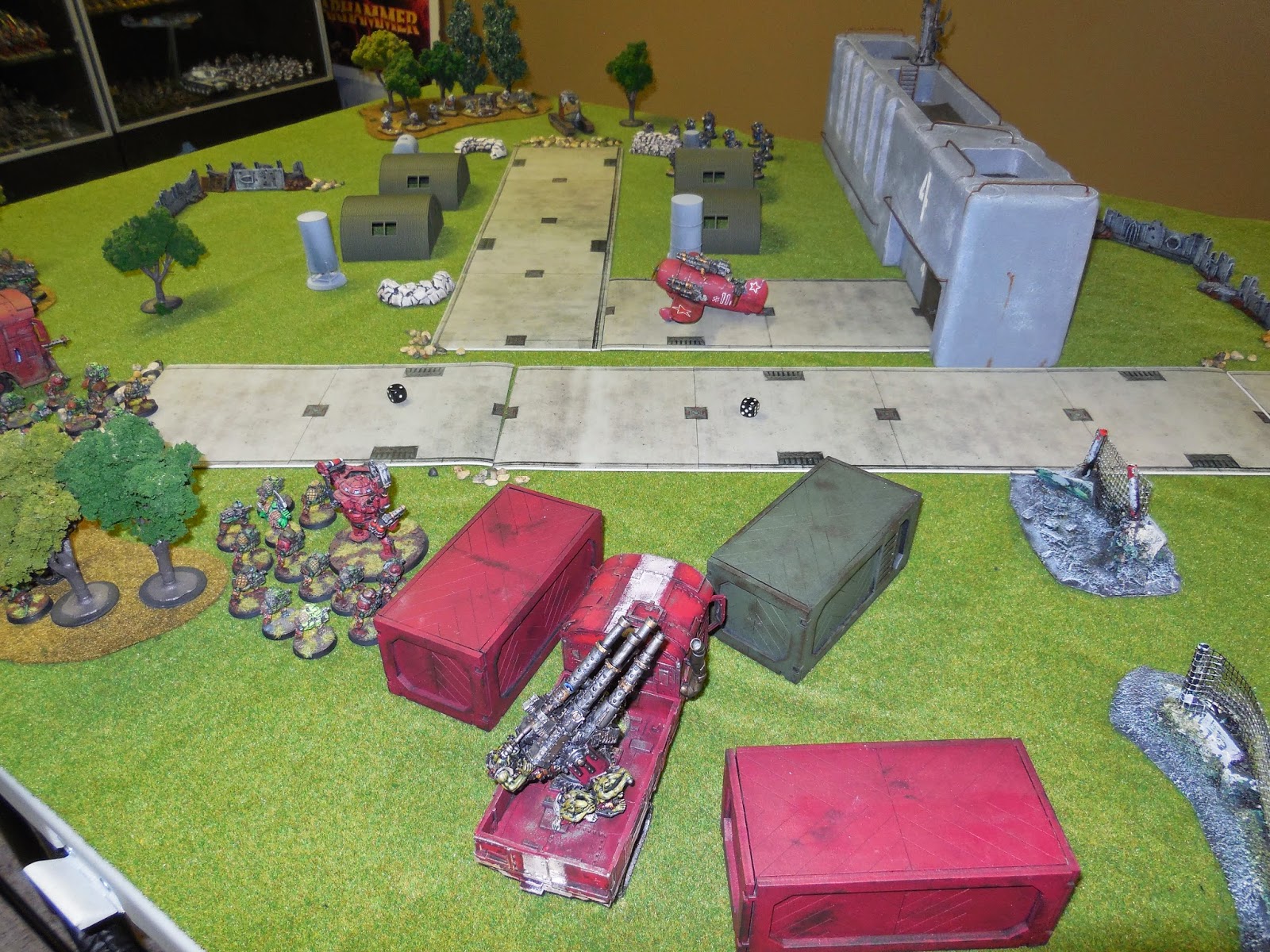 Here's the quad flak on the lookout for Valks... Conscripts Greg, Curt and Byron rolled out the Guard - a veteran squad of very cool Quar models and their Quar-mera (visible at top left), some of the new Tempestus Scions, and three Valkyries full of troops. You can just see the Scions behind the Quonset at top centre. 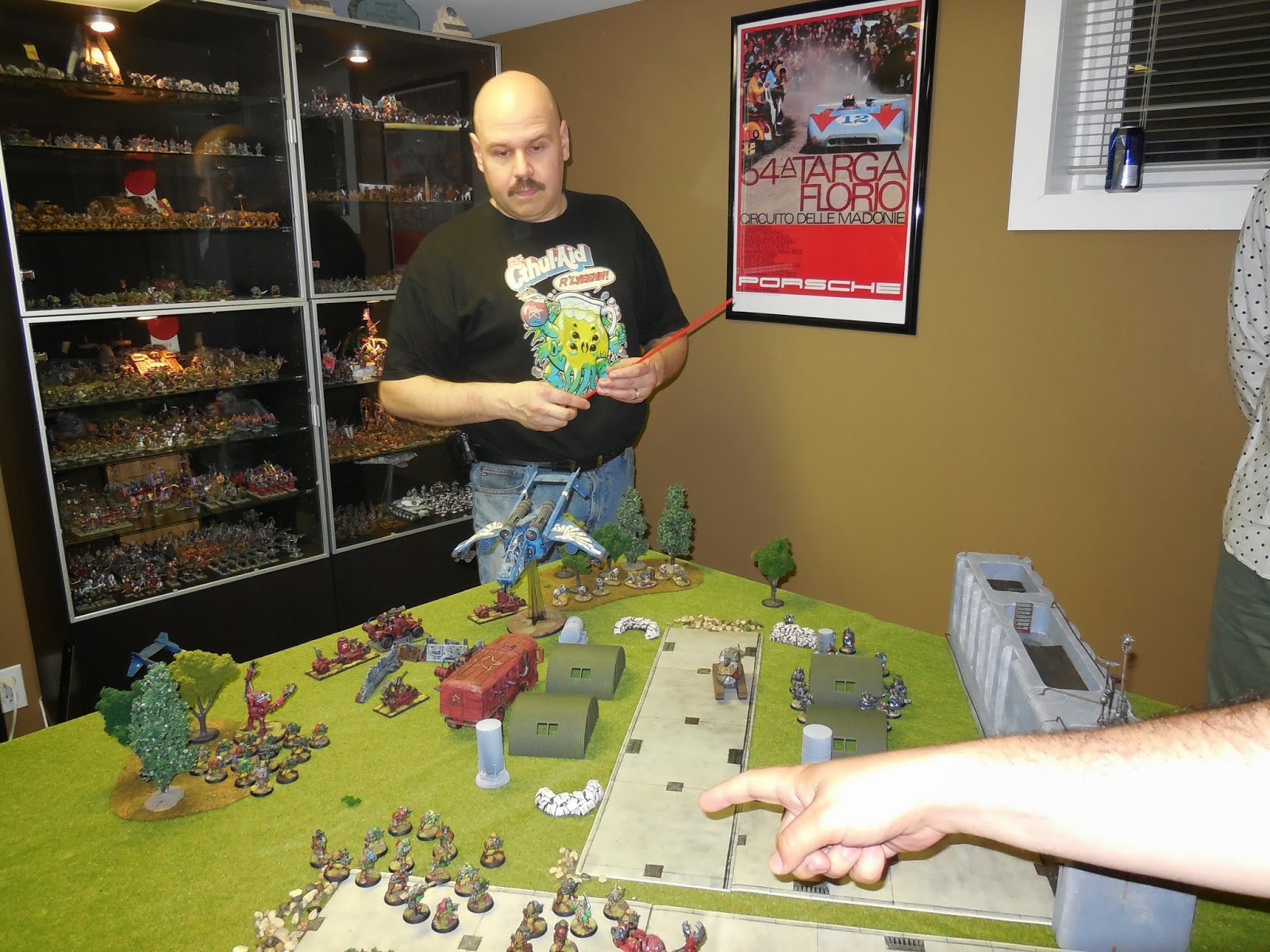 Here's Byron plotting his next move as a disembodied hand points the way ;-) 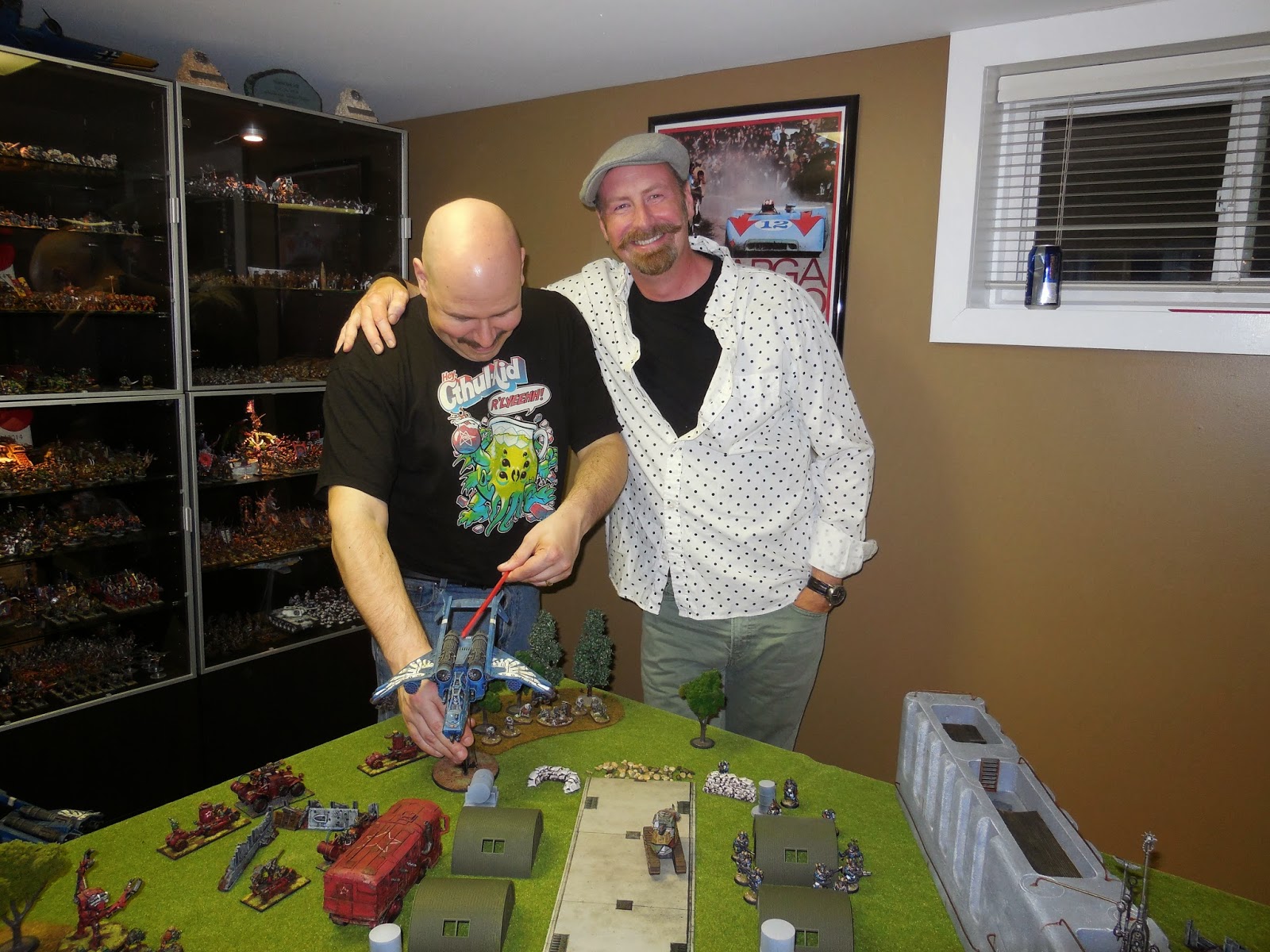 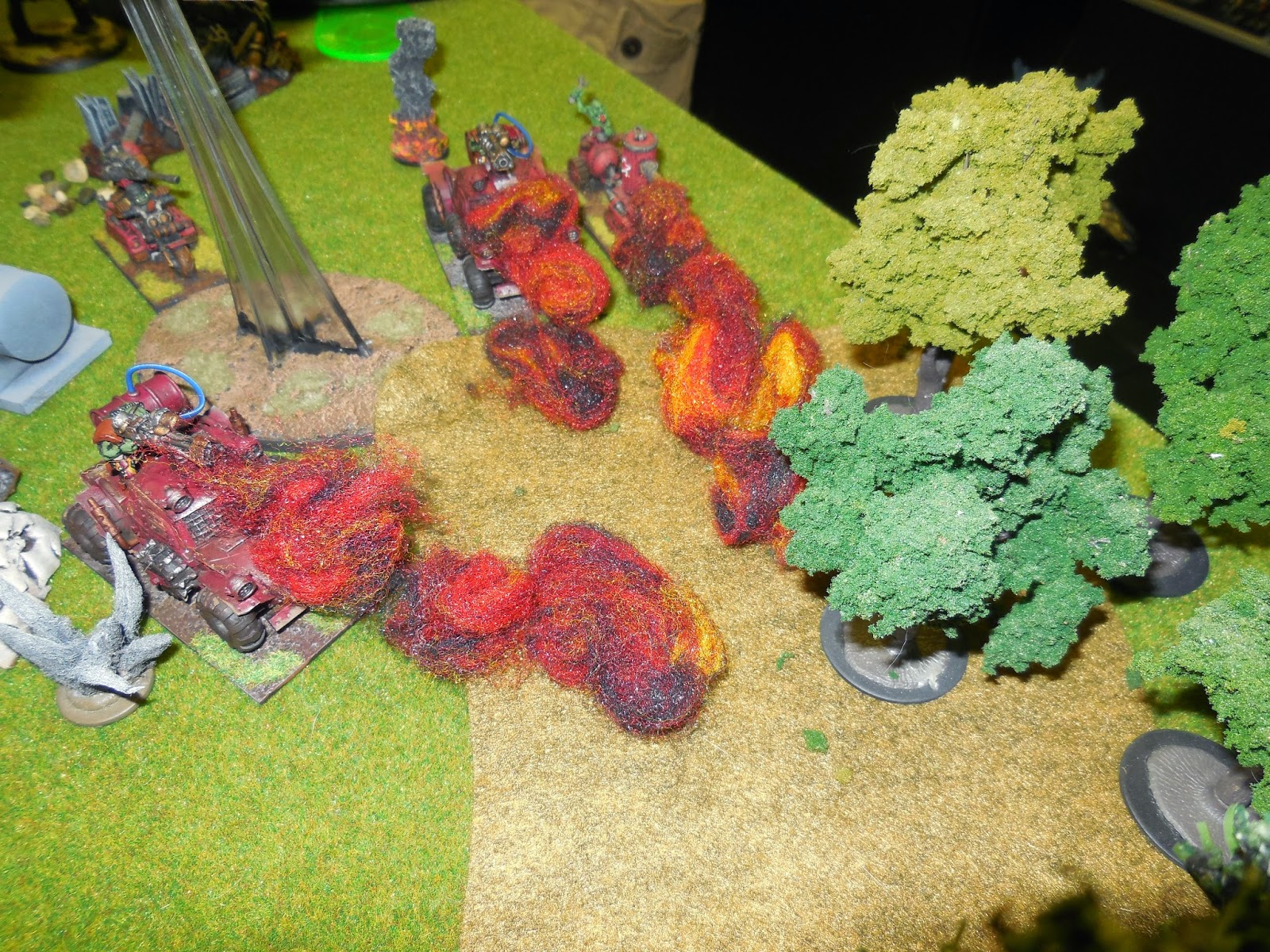 ...as his Quar head for Kenny Rogers' Roaster... 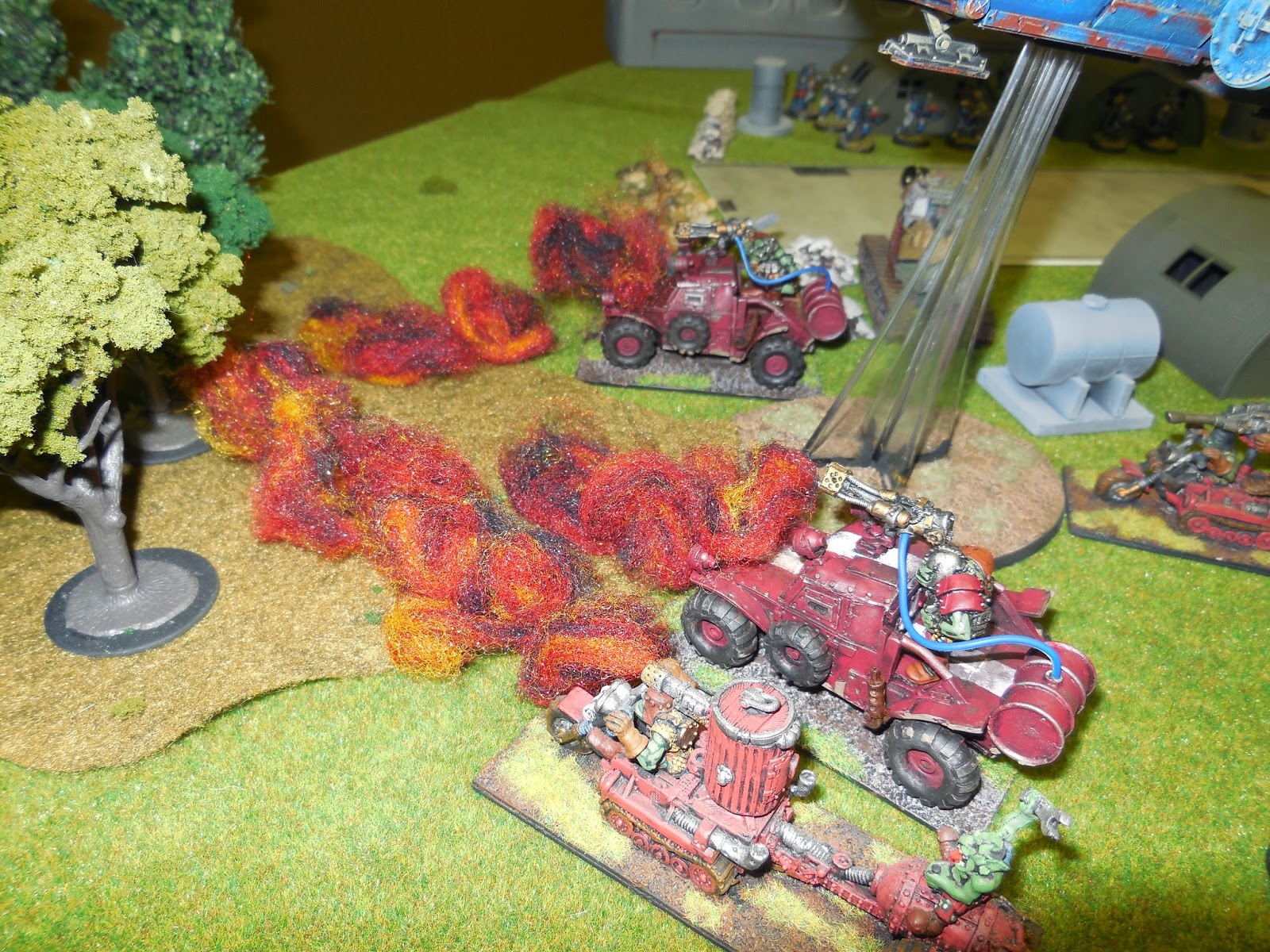 Indo made a beeline for the opposite table edge where the Quar were positioned in a wood. Skorchas are nasty... in little time at all the Orks were up 2VPs to nil with First Blood and Linebreaker. 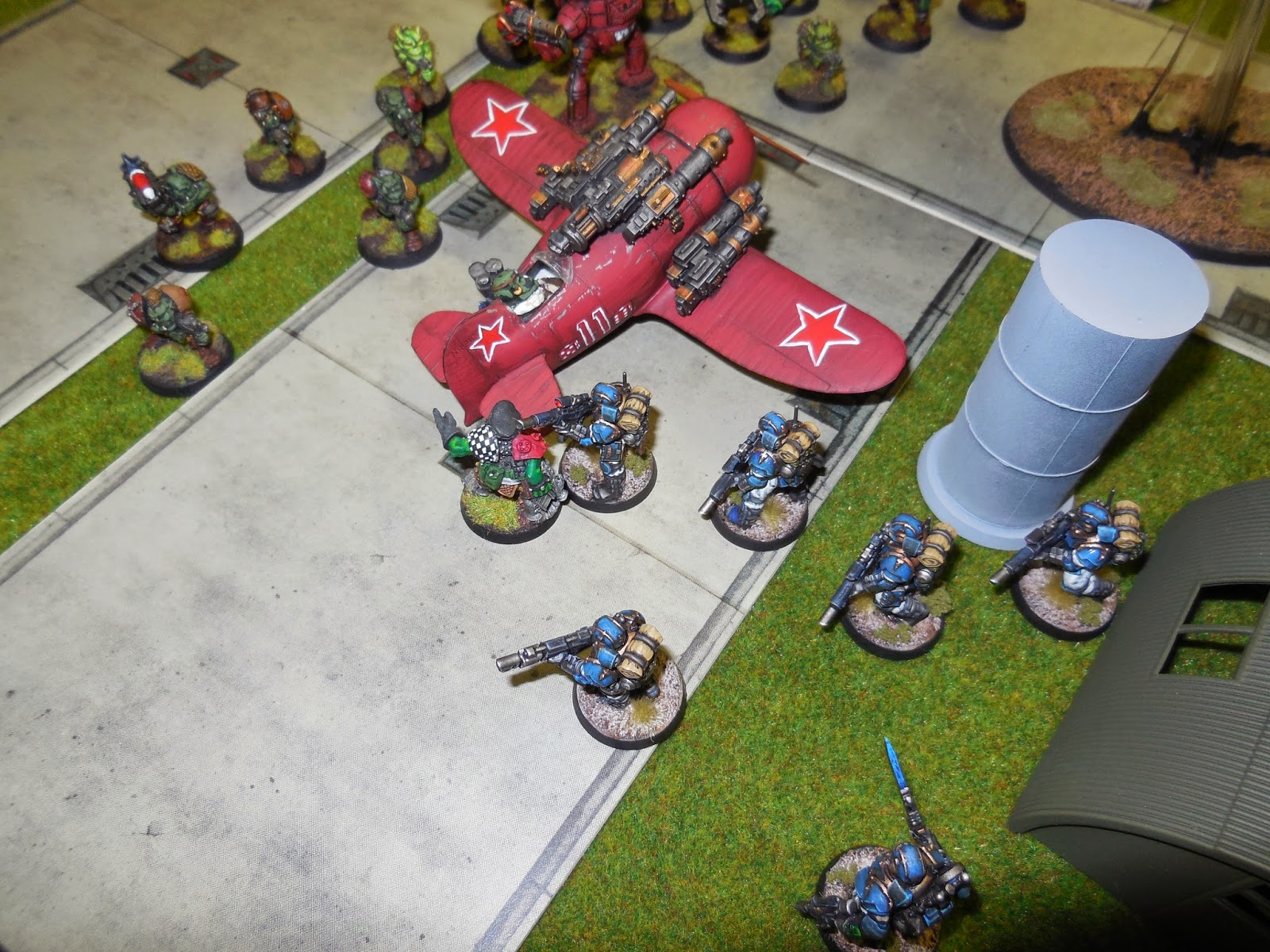 Over in the centre, though, it wasn't easy being green as the Scions reached the prize first, dragging the semi-conscious Barun out of his aircraft. The boyz squad was angling for a charge... 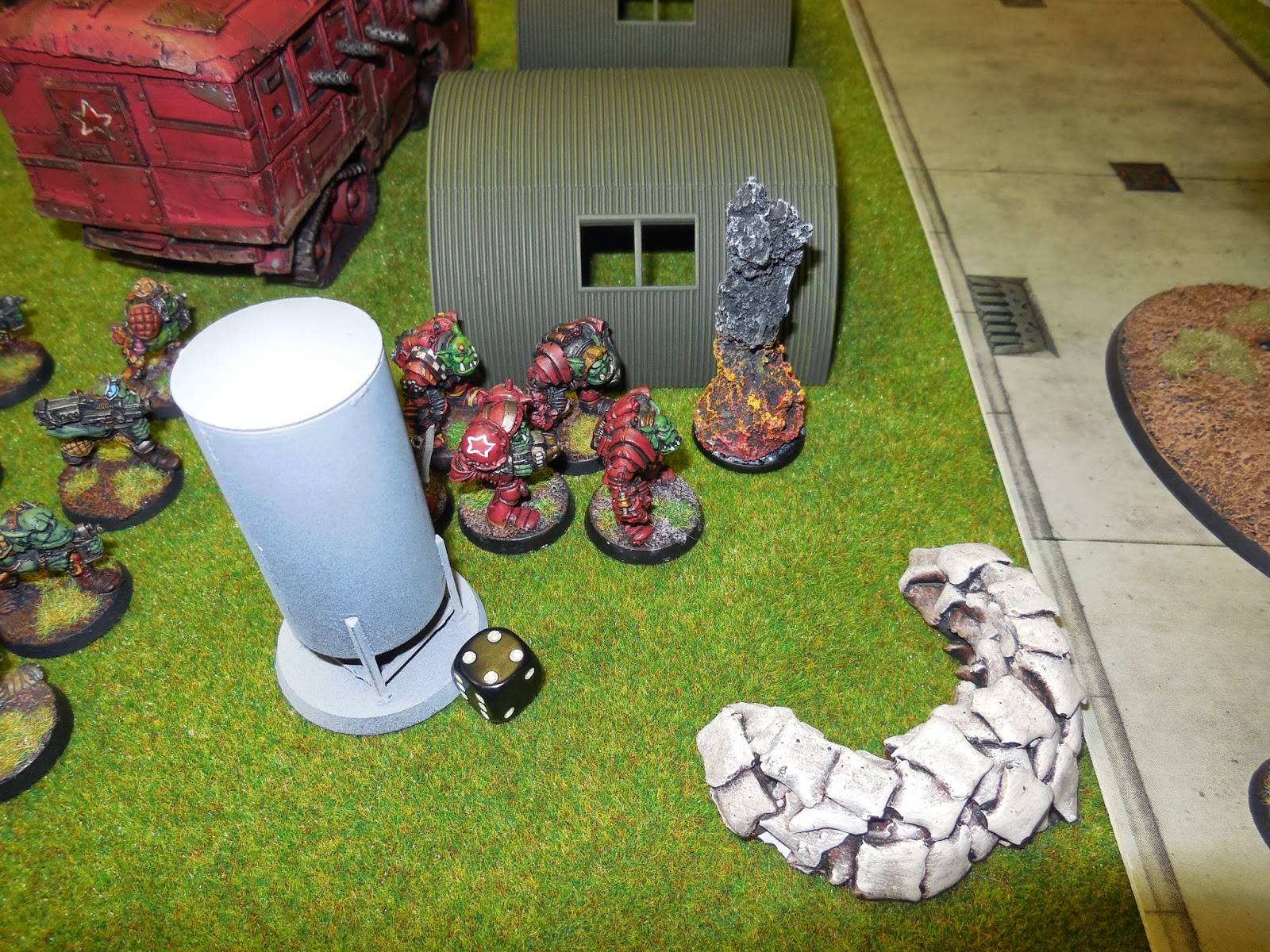 Our cunning plan was to overwhelm the Scions with a devastating combo from the Meganobz and Warboss. Imperial plasma guns put paid to that plan, however, with the boss being plasma'd... 2-1 Orks as the Imperials score 1VP for Kill the Warlord. 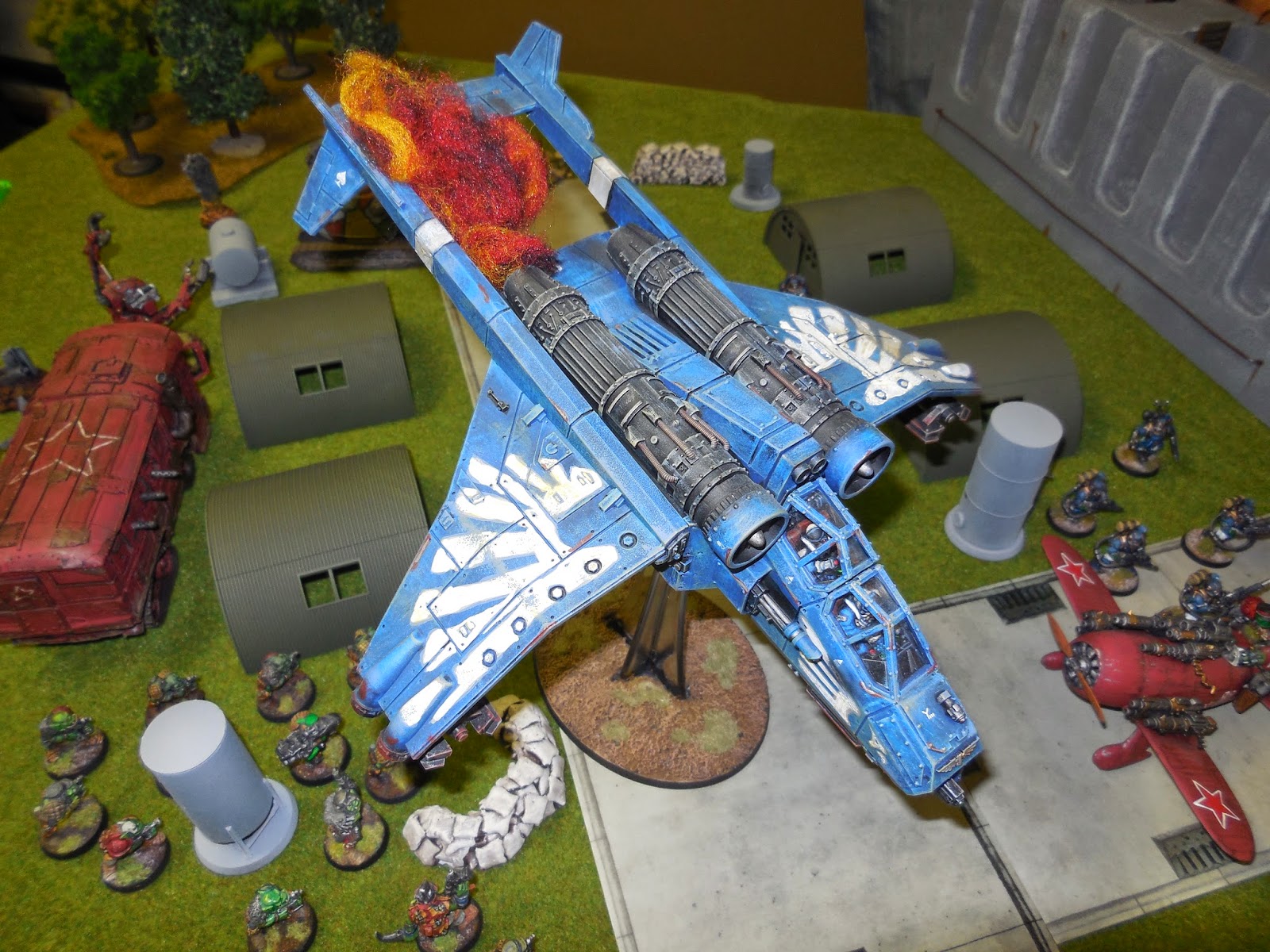 Meanwhile the Traktor Cannon and quad flak were dakka-ing away at the circling Valks. BS2 is a bit of a bitch, but we were heartened when the quad flak scored a 6 to hit and another 6 for penetration! Outstanding! But our joy turned to sorrow when we found that all we did was take off a hull point, as the quad flak didn't have the requisite AP to knock a flyer down outright. Yeah, that's what we thought too. 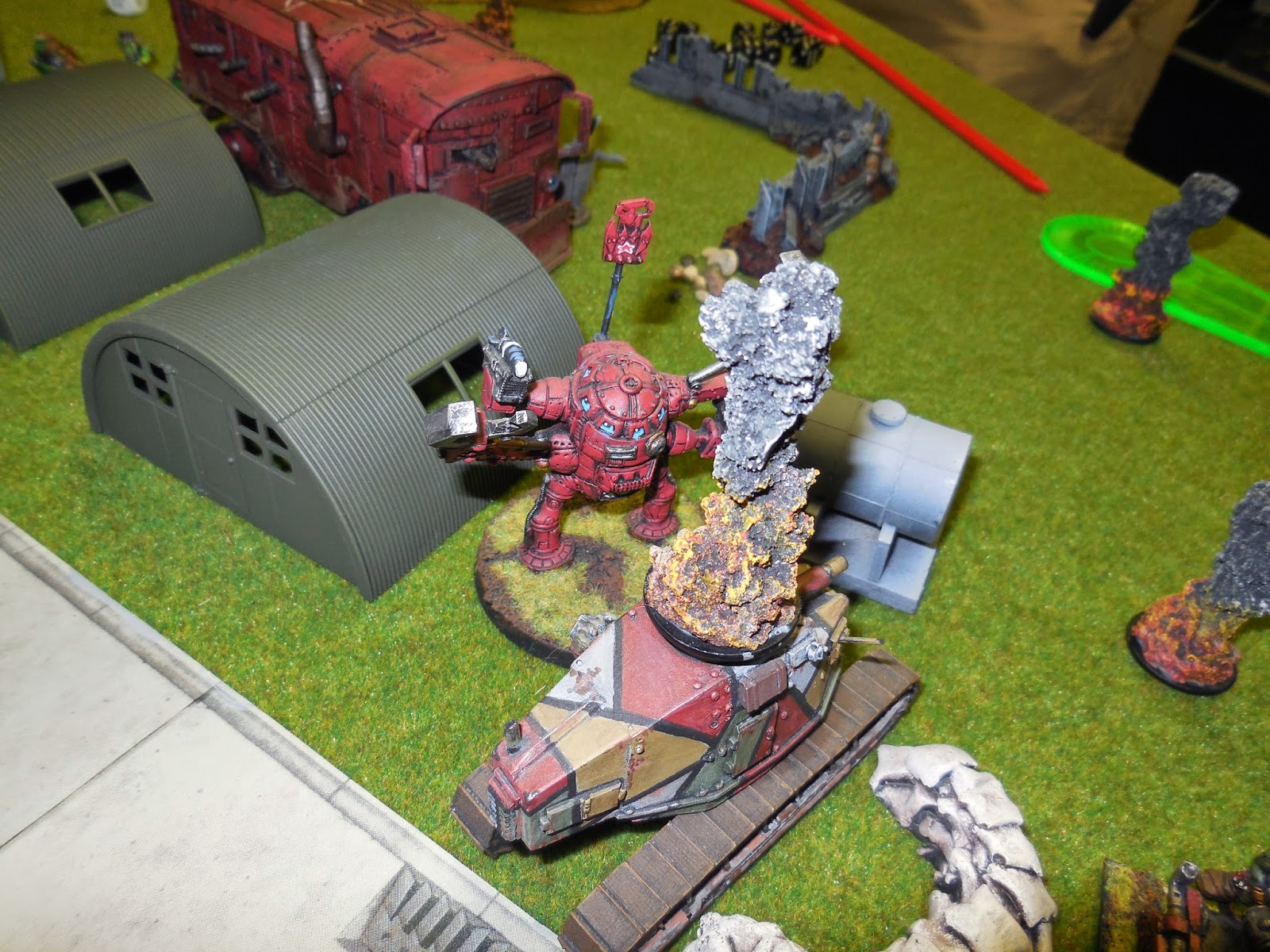 Deff Dread dealt with the Quar-mera in spectacular fashion. 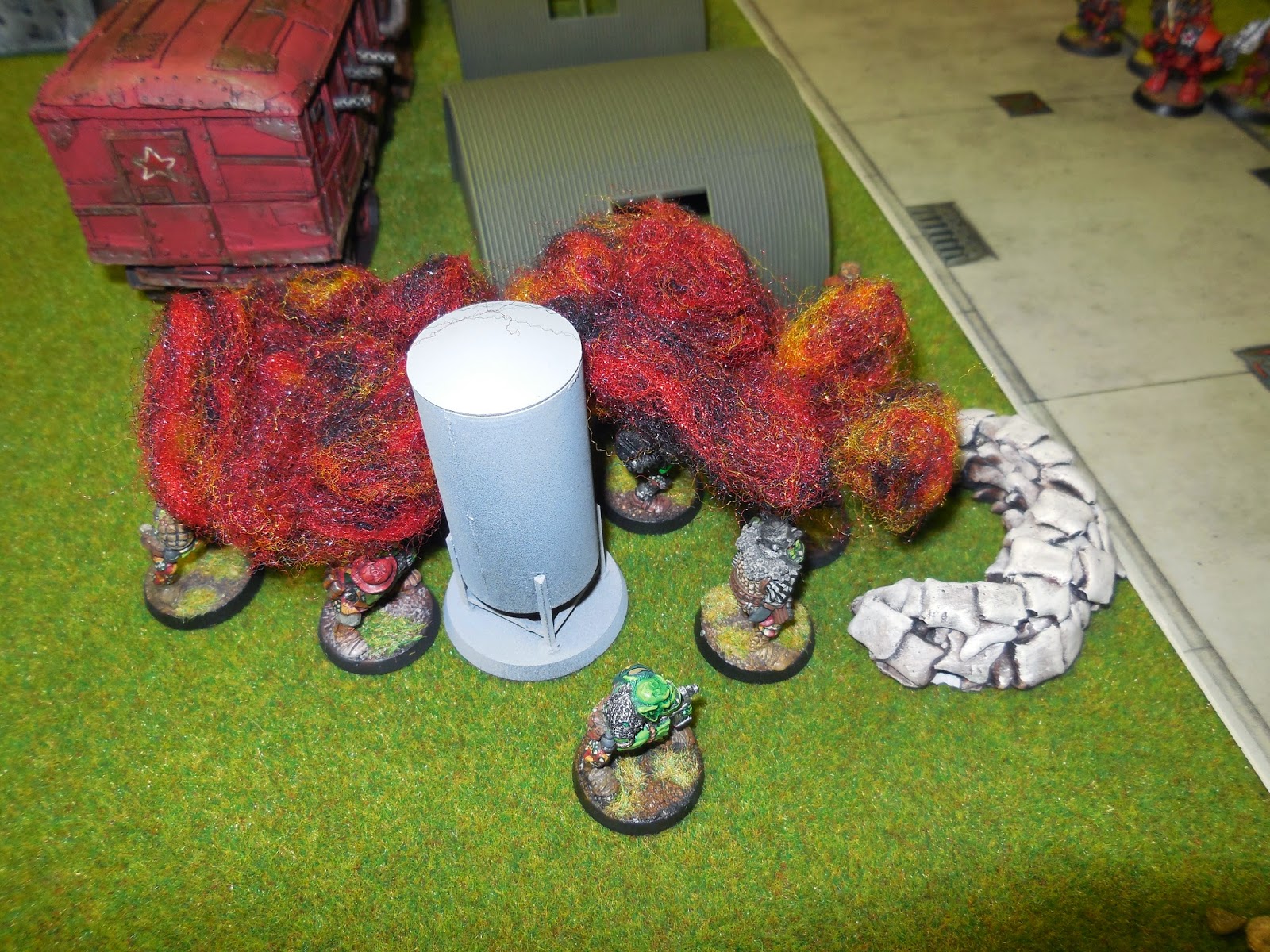 Those Valks were pesky indeed though, dropping "pie plates" that chewed through boyz squads with ease. Greg and Byron were particularly deadly with the scatter dice :-) 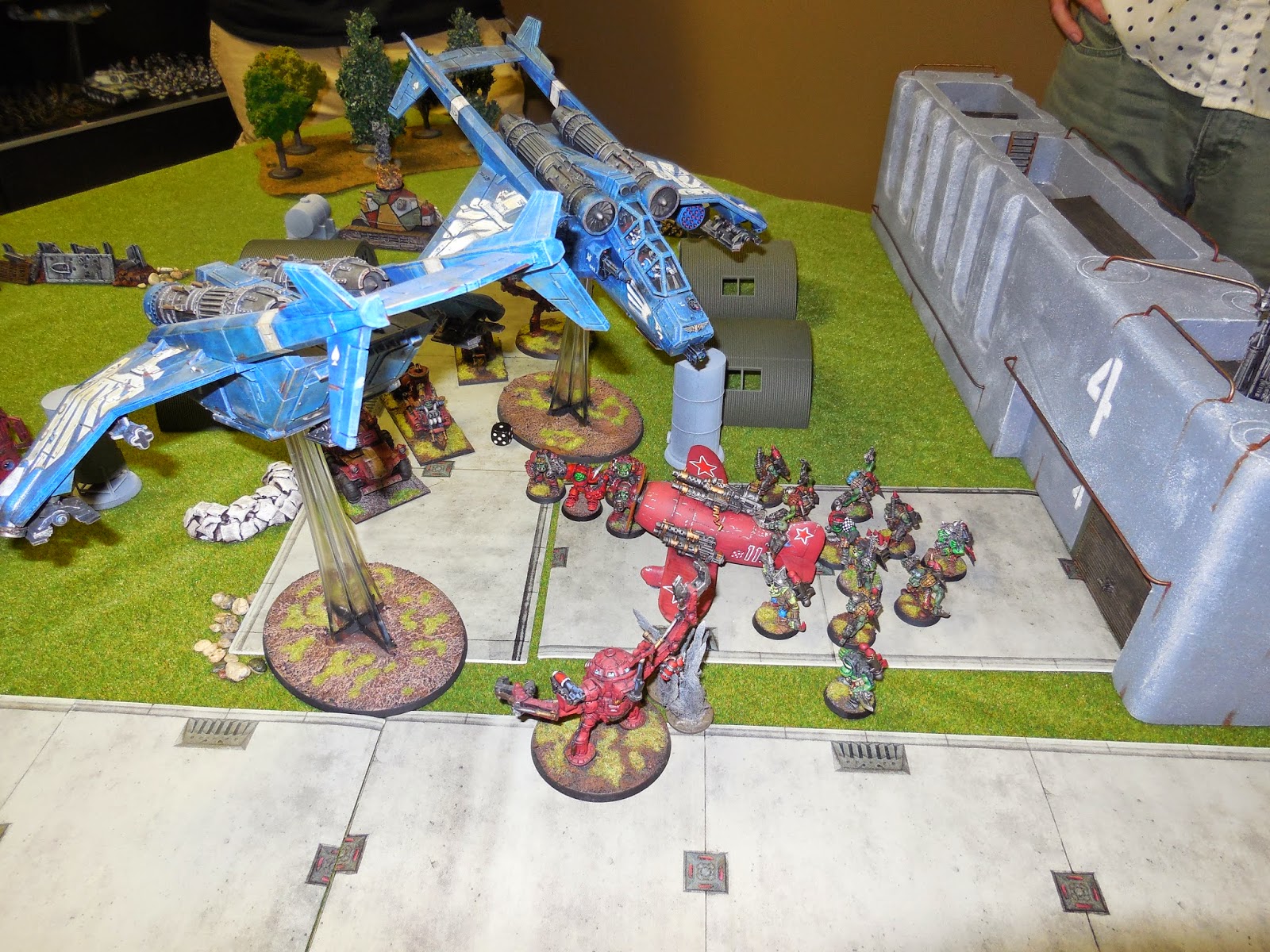 Luckily the Stormboyz were able to stick their landing (not shown) and grab da Barun from the decimated boyz squad... They in turn were wiped out almost to the last boy by Imperial fire. 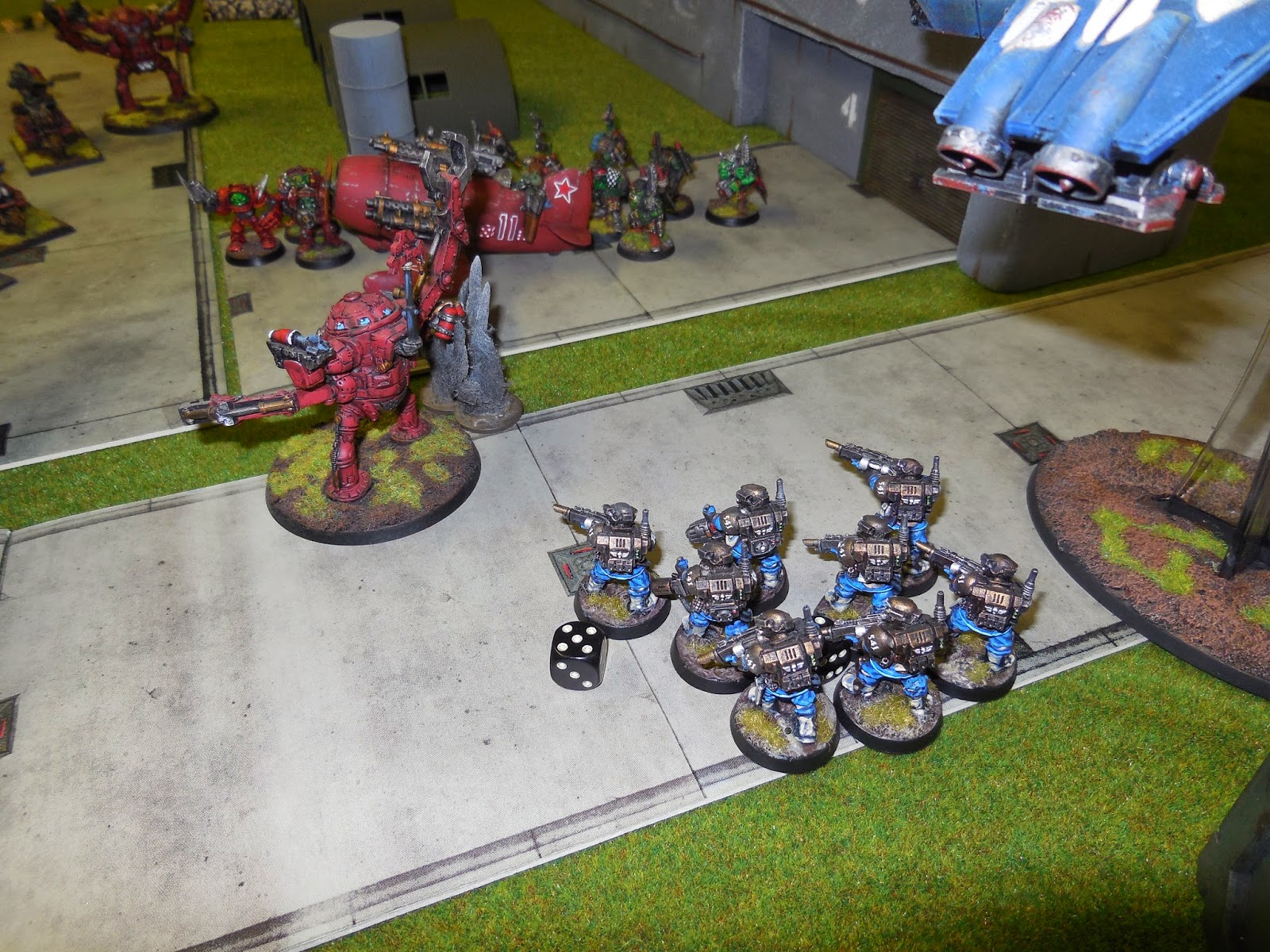 Guardsmen deploy by poop grav chute (sorry, Ork joke) and light up some boyz, but it was to be too little, too late, as the Skorchas dealt with them. S5 AP4 is a sure-fire Guard killer, especially when you don't need to use BS. 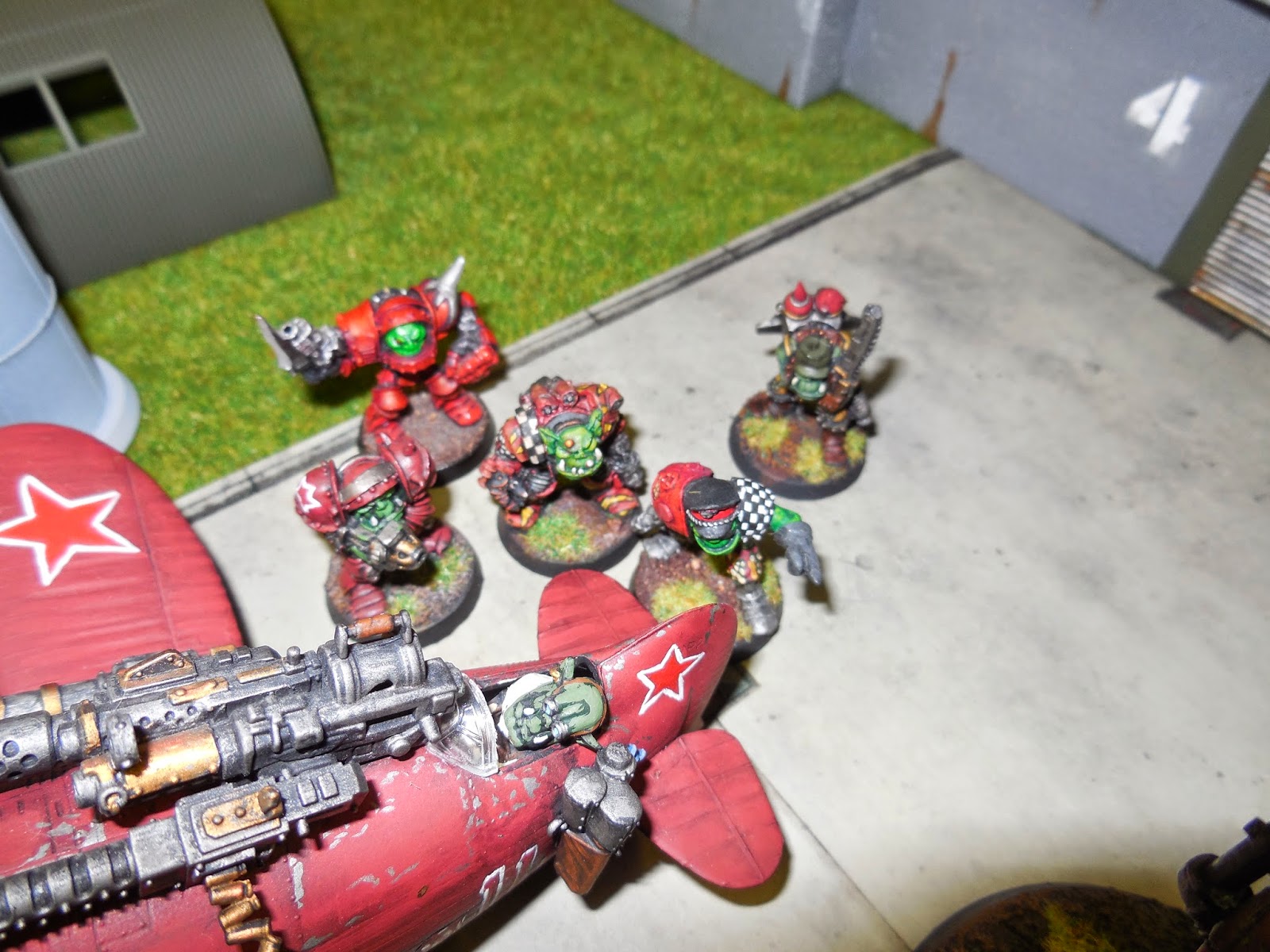 Only a couple of Ork Meganobz left to safeguard the Barun but it was enough. The Imperials were out of troops and Valks can't grab the target. 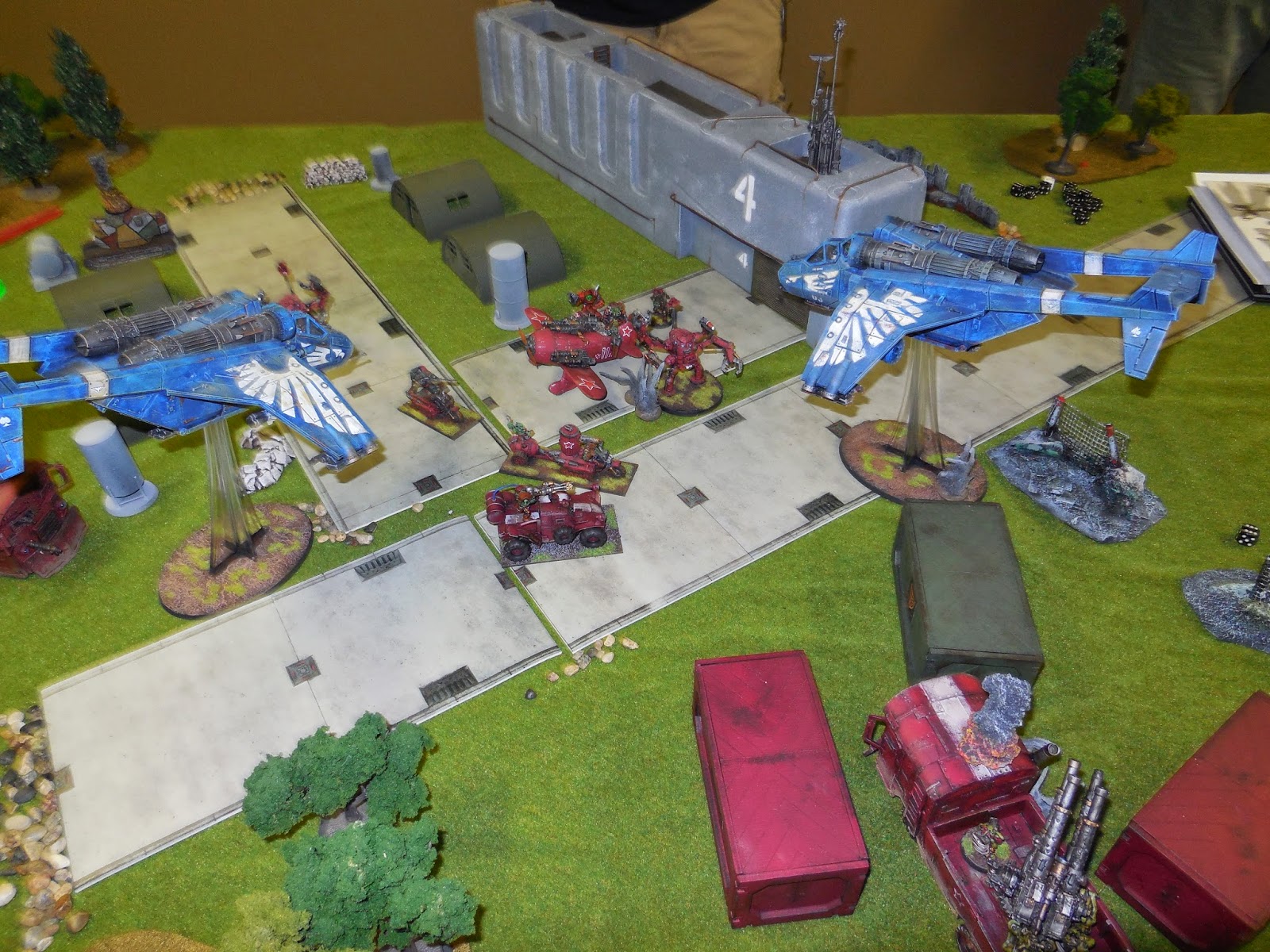 I think the lads had fun and it was great to get the quad flakka-dakka and buggies out on the table. I quite like the new 40K and I'm sure we'll play again - we're planning a big Heresy game for later in the year so stay tuned!
Posted by Dallas at 8:34 PM

The new 40K rules aside (I'll admit I'm no fan) the game cracked along at a good pace and was a load of fun (and the guys' figures looked fabulous). Also, thanks for letting me bring out my Quar as IG proxies! They managed to get in a couple kicks before getting summarily roasted by the Orks. A fate I fully expected as they were 'new' figures...

Thanks for hosting the game dude!