Another unit painted for the Analogue Hobbies Painting Challenge.  This group of 24 figures will represent the 3rd battalion, 60th Regiment, King's Royal Rifle Corps.  The models are 28mm Perry castings.

The KRRC served in General Graham's force out of Suakin, fighting at El Teb and again at Tamai. 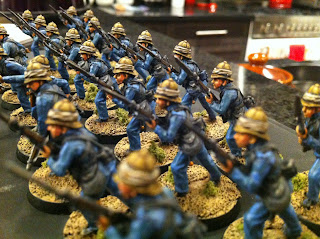 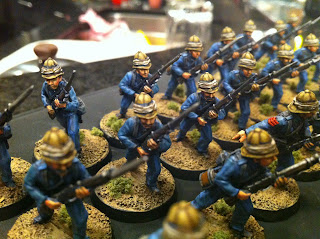 Of course the riflemen always have to be DIFFERENT somehow.  No mullets or volley guns with this group, but but their straps and bags are black leather, different from the other British units in the theatre.  Somewhere - either the Perry bros' awesome page, or maybe an Osprey - I saw a reference to a print that showed the Rifles in action wearing their more "traditional" green.  That would be cool, and I thought of painting a few like that, but in the end I stuck with the traditional khaki look. 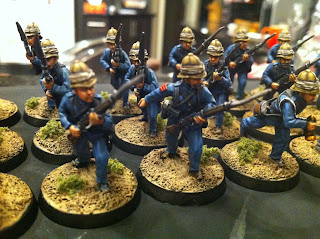 I have ordered some sabot-type bases so I can use units like this one for Black Powder games to fight as a battalion-sized unit.  Otherwise they can fight on their own in skirmish style games.  The Challenge has one day left, but I have a few more entries still left - keeping my fingers crossed to finish tenth!
Posted by Greg B at 10:00 AM

Very nice they look to, great job and ranked up look super.

These are excellently painted Greg! One of my favourite entries into the challenge!

Lovely work mate and you finished 9th as well.

Awe-inspiring paint jobs! And I would be thrilled beyond words to paint a tenth of what you've painted for this contest.