Last Thursday, Greg ran an awesome Golan Heights/Yom Kippur War game at my place. The scenario was a desperate stand by outnumbered Israelis against an overwhelming number of (as it turns out, quite hapless) Syrians. Conscript Frederick took command of the Israelis while Conscript Mike F. and I commanded the Syrian force. Greg ran the charts and Conscript Brian... "kibbitzed". 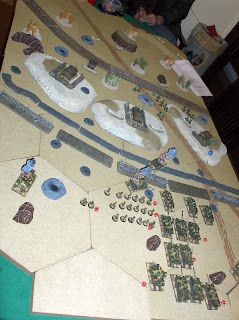 Here's the situation. The Israeli "Purple Line" is across the ridges at centre. There's a tank ditch and wire/mines across its front, with some burning Syrian tanks left over from the last assault. We've just set out the Syrians there for the photo - they enter from the near table edge. Our objective is to break through the Purple Line with all we can, and exit the table at top of photo. 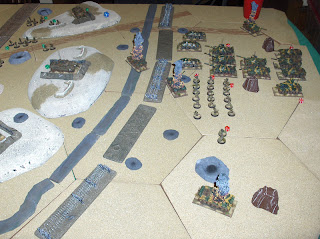 Syrian assets included three platoons of T-62s - two of three vehicles each and one with two, three BTRs with an infantry section in each, and a ZSU-23-4 AAA vehicle that would come in handy later. Oh, and three fire missions from a SAF MiG-21. 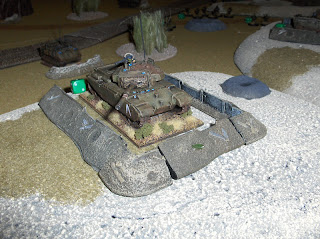 The Israelis deployed two Centurions on the Line with one coming in reserve, two M113 APCs with an infantry section in each, plus a bazooka team. Frederick deployed these mostly across the Purple Line. 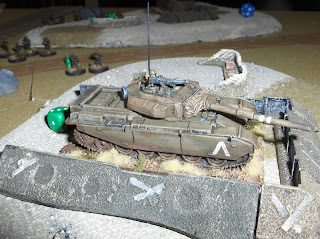 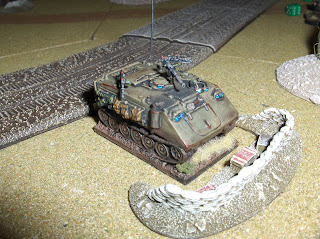 M113s were held back a bit for tactical flexibility. 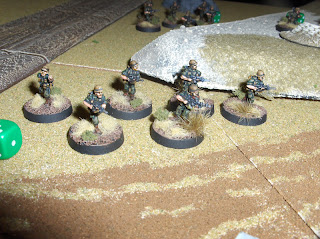 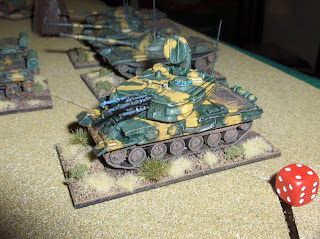 This guy would end up as "man of the match" for the Syrians. 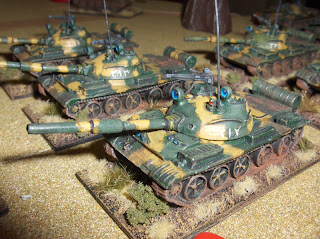 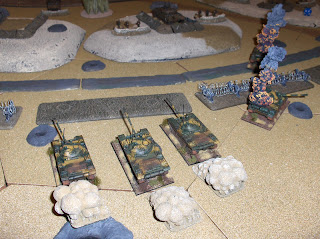 The game begins - we race a platoon of tanks up on the left flank, aiming for the gap where the Centurion hasn't yet reached its position. 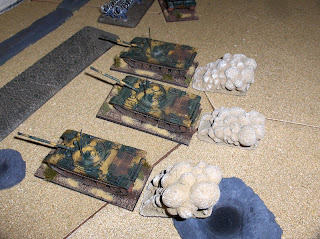 Greg had some very cool resin "dust cloud" markers we used with the vehicles. 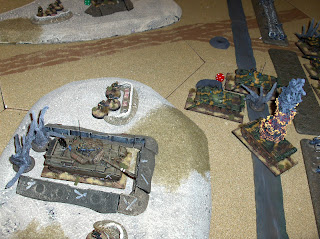 On the other side of the table, we simultaneously assaulted with the other tank platoons, followed up by the BTRs. We made it across the mines and tank ditch without too much difficulty (accumulating one pin in the process), and the platoon commander successfully raised our air support on his radio. All seemed well until... 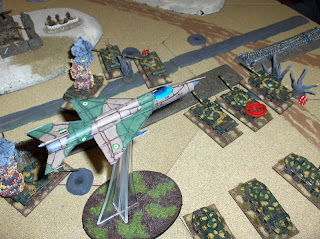 ...the air force showed up! The rules require a "Scottish check" when air assets arrive. If you roll a "1" then the pilot is confused and "blue on blue" is the result - your opponent picks the target of the airstrike and it is resolved against your own troops! Of course, that's what happened, and the MiG attacked our own tank platoon, doing three Pins and halting their advance. 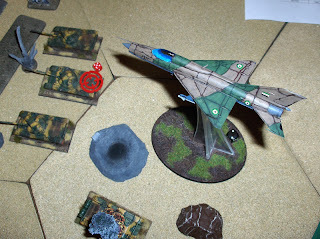 Of course, in the following turn, the Syrian commander called for air support again. Of course, another "1", and this time Frederick targeted the platoon on the left flank, which were duly suppressed with three Pins. 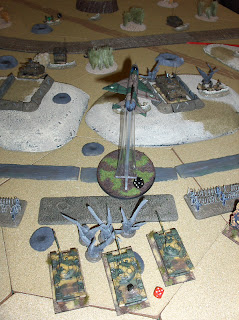 MiG streaks away from another "successful mission" while Centurion at left races up to take its hull down position. 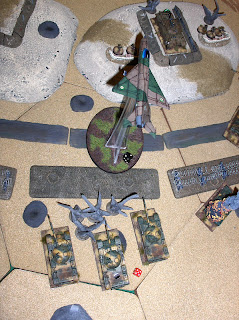 The ZSU-23-4 was ordered to open up on the MiG and did a couple of hits, which lessened the effectiveness of the attack on our tanks somewhat. 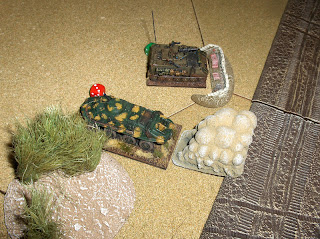 Meanwhile, a lone BTR had snuck through the carnage on the right flank and made a charge into the Israeli backfield. 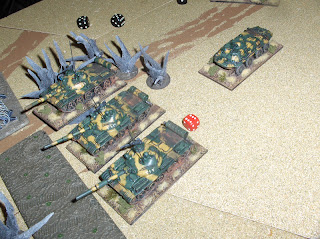 The tank platoon that was initially attacked by our own aircraft is so suppressed it cannot move, even with the commander screaming at them from his nearby BTR. 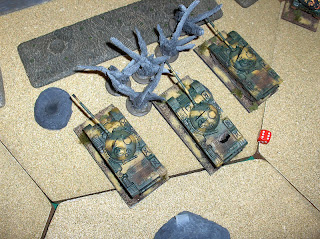 The tanks on the left are similarly swamped in Pin markers. 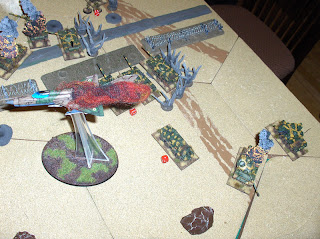 The commander called desperately for one last air support mission. Of course, this culminated in the third successive roll of "1" and the MiG swung around for one last run at his comrades in the T-62s... 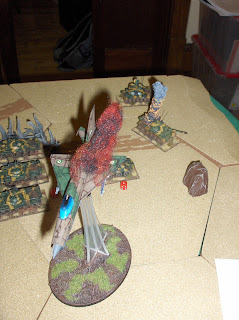 Fortunately the ZSU-23-4 crew in the background were paying attention and lit up the MiG with AAA fire, shooting it down in flames before it could attack their tanker comrades. Does this count as a "kill"? 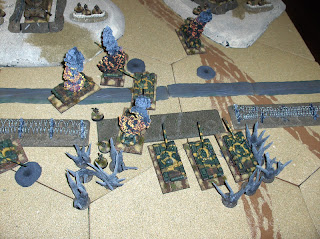 The Purple Line is intact. Two tank platoons out of action - the first destroyed or immobilized, the second loaded with so many Pins that they cannot activate. Burning BTR at top right as well. 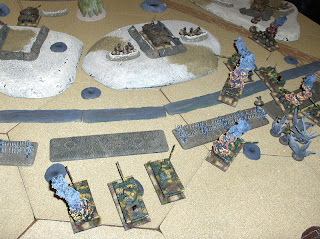 The commander's BTR was destroyed crossing the minefield and the command section bailed out - seen surrounded by Pin markers at centre right. 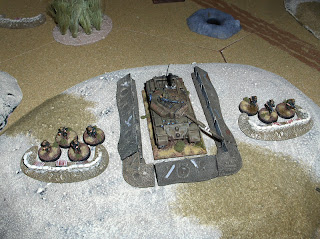 Tucked up safe and sound on the Purple Line! 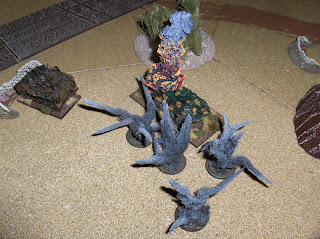 The lone BTR to make it near the objective line was destroyed by fire from an IDF bazooka crew and the M113s.

All in all a rather sad outing for the Syrians but nonetheless a fun game! We used the Bolt Action rules with a similar activation mechanic to that we used in our 15mm WW2 outing - the Syrian tanks activated as a platoon of 2 or 3 vehicles while the Israeli Centurions activated individually. This simulates the relative inexperience and lack of tactical flexibility of the Syrians and to an extent offsets their numerical advantage. However, it makes it that much worse when the Pins start to accumulate, since they affect the entire platoon's activation instead of just one vehicle's. The "own goal" airstrikes effectively halted the entire Syrian advance with 6 well-placed Pins. Since the Syrians were rated as "Inexperienced" that meant a Morale check of 5 or less on 2d6 just to activate - and that's before the other "incidental" Pins from shooting and minefield crossing were added. We were looking at having to roll snake-eyes or perhaps a "3" just to take an action. perhaps there is room there to add a mechanic allowing the owning player to exchange a vehicle from the platoon as a casualty in order to remove some Pins. Or maybe the commander should just be sure to roll better on the air support checks???

thanks to Greg for bringing over his gorgeous toys and to the guys for playing!
Posted by Dallas at 11:44 AM

...I think Mossad managed to sneak an Israeli pilot into that MIG! :)

no not in the MIG, but certainly in the A_G controller radio booth!

That's quite the string of totally BAD LUCK for using air power ...

Thanks to the guys for playing a fun game (at least to watch)!

I felt terrible for the Syrian side, especially that Dallas had done all the work on the Syrian plane!

I have noodled a few possible solutions to the issues of the pin markers on the tanks that we can try next time, something like:

- Tank units with crumps can try an un-modified order check and if successful, leave one tank behind for that turn as pinned while the others undertake an action un-encumbered.

- Hand out the pins on a per-tank basis, and the modifier is the average...so a three-tank platoon with three crumps would have a minus 1, not minus three.

Probably some other things we can try too...

Overall I am still really pleased with Bolt Action and how it allows a lot of stuff to roll over/around the table. If those pins had landed on the IDF, it would have been a different game for sure...

Fantastic looking game with some quality minis - great stuff all round!

Cool report guys, and an interesting insight into using Bolt Action for this period.