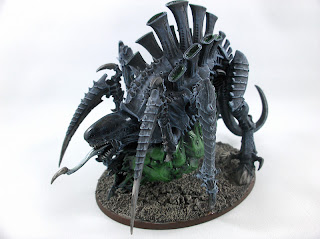 Last weekend at the Comic and Toy Show I impulse-bought the new Tyranid Tyrannofex/Tervigon kit as a reinforcement for Hive Fleet Nostromo. The new kit looked really cool and although I'd been jonesing for a Tervigon conversion kit from Chapterhouse for some time, that would've involved buying a Carnifex and then adding $25 plus shipping for the Chapterhouse kit. Although the plastic Tervigon was not cheap, it's a one-stop solution with typical GW plastic kit quality and copious left over bits for the bits god. 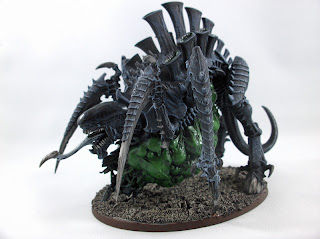 The Tervigon's assembly instructions were straightforward and the kit went up in a couple hours, if that. One thing I did do, following a top tip from this month's White Dwarf, was to leave off the legs from initial assembly and priming - easier to reach the greasy bits underneath when painting later. 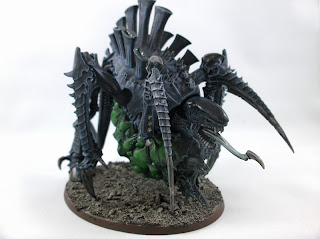 The only conversion to speak of was to grind the spikes off her head and greenstuff in the smoother Giger-Alien head dome to match the rest of the models in the Hive Fleet. 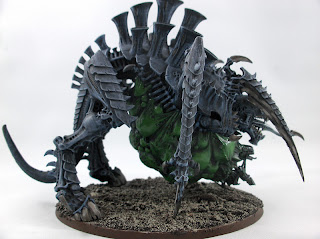 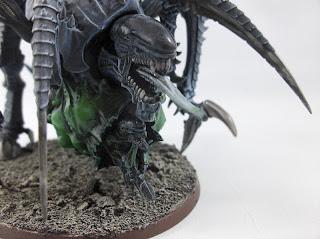 I painted the model last night in the typical Nostromo scheme of Shadow Grey/Space Wolves Grey, Boltgun Metal/Mithril Silver, and Dark Angels Green/Snot Green, with Badab Black washes and 'Ardcoat gloss. I think it turned out fine and will be a good addition to the Hive Fleet - there are 18 more Termagants waiting on the painting table and these will certainly be needed the next time Nostromo rolls out large.
Posted by Dallas at 6:42 PM

Looks fanastic. A wonderful addition to HF Nostromo. Love that Nid army by the way.

Love your rendition of one of the few Tyranid models I actually like. Fits in nicely with the rest of your force.

I love the look of this thing; the bug emerging from its womb add that extra squick factor.