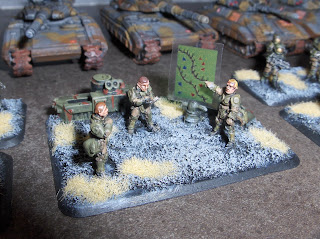 On Monday I got a couple parcels in the mail... one was a small padded envelope from Khurasan containing (among other things) a Federal Army Command Team with Holomap.  I reckoned these would mix reasonably well with the Earth Force Marines.  I based the lot on a large Flames of War base and added some random GW bits from the bits box for interest, to represent some equipment or stowage that the command team would need, maybe a generator to power the holomap and espresso maker?

Anyway, I think they turned out OK and make a nice addition to the Earth Force Marines group.  Here's the force in its entirety (for now) - I added another Merka 5 and three APCs courtesy of Conscript Greg (thanks man!)

I really like this force, what ruleset are you planning on using?

Thanks - planning on using "Future War Commander" to start with, anyway. I still have to cost out the army.

Wow, great looking force, and it looks as if it would be useful for a number of game systems. What made you go multi-base over individually based?

Thanks Las - pretty much went multi-based because of the FWC rules system we'll use for games. I've always kind of had a notion that 28mm figures = single based and smaller ones are multi-base. The nice uniform FoW bases make that easy too...

Oh great - now I need to use new command figures.

No need... I'm sure yours will look quite different in their own colour scheme. In any case, the holomap projector probably came from the same guys that supplied the spotlights to every single faction in FutureKrieg...

Looks great! I am toying with the idea of getting the German Stormtroopers from Eureka:
http://eurekamin.com.au/index.php?cPath=87_102_107

Now I just need to find some suitable vehicles. I love 15mm...

Very nice work. Like the group basing and the vehicles have a great paint job.