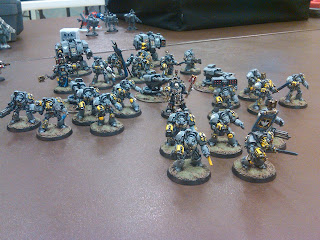 Last weekend I attended the Flatlands Fantasy event in Regina, Sasksatchewan, and played in the 40k tournament! What was I thinking? Well, let's be clear - the real reason was to visit with Curt and check out their awesome new place in Regina. Curt was a great sport, and accompanied me in my Custer-like entry to the 40k event.

The event itself contained a rich selection of diverse stereotypes you expect to see at this sort of event - from the the unpainted armies, to the "socially awkward" power gamers, to people who pay other people to paint the figures, and are shocked to learn that you bother to take the time to paint your own.

The tournament was a 1750 point event, and you were encouraged to make your army as cheesy as possible. I brought out my Deathwing army (pictured above) and was such a moron that I failed to realize that the Librarian, Chaplain and Captain all count as HQ choices, so in the end I went in at only about 1600 points.

The games were a wash - I was defeated in detail twice (thanks to 40k's absolutely moronic "reserve" rules, which should just be called what they are, "random f*****g arrival"), and won a "moral" victory againt a Tyranid force in a game where I ignored all the fluff (i.e. teleporting on to the table) and started everyone in one corner, shooting the other guys to little bits!

I would have to say the last game was the worst, wiped out by a Tau army with about three painted models, and most not even primed (you can see it starting to set up in the background of the photo above).

But on the whole, I enjoyed it. I won "Best Painted", which was very nice, but considering there were armies without painted figures, not exactly much for bragging! Not close to the kind of tournament that WarCon used to run, but still fun. The organizer of the tournament did a heroic job keeping the train moving, and while he knew the rules well, knew 40k for what it was, and kept it all in perspective.

Was also fabulous to see Curt and Sarah once again. I look forward to another trip down the highway to see them again later this year!
Posted by Greg B at 11:20 AM

Sorry I couldn't meet you in Regina this past week-end. Your army looks splendid. Hope to have a game with you sometime in the future.

Moral victory, indeed. I love your army. I'm glad the event was at least well-run.

I'm still surprised at the existence of unpainted armies at tournaments. I've been reading some online stuff by "competitive" 40K gamers (that is, those who believe tournaments should be scored only by actual game play, not soft scores like painting, composition, etc.). Even they pretty much have a "painted figures only" mindset.

Mechani-kon (the successor to Warcon) is being held in September this year. Also, Astronomi-con Winnipeg will be held at the end of July.