After sinking the Graf Spee, Dan was eager for more naval action. As Captain Dan Strachan he was ready to face Rear-Admiral Sylvain Dumanoir in the battle of Cape Ortegal. Four French ships that escaped the disaster at Trafalgar are encountering a small British fleet of four 3rd rate ships-of-the-line and four frigates. This scenario is taken straight from the Trafalgar rulebook by Warhammer Historical. We played the rules without any changes, except that I redesigned the display sheet in a way that is more intuitive to me and that can also fit 4 ships on a 8 x 11 sheet instead of only 2 with the official design. 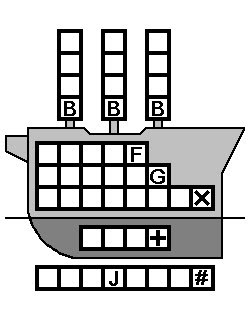 This is my reconfiguration for a 3rd rate ship-of-the-line. Boxes are marked off from left to right, or from top to bottom on the masts, and the letters represent the effect of sustained damage. B = loose 3 cm. F = loose caronade. G = loose heavy gun. X = crippled. + = sunk. J = -1 command check. # = decrewed.

This is the initial deployment. The 4 French ships are on the left side, abreast. The 4 British frigates are in column on the top right of the board. Coming toward the camera is a column of 3 British ships-of-the-line. Waiting to enter the board is the Namur, supposedly delayed, but Captain Dan rolled her on the board as early as turn 2.
The scenario was to be played on a 4'x6' board, but the battle took place on the upper half, and the important events took place on the upper quarter. In the Trafalgar rules, ships that "hold the weather gage" (i.e. closer to where the wind comes from) have a decisive tactical advantage because they move after those that are further away from the wind. As you can see, Captain Dan and I deployed our ships consequently. Next time I host a game with the Trafalgar system, a house rule will prevent players from deploying closer than 60cm from the edge where the wind comes from, otherwise we might end up playing "chicken" on the first 5cm strip of the board.
The objective of the scenario was for the British to capture (i.e. cripple, sink, decrew or board) the French Flagship before turn 15. The Formidable was my flagship, and it was adorned with a big blue banner for recognition.
My initial plan was to use the Mont-Blanc and the Scipion to protect both the front and rear of the Formidable and to try to hold the weather gage. My fourth ship, the Duguay-Trouin, was to be used as a bait to distract a few British ships away from the Formidable and/or to harass the British squadron from behind. I also had a slight advantage in command since there was a rear-admiral aboard my flagship.

This is the third turn of the game. The French vessels are highlighted in blue circles. You can see my lonely Duguay-Trouin at the bottom right. Not even for a second did Captain Dan lost sight of his objective. He paid absolutely no attention to the juicy bait. The British frigates circled behind my main squadron and the 4 ships-of-the-line turned toward the Formidable. I thought I could quickly get rid of the frigates, but they are much tougher than they look. And with 2 heavy cannons, each of these small one-decker carries the same long range firepower as any of my 3rd rate vessels. The pesky frigates rarely came close enough to have a taste of my caronades and my batteries of light cannons.

This exceptional picture taken at sea level shows the hand of Aeolus, God of Winds. This explains how the wind pushes sail ships. 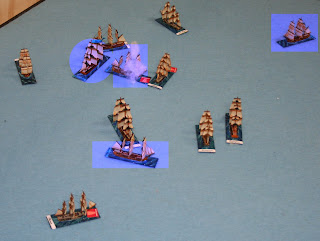 This is the moment when the Formidable struck colors after being crippled. The Formidable is highlighted in a circle. My other ships are in squares. Note that the Scipion is on fire. Captain Dan consciously concentrated his fire on my flagship. My other vessels were still capable of fighting, and the British vessels all survived with various degree of damage. It was a very pleasant and exciting game. This was my third attempt at mastering the fine art of sailship combat and I will certainly prepare more scenarios in the future.
1 bottle of wine, a few cans of Pepsi, 1 bag of nachos and 1 jar of salted peanuts were absorbed during the game.
Sylvain
Posted by Sylvain at 10:03 PM

How do you find the Trafalgar rules? Are they fairly easy/quick to play? Do they provide a good simulation of age of sail combat?

I bought the Trafalgar rulebook last year in Winnipeg. I've never played sail ships before, so I can't compare with similar rules. It follows the GW pattern: move, fire, save. The rules are about 20 pages. They are quick and easy to learn.The rest of the book is about navies and scenarios.

I will be in Winnipeg for the 3 first weeks of July. I could bring a few ships and you could have a try. I'll just need some help finding a babysitter as I will have my son with me.

A naval game would be awesome!

In return, maybe you'd be interested in playing an air combat game. I'm working on an "Allied Invasion of Sicily" scenario for CY6!