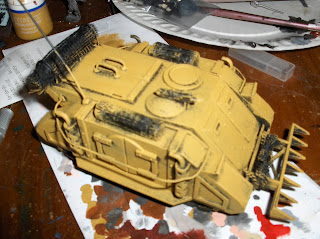 I very rarely document any project in steps. In fact I was going to do this with the RT Space Marines I painted last week, but I took one picture of the basecoated figures and promptly forgot to take any others until they were pretty much all done. Anyway, since I was painting the Rhino for the RT guys on Sunday night I thought I'd take "in progress" pics just for fun.

Immediately above, we have the basecoated vehicle. I just painted the whole thing with GW Iyanden Darksun foundation paint and a large brush. I didn't worry overly much about getting paint on parts of the model that aren't supposed to be yellow - I'll clean that up later. 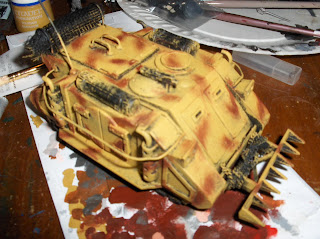 Next step was to paint the camo on. I decided to use a WWII German pattern (surprise!) and found a suitable one in "Panzer Colours" by Bruce Culver. The "model" was a StuG IV on the eastern front, late '44. I lightly brushed/stippled on GW Dark Flesh. The historical equivalent would be "dunkelgelb/rotbrun" I'd say. 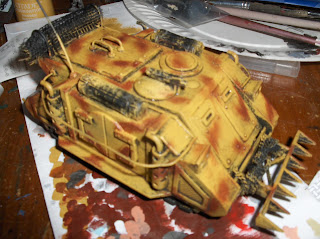 Next, a wash of GW Devlan Mud (the all-purpose wash!) to darken the yellow, even out the camo, and add a bit of shading. 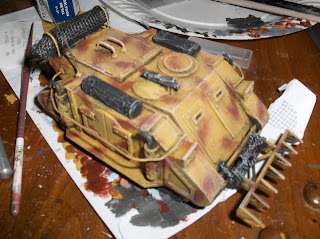 Above, I've tidied up the stowage and painted the metal bits with GW Boltgun Metal, followed by a light drybrush of Deneb Stone. 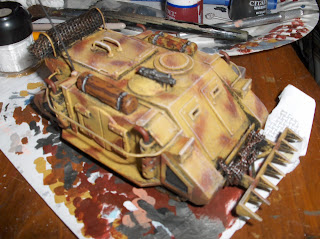 Good progress in this photo - I've painted the stowage (nearside in Scorched Brown/Bestial Brown, far side in a Darksun/Dark Flesh/black camo to match the Space Marine armour, with Codex Grey straps), rusted out some of the metal with a Chestnut Ink wash, painted the exhausts straight Dark Flesh, and washed the bolter with Badab Black. 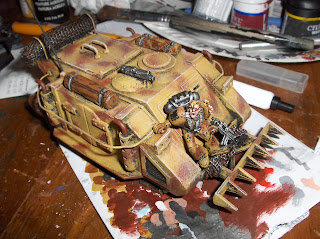 Finished vehicle with rider - I've done my typical weathering with a Scorched Brown drybrush up from the bottom in the places where mud and dirt would accumulate. I follow this with a drybrush of Bestial Brown. Now into the decal folder... 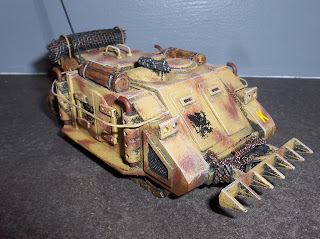 Beauty shots of the finished model with decals. Griffons from Ginfritter, letters from ??, numeral "5" from the SKIF Russian tank kit I built for Futurkom. 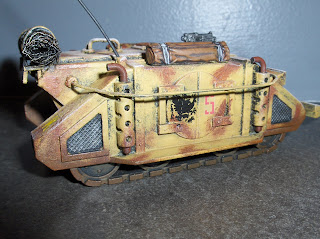 The "5" denotes the fifth company (several of the Space Marines have a matching number on their armour), "K" for the platoon within the company. 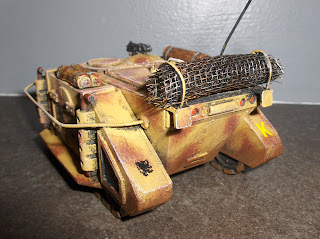 I added a fascine cut from a huge roll of wire mesh I bought at Home Depot. The retaining loops, side rails and antenna are florist's wire from Michaels. I like the look of the old Rhino with the side rails, it's very reminiscent of the RT era.

So that's how you paint a Rhino in an evening!
Posted by Dallas at 11:41 PM

Very nice! Are we killing orks on Thursday?