The latest off the Dusty workbench is a trio of figures from the Games Workshop Lord of the Rings range representing Boromir's brother, Faramir, both mounted and on foot, and a mounted standard bearer. 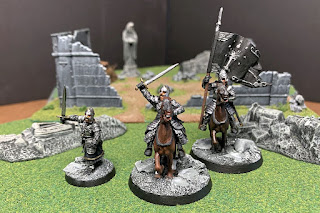 Painting the figures followed a similar technique used with the Company of Gondor project I completed last week, The figures were initially primed with matt black, The plate armour and chain mail was first painted gunmetal, followed by drybrushing on silver. Faces were painted with Vallejo medium flesh followed by a reddish-brown wash, as I did with my Warriors of Minas Tirith figures. The detail on the bases continued my 'ruins of Osgiliath' theme that I am using on all my Gondorian forces.

The only  thing that made this one different from the earlier project was painting the horses. I haven't done many horses in 28mm scale, but did a lot in 15mm years ago. I never bothered to do much shading on them, just a basic colour of some shade of grey or brown, the occasional sock or stocking, and then the saddle and bridle. At one point, somebody asked me if I didn't like painting horses, so I guess my minimalist approach sucked. It was time to do a little online research to try and up my game. The final technique I used was a blend of ideas from a number of different YouTube videos and blog posts that I found. I didn't copy any one style exactly, but borrowed different bits here and there, plus my own spin until I got something I liked. 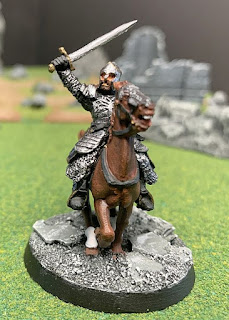 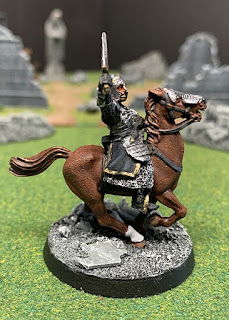 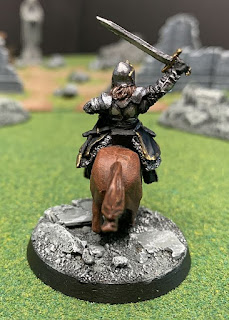 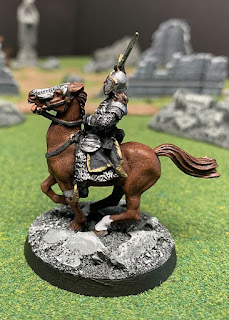 Mounted Faramir - I decided to paint this horse as a chestnut. The horse was painted in a reddish brown, then drybrushed on a lighter shade to pick out the musculature. Then I applied a medium brown wash to the entire horse, and then did a bit more drybrushing with the lighter shade on the mane and tail. I gave the horse white socks on both hind legs. 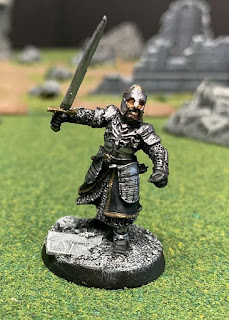 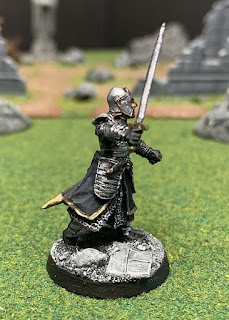 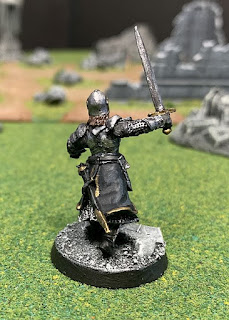 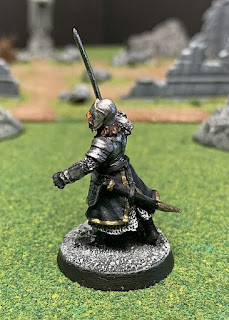 Dismounted Faramir - This was painted much as my earlier Elendil and Isildur figures, but with a bluish-grey colour scheme. The pictures available online from Games Workshop of a painted Faramir showed kind of a 'double helix' pattern along the edge of his surcoat, but I found my hand just isn't steady enough anymore. I compromised with a simple band of gold trim. 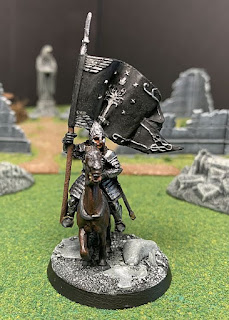 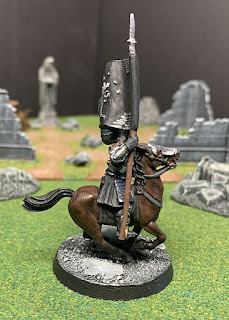 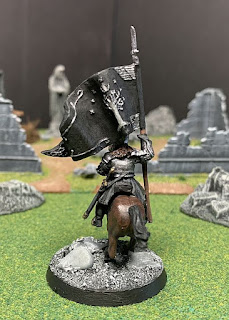 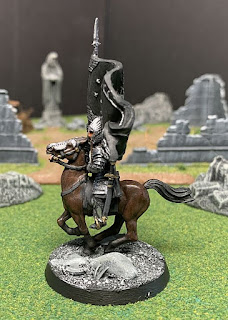 Mounted standard bearer - For this horse I went with a colour scheme appropriate for a bay. A dark brown base coat was applied followed by drybrushing a medium brown to pick up the musculature. Then a dark brown wash was applied to the horse. The mane and tail were painted black and then drybrushed with a medium grey. A black wash was then applied to the mane, tail, and lower legs.

I am pretty happy with the final look of both horses. More mounted figures are waiting in the wings to experiment with duns, blacks, and greys

Classic figures that I regret not purchasing myself back when I had the chance!