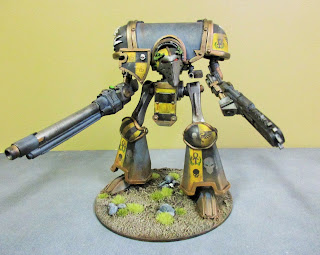 Some months back, a local gamer mentioned in a Facebook group that he had a garage kit Knight Titan for sale - not an Armorcast Reaver, but a model that some Italian Spaniard had sculpted and produced in a limited run. This kind of thing is right up my street so a deal was quickly made. 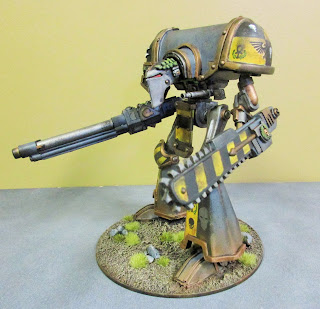 It turns out the kit was the Iron Warrior from Resinlab Models. Produced in a limited run of 150 kits (60 of the "original" IW followed up by 90 "IW MkIIs"), the model springs from the talented sculpting hand of Enrique, principal of Resinlab Models. 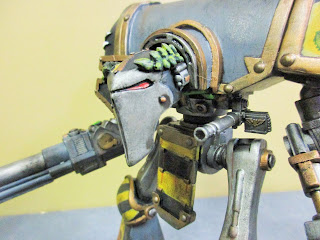 I built up the kit with a few conversions, including the GW stubber added here. I also drilled and added a magnet on top of the carapace to mount a missile rack, not shown. I've built one from the GW Imperial Knight to use. 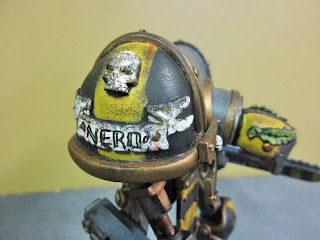 The model represents the Knight "Nero" of House Caesarean, an Imperial Knight house associated with Legio Krytos of the Collegia Titanica. According to lore, both Krytos and Caesarean engines supported the Iron Warriors Space Marine Legion in the battle of Tallarn in the Horus Heresy. 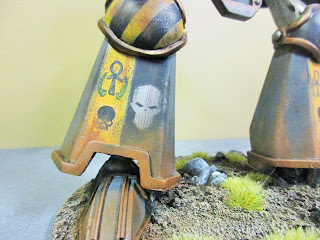 There aren't any 28mm scale Caesarean decals available yet so the tactical markings were painted by hand. I used some IW decals from the Forge World decal sheet. 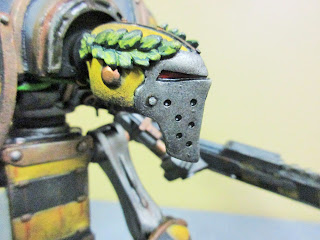 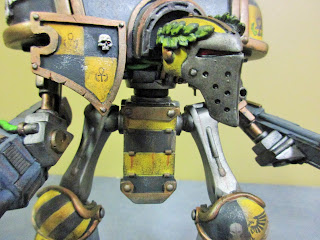 House Caesarean's colours are yellow and black of course, so I painted the Knight in much the same palette as my IV Legion Iron Warriors Space Marines. 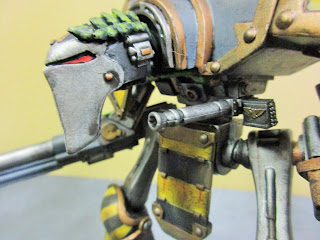 I really like the helmet of the Knight - apparently the Mk I model was sculpted without the laurel wreath. 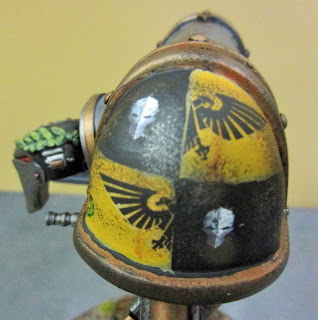 Decals from the IW decal sheet and Imperial Knight sheet were used on the paldron. 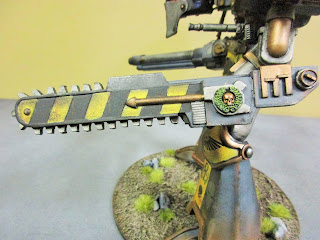 Wouldn't be a Knight without a big f*ck-off chain weapon, would it?? 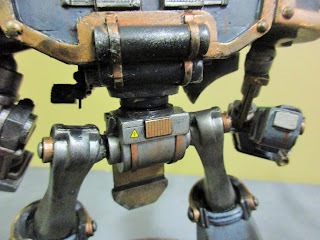 Knight world origin marking on rear of the chassis was poached from the Imperial Knight sheet as well. 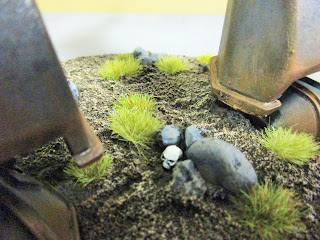 Bitty li'l skull in the groundwork. 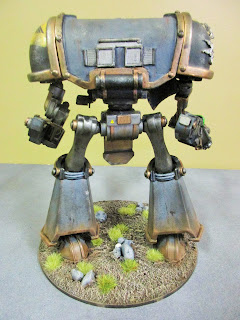 I assembled the model with a central pin, so the torso can rotate, or be removed altogether for transport or storage. 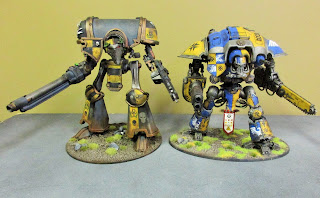 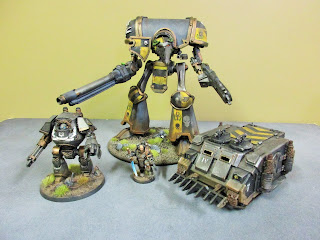 Size comparison with some other Iron Warriors models it's likely to be supporting in battle: Contemptor Dreadnought, Lochagos/Praetor, Deimos Rhino.

I enjoyed building and painting this model - it's cool to be able to work on something a bit different and rare. I'm sure it'll get blown up quickly in the first game in which it's deployed, but it'll be cool to get it out on table. And needless to say, it's a good feeling to complete a project that's been in the works for some time.
Posted by Dallas at 7:12 PM

What an awesome find. Very cool to see home brewed stuff like this done. You've done a great job with the paint job....I'm sure it will attract a lot of notice (and perhaps firepower) on the table.

That is a stunning piece of work!

Brilliant stuff Dallas - great work, such an interesting find! Can't wait to see it in action on the table!

Amazing find! Cool model! And your painting had made it look awesome. Do you know what year these were made?? I’m just interested!

I’ve just start my own Horus Heresy Iron Warriors Force Over on my blog so I’ll definitely be using yours as an inspiration!

Awesome work Dude - A little slice of 40K miniature history here. Look forward to seeing it close up in a future visit.

Great find! I really like the old school look and finish of this piece. I look forward o seeing it on the game table.

Thanks again guys! @LegioCustodes - the Resinlab Models blog I linked seemed to indicate that the "second wave" of models was produced in 2014, so the first "MkIs" must have come out sometime before that.

Enrique Millán on the phone... from Spain,

Creator of the models Ironm Warrior

Excellent paint job and an honor to see that people are still interested in these kits.

Thanks Enrique! I really love the model - please be sure to let us know if you make any more of these cool old-school Knights!