I finally got some more Imperial Fist reinforcements completed. These have mostly been done for a few weeks, but Ive been putting off basing for a while in favor of a new terrain project that I will share when it's a little further along. My army has lacked some punch on the table, but I believe these units will correct that.

These Mark III marines are part of a bunch of models I got used on Ebay. The price was right and they were advertised as primed only. Once I got them it was obvious they had been primed over a base coat of some red metallic paint. They were also glued together with what may well have been Portland cement which made swapping the bolters for plasma guns a bit tricky. All considered, I think the rehab project came out nicely. 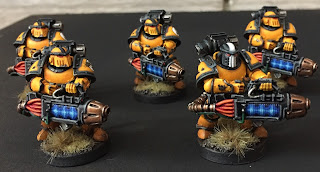 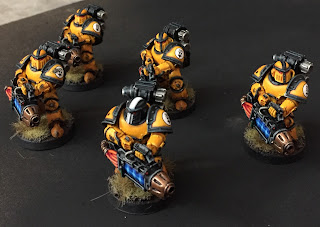 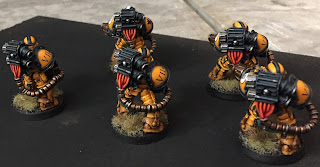 The Ryza plasma gun squad is from my original purchase last summer. Re-forming the resin hose was a nightmare and these are the first models I've assembled with the aid of boiling water. Despite my efforts, the hoses broke on several models and it was up to green stuff and superglue to finish the job. 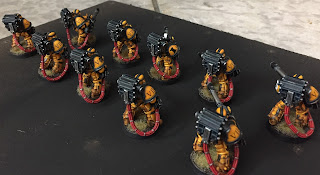 A full squad of Ryza Lascannons for long range firepower. The lascannon cables worked much better at bending to form than the plasma cannons. They aren't segmented like the plasma cannons which keeps them from breaking.

These are the last of the Mark III marines I have for this army. I must say that although I love the look of them, I found them a real slog to paint. Looking forward the the Mark IV units I have in the pipe.
Posted by MFraser at 3:44 PM

Excuse me this isn't relevant to your beatiful imperial fists, But I was wondering how you painted your alpha legion, the blue?. I've been stuck on how to do a NMM alpha legion as others are too dark or too light, but yours is just right.

Oh sorry!, Lol Your alpha legion, I thought all posts were done by you.

I have a feeling that a few tutorial posts by Greg would be quite popular.

Whenever I see Imperial Fists for some reason I think of the song Screaming Fist by the Viletones...?