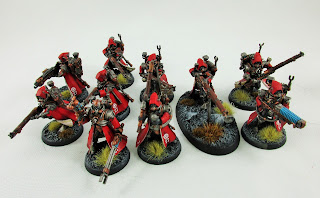 First of all, I can't believe it's been two years since the first onset of "Titan Madness" - the mysterious malady that struck me and Conscript Greg and compelled us to buy and paint two Armorcast Reaver Titans.

At the time, I had idly mused over picking up some of the new Cult Mechanicus models as an adjunct to the big Titan. "Not only should you do that, it would be irresponsible not to!" Greg helpfully remarked. So after two years, I've finally finished the Rangers, and a Forgeworld Magos Dominus (Tech-Priest proxy) to lead them to battle. 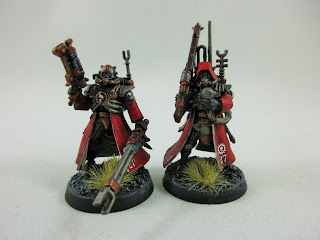 First, the Rangers. These are pretty cool models but there are definitely some tricks to keep in mind when painting them. For one, I would recommend following Duncan's (GW YouTube painting wizard) example and paint the inside of the cloaks before anything else. Otherwise you'll end up making a mess of the painted legs. 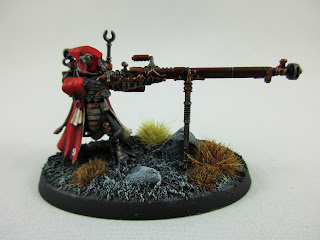 Although my Reaver Titan is painted in the colours of the Legio Metalica, I opted for the traditional Martian treatment on the Rangers. I think it's just my aversion to painting white, but I reckon the iconic Martian livery suits the models best. The red cloaks are painted Mephiston Red, washed with Nuln Oil (along with the rest of the model), re-highlighted with Mephiston then highlighted with Evil Sunz Scarlet. 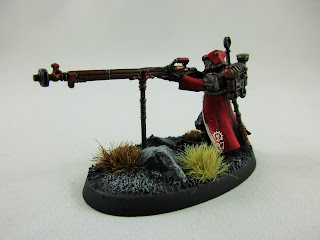 The metal bits were painted Leadbelcher, with the gold parts done with Brass Scorpion highlighted with Balthasar Gold. 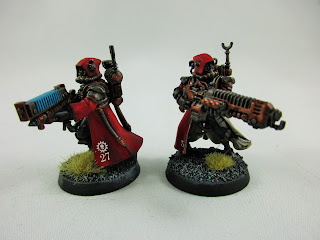 One cool thing about the Rangers is that your squad of ten gets up to three special weapons - along with the Transuranic Arquebus (above) I built both other ones - Arc Rifle and Plasma Caliver.

Of course, the rest of the... lads(?) carry the standard Galvanic rifles. 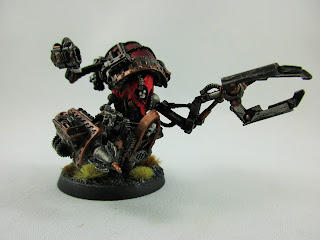 Rather than spend $43 on a plastic Tech-Priest (!) I opted to spend about the same amount on a Magos Dominus from Forgeworld. The great thing about these Cult Mechanicus types is that their weaponry isn't really that recognizable, so pretty much anything can represent anything. 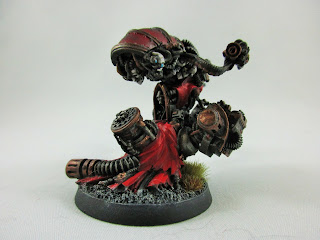 The Magos was pretty easy to assemble and a snap to paint. I used the same colours as the Rangers, except that I painted the "candy shell" a darker Khorne Red and weathered it a bit with the sponge. 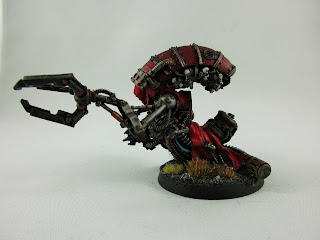 I actually agonized somewhat over what size base to use. The model was supplied with a 40mm round but it seemed a tad weedy considering the size of the model. However the 60mm seemed excessive so I went with the 40.

Anyway he's done so I can get on with the next things - a Kastelan robot maniple and Onager Dunecrawler! I figure with that stuff done we can play some smaller Rogue Trader-type games. Looking forward to getting these on the table!