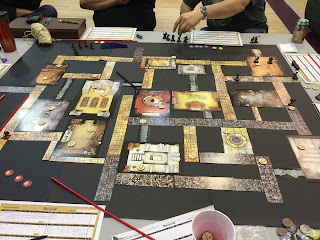 Two weeks back, Conscript Greg and I ran some games at PrairieCon, Manitoba's premiere gaming convention. This was the 37th iteration of the venerable event, and my old pal Kelly reminded me that we'd been attending together since PrairieCon III, lo those many years ago. Thanks Kel! ;-)

Anyway, we always try to bring something different out to the Con. Some years it's been Star Wars skirmish or space battles, other years a different sci-fi game; WWII or who knows what. But this year, since PrairieCon started as (and remains at heart) a D&D tournament, I thought I should bring out the modern miniatures equivalent of OSR: Otherworld Fantasy Skirmish, in a dungeon. 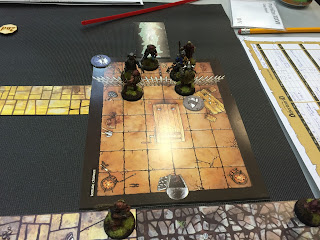 So I gathered six factions: two groups of dungeon adventurers, the Orcs of the Severed Hand and some Pig-Faced Orcs, some Skaven, and a couple vampires and their minions. Conscript Byron made some awesome laser-cut tokens for me to use, and I laid out the dungeon using Games Workshop's excellent and long out-of-print Dungeon Floor Plans. 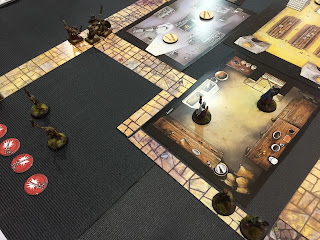 The basic premise was simple: the dungeon beneath Castle Drax had long been home to monsters of various descriptions, in thrall to the mysterious Wizard who lived there. But the Wizard hasn't been seen for some time, and rumours abound of monsters fleeing the dungeon in the middle of the night... sounds like the perfect opportunity for plunder and pillage in an abandoned dungeon, no? 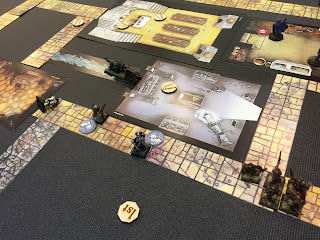 Of course, every faction had this same idea and therein lies the opportunity for a game. As mentioned, Byron made up some superb tokens for me based on Chris Abbey's excellent six-player Otherworld game. Cheers Chris! The Adventure tokens Byron created replaced the cardboard ones produced by Otherworld - I needed about 25 for this game and only 8 come in the set.

If you haven't played Otherworld yet, it's a hoot. For me one of the joys of the game is the Adventure deck. When your model comes across an Adventure token you pick the top card off the deck to determine the result - a treasure item, a trap, another special game effect, or a Wandering Monster!
In our game, each faction had a couple models in its Wandering Monster pool and these came onto the table when the WM card was drawn, a very cool mechanic.

Too much happened in the game to go into blow by blow, but if you were wondering what happened to the Wizard and why all the monsters left the dungeon... 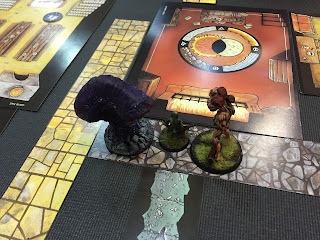 It was because a Purple Worm happened to surface in his bedroom, and ate him! (Shown here about to gobble a hapless Elven Ranger) 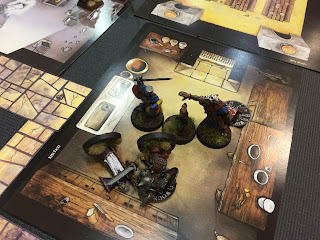 The game was great fun and we tabulated victory according to treasure taken and XPs notionally gained for killing characters from other factions. The winner was Oliver, with 13 VPs (his adventurer group shown above, finishing off Byron's Orcs of the Porcine Visage). 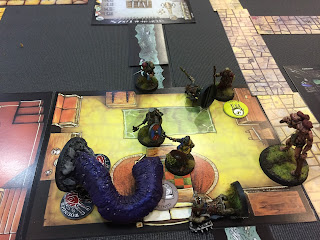 Conscript Dave's band of murder hoboes was arguably the most dangerous group in the dungeon, here shown finishing off the Purple Worm... 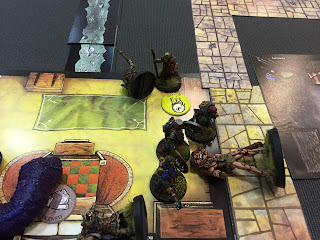 ...and right after that, Craig's Wandering Ettin, Phil.

I had great fun running the game, and I want to thank Oliver, Byron, Craig, Dave, Brett and Andy for playing and Greg for hanging in with the Purple Worm.

I took a few pics of the models we used today as I finally put them away. Here they are: 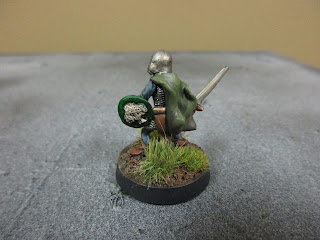 This was a fantastic game Dallas. Very, very cool. The cold-blooded efficiency of Dave's murder hoboes was particularly notable, but I also enjoyed the frustrations of the vampire clan, caught up in constant webbing and other obstructions...

And those tokens from Byron really do take it up a notch.