It has taken over a year, but my Horus Heresy forces finally have a proper vehicle! This is a Land Raider Proteus from Forge World, painted to accompany the Sons of Horus into action against the dupes of the False Emperor.


So far, with the exception of El Booze, and Ferrum Mori, my 30k painting efforts have been concentrated on infantry - various foot slogging Marines as well as some Solar Auxilia.  But as you will see in a battle report that I expect Dallas to post here shortly, infantry alone can't always get the job done.  It's time to round out my Heresy forces with some vehicles, and the Knights and Titans are a little too unbalanced to set up for our Thursday games.

The Land Raider Proteus is a wonderful model design from Forge World, a shout out to the original Land Raider plastic models from the Rogue Trader era.  When I think of the Horus Heresy games that I played with the "Space Marine" and later "Epic" games, Land Raiders were always prominent so I really wanted one to accompany the Sons of Horus and their friends on the table.

A vehicle model from Forge World is always a fraught experience.  The designs are (for the most part) lovely, but the quality of the casting can be hit and miss.  Further complicating matters is the utter lack of instructions.  I have heard many horror stories in particular related to the Land-Raider-based vehicles, as the design of the model is open to rage-induction depending on how reliably the resin was cast. 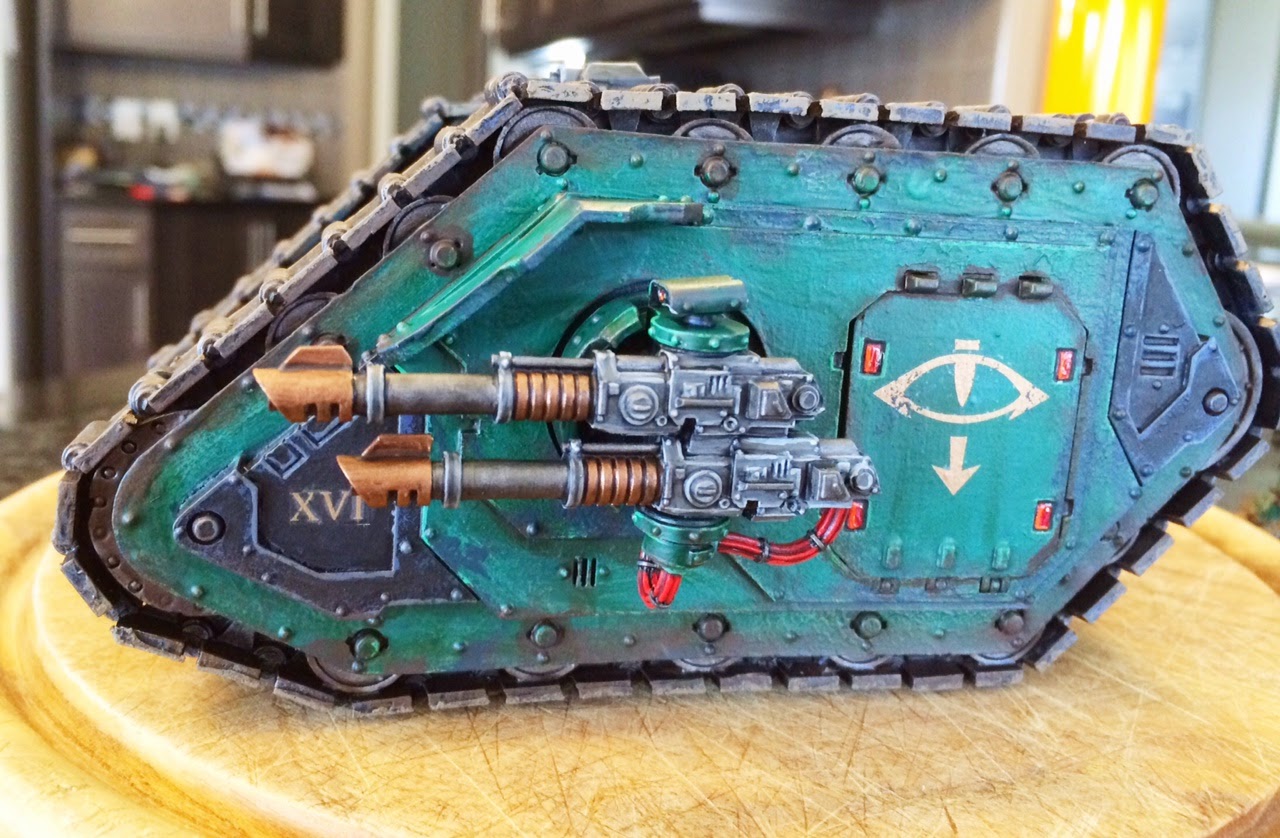 Lucky for me this kit was relatively well cast. I had a problem with one of the lascannon mounting rings - it was laughably thin and a chunk came right off during assembly prep. The other challenge was the side doors - they barely fit, and it was more than a matter of a mis-cast - they were flat-out too big, and I had to do some carving to get them to sit in the recess of the side of the vehicle.

Figuring out how to mount the tracks was also a bit of a puzzle, but I was able to sort it out.  I was lucky, the tracks were straight and well-cast, and the track channels were cast properly and so the tracks fit!

Chuffed about getting the thing put together, it wasn't until I started painting that I realized I had messed up - I should have left the tracks off for painting.  Getting the black primer into the recesses of the tracks was a huge pain in the a@@.  If I do another one of these, the tracks will wait and get a separate paint job on the side.

At least I was smart enough to leave the lascannon mounts and cow catcher aside to paint separately.

The painting results on this overall were...OK...I used the same greens and edge highlighting I have been doing on the Sons of Horus marines and while I looks alright, it's not as smooth as I would wish it to be.  I will probably have to break down and try and airbrush at some point if that is something I'm really interested in achieving...

The decals are from the Forge World Sons of Horus decal sheet - the big "eye of Horus" symbols turned out great, but the roman numeral legion markings silvered up like crazy!  There is always something that comes up when painting a Forge World vehicle...you can still see the damn silvered reflection in some of the photos when you look at the "XVI" near the front.

Anyway, I sorted the decals as best I could, and did some hard core weathering - lots of sponge chipping, weather powder, and even some oil paint! However, I noticed that the Testors Dullcote tends to wipe out the effects of weathering powder, so I may have to go back and add a bit more. But overall it still turned out OK, well enough to roll out on to the table and get shot up in the first turn.

Of course a single vehicle still leaves my enlightened supporters of Horus short when it comes to transport - I hope to add some more conventional Rhinos, and maybe one or two more terrifying vehicle bits from the Legion armory.  But it's great to have this vehicle done and it will hopefully inspire more progress on some others.  Horus for hope!
Posted by Greg B at 12:18 PM

Looks great! Can't wait to face this on the table.

Despite the difficulties you've made a lovely job of it mate.