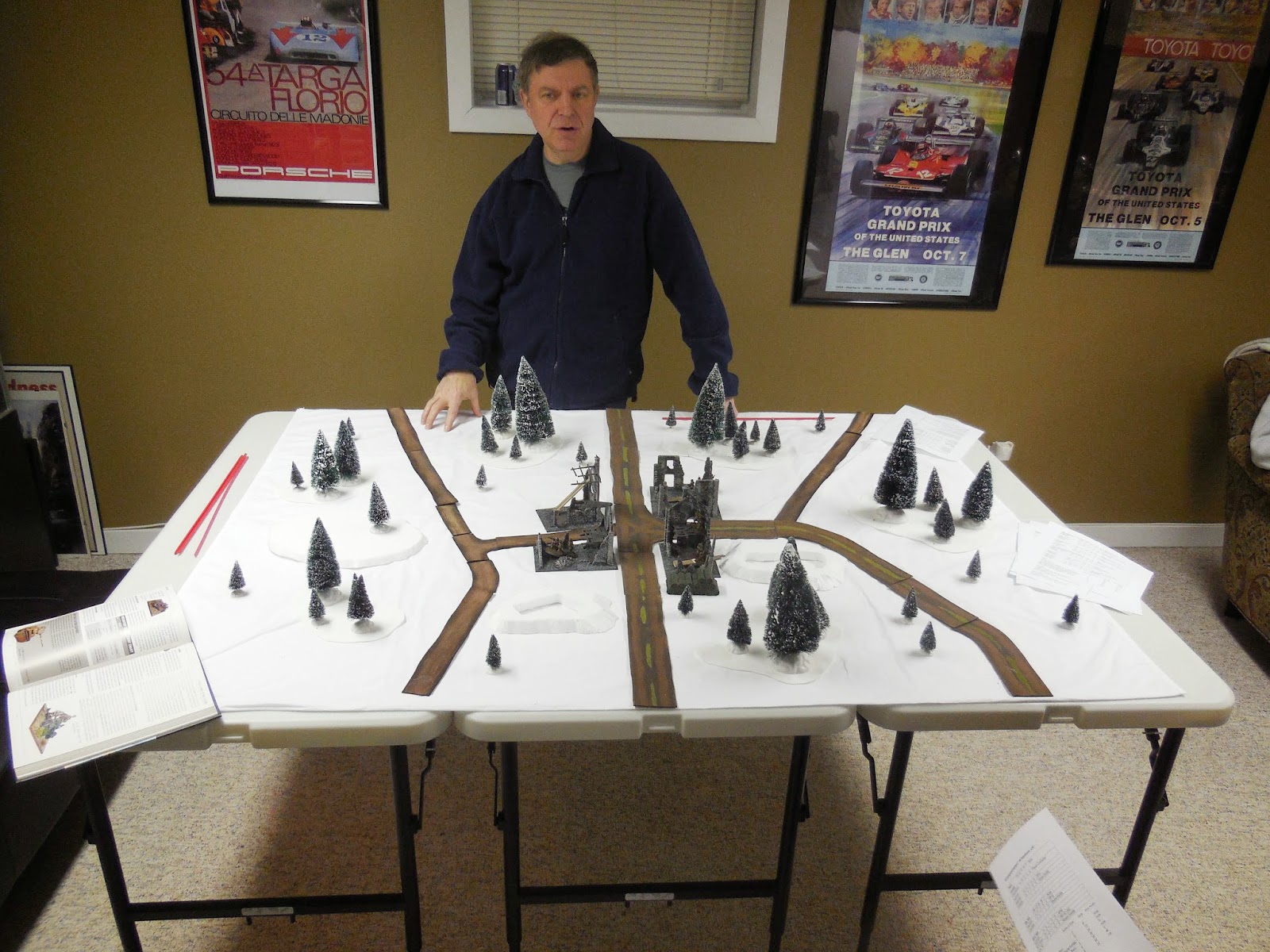 Last Thursday I had a yen to play a winter game. Having just finished scratchbuilding some schurzen for my Classic Armor Diecast Pzkpfw. IV's, I wanted to get them on the table - even though the tactical numbering and weathering hasn't been done yet :-(  Gamer's ADD - but stay tuned for a post on those in the near future. Anyway, I laid out some Ardennes-y looking terrain for the Germans and Americans to fight over. The scenario we used was one from Bolt Action but we used our house rules, "Blitzkrieg!" for the game. 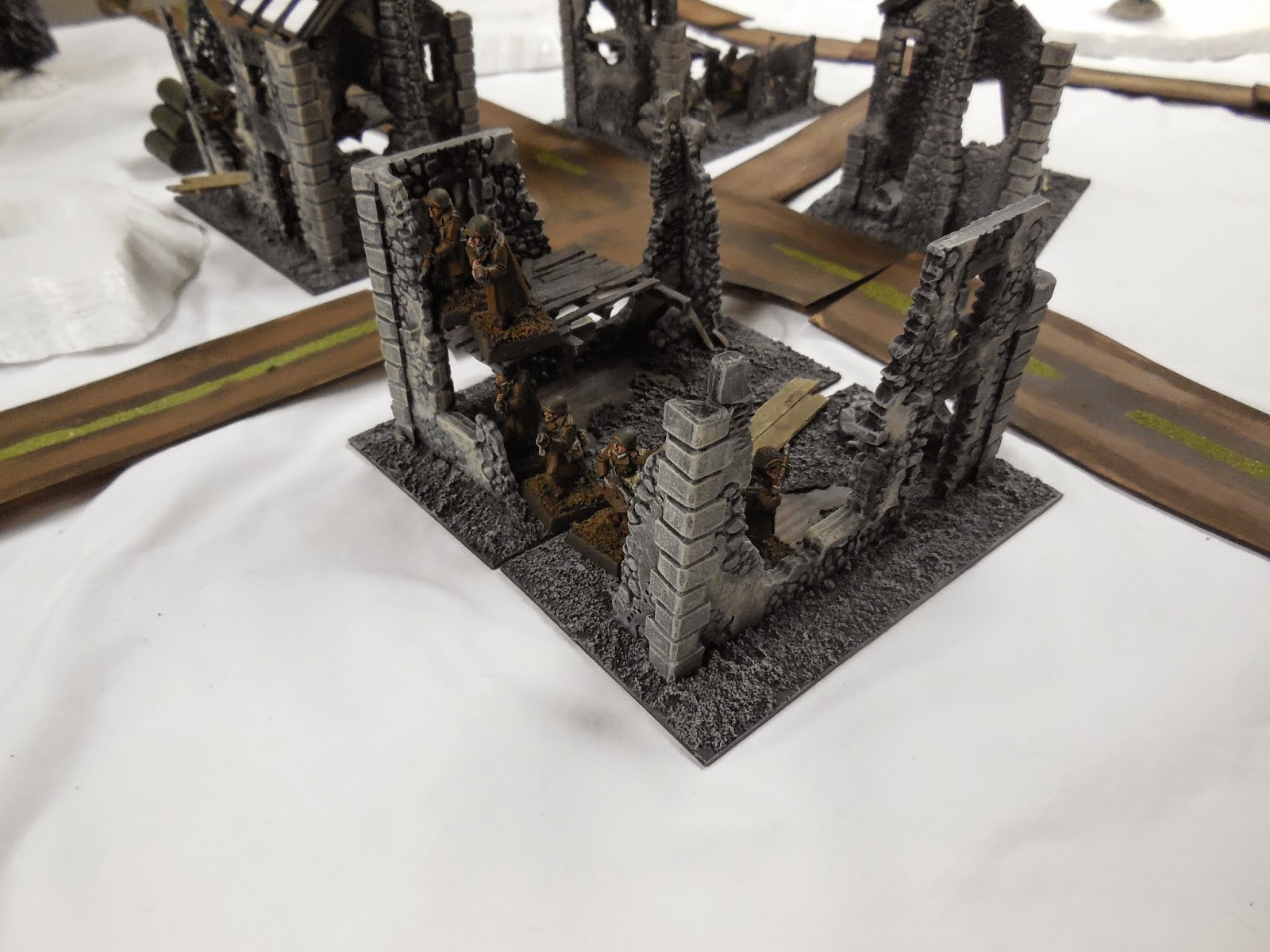 The objective of the scenario was to be the side holding the buildings with no enemy contesting. (The Germans were the attacking side, trying to punch through and take a vital crossroads. The Americans got an infantry squad and a bazooka starting in the village.) As this is a forested area, I ruled that any off-road movement by vehicles was restricted to d6" and only after passing a Training check. Of course, in the real Battle of the Bulge any traffic was restricted to roads for this reason. 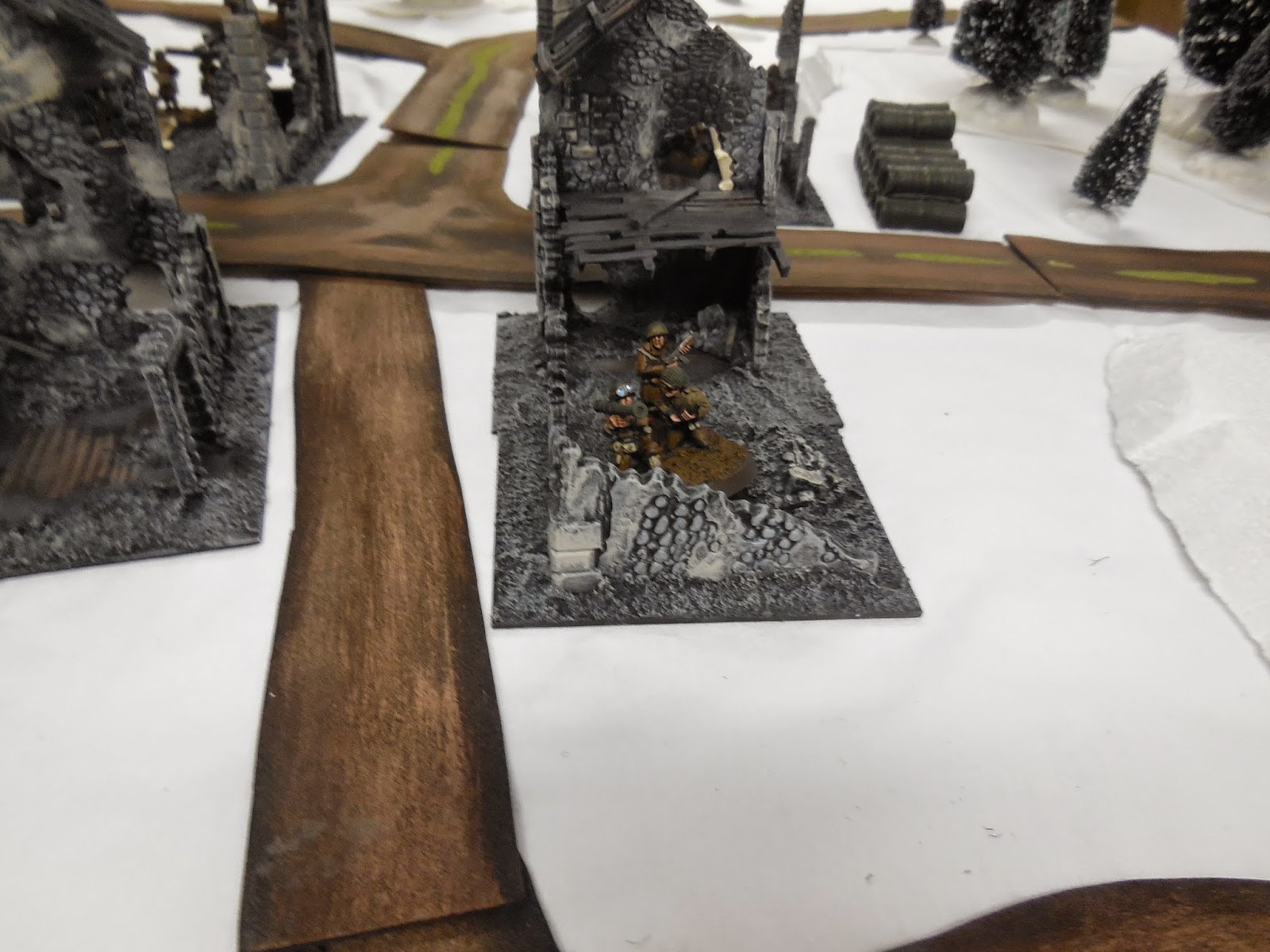 American bazooka team. The remaining American relief force consisted of two squads of paratroopers, three Sherman tanks and a couple of bazooka teams. Half of them started on the table edge. The rest of the Americans came on as reserves, starting on turn 2. I ruled that in order to come on, the unit must pass a Training check. The Germans got three Waffen-SS panzergrenadier sections each in a Sdkfz. 251 halftrack, a command section and Panzerschreck team in a Sdkfz. 250, and three Pzkpfw. IV(h) tanks. Two of the infantry sections started the first turn on the table, dismounted - seen above in the trees at top right and centre right. 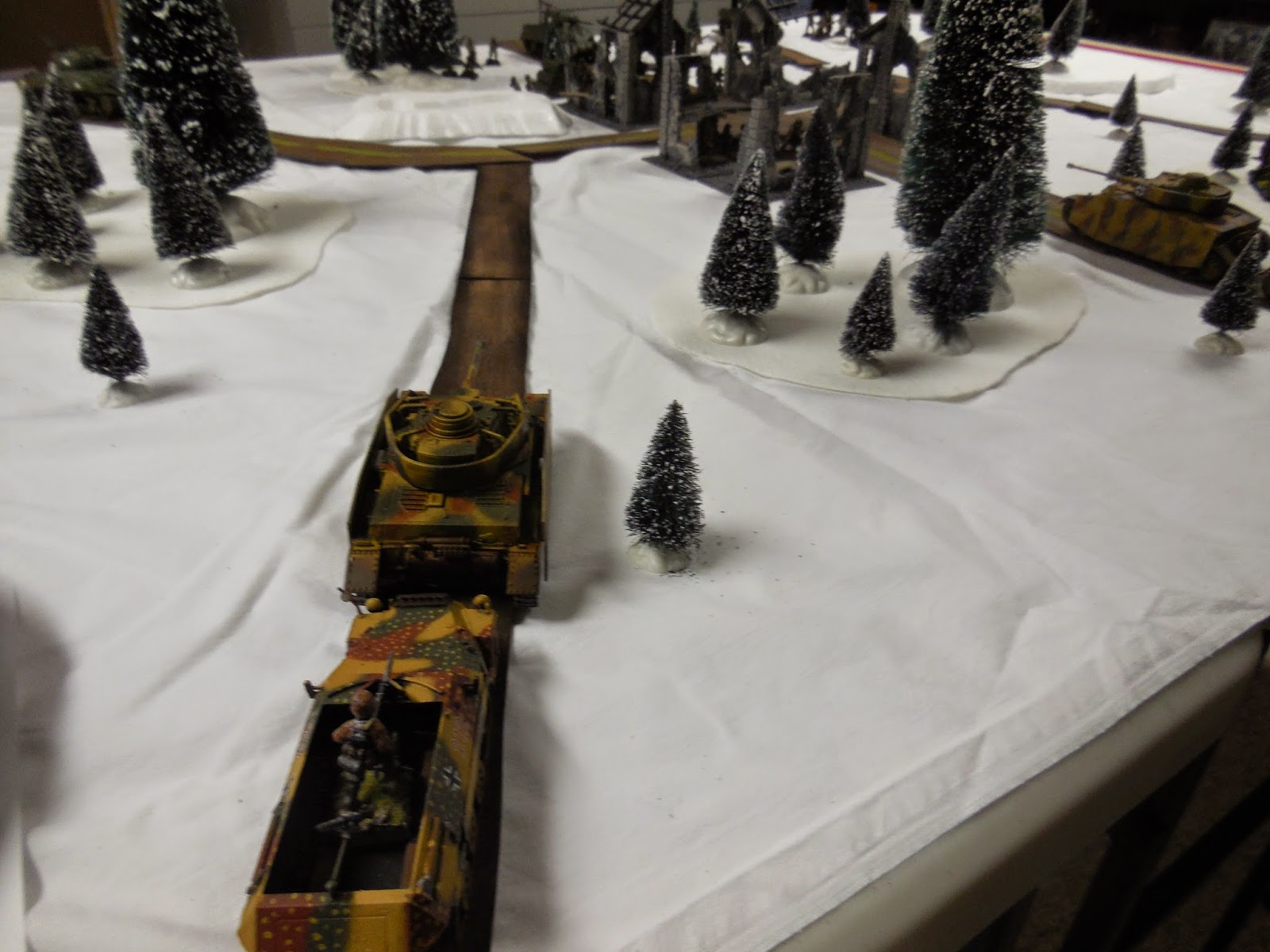 It took awhile for the Germans to come on table as they were finding it difficult to pass their Training checks. Probably something like this going on off table: 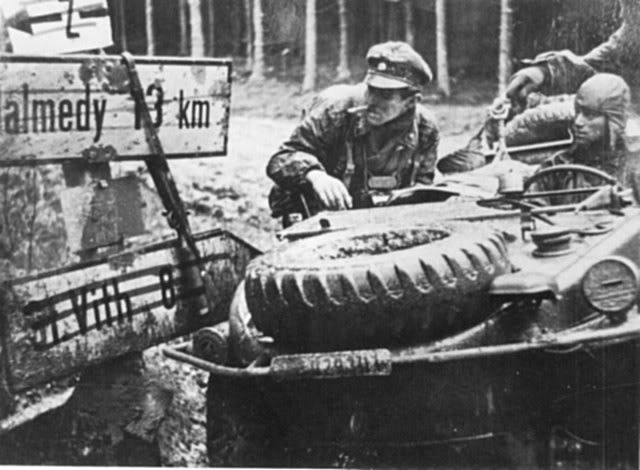 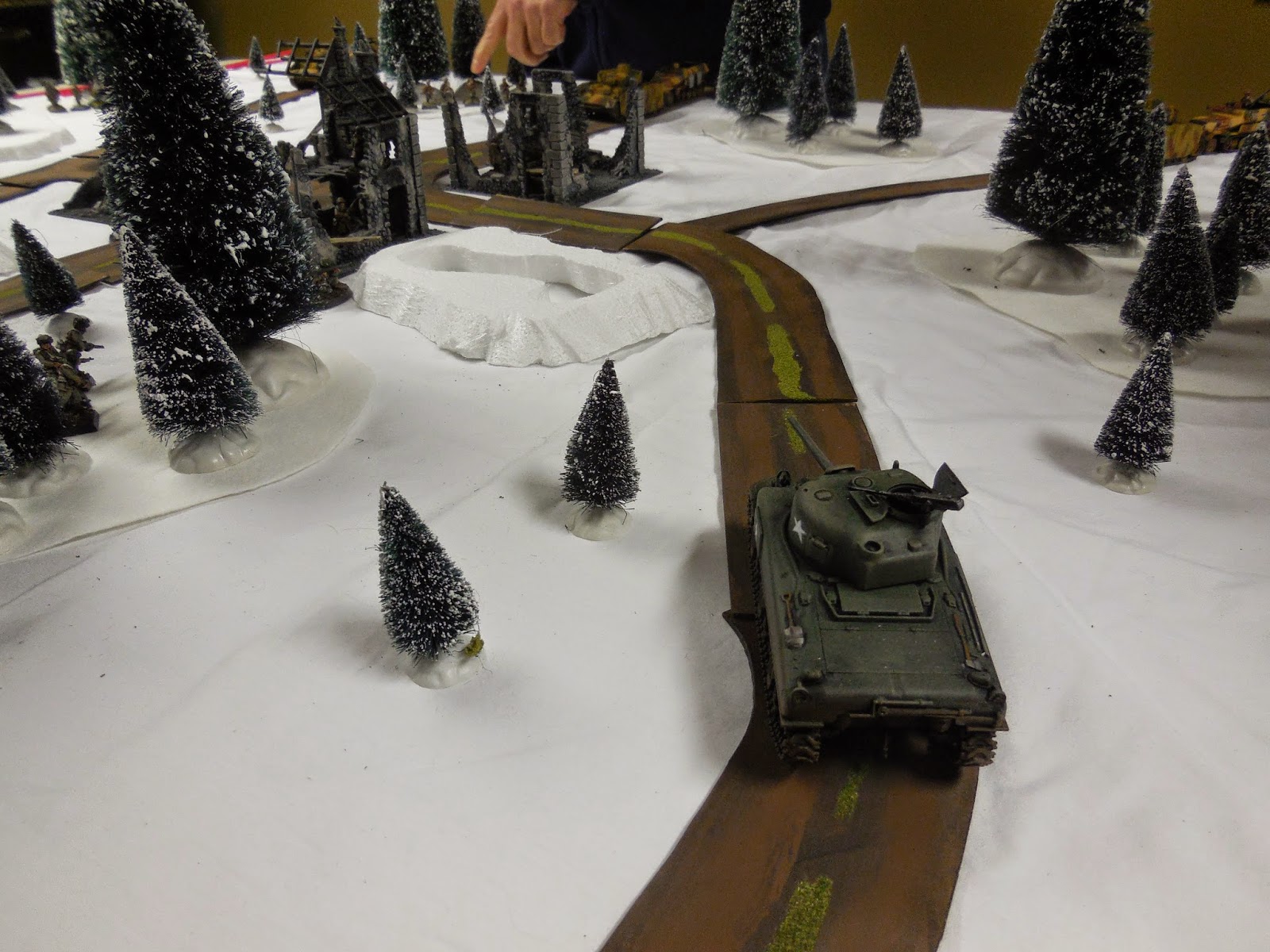 The American Shermans had no such issues and one tank rolled on from each US entry point. 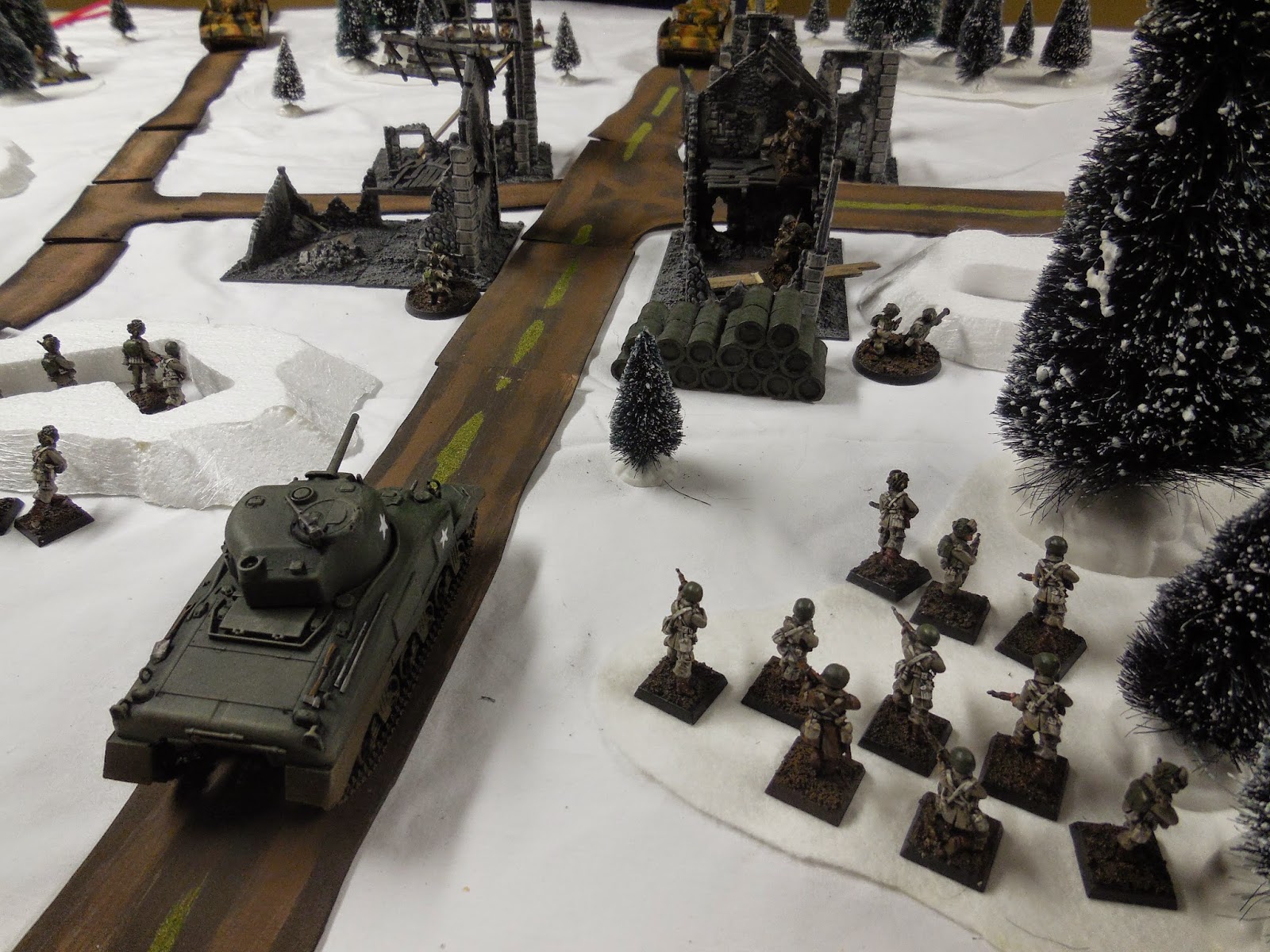 A squad of paratroopers moved up to the right of the road, while a .30 cal. team hopped into the foxholes to the left. 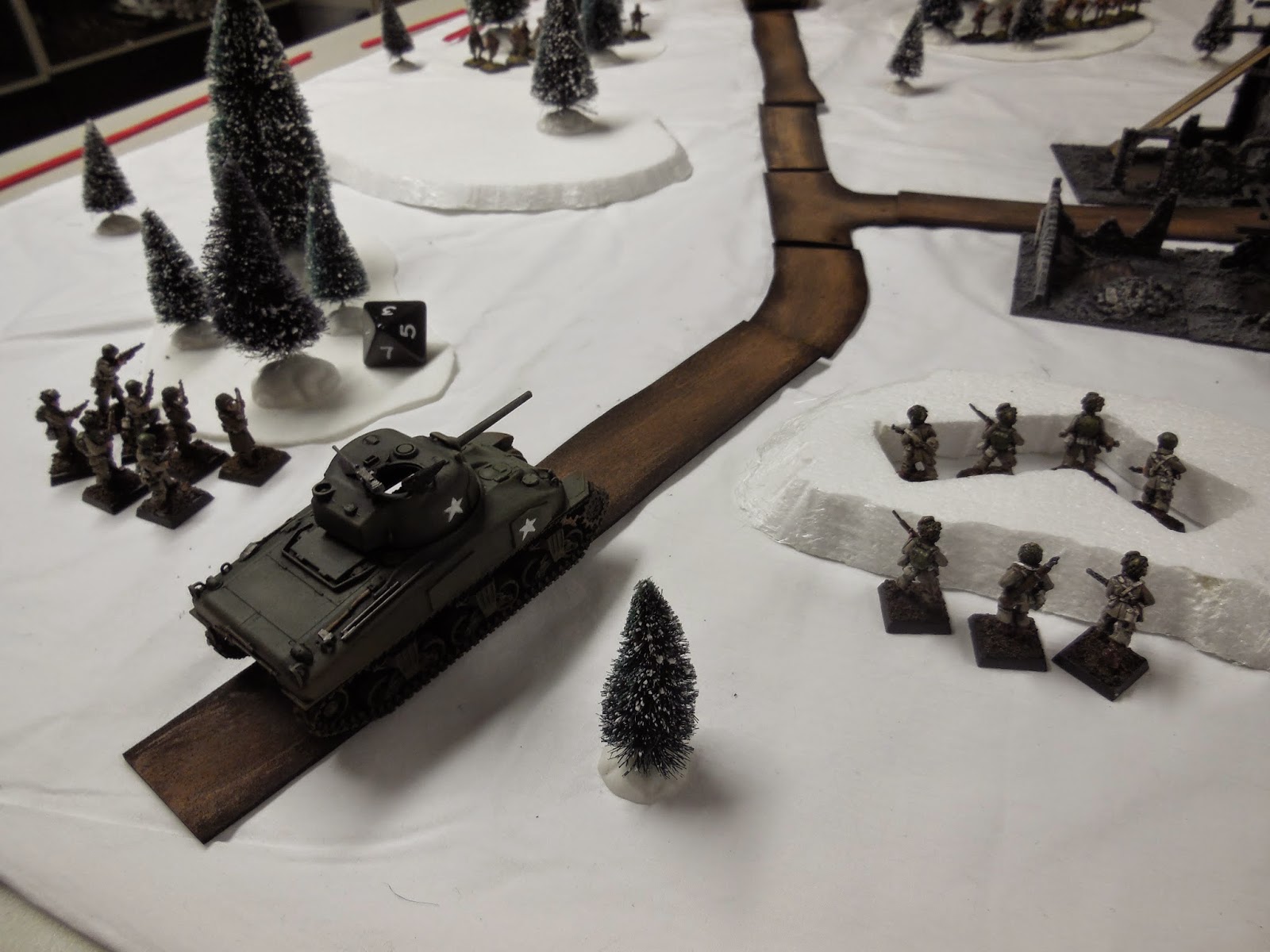 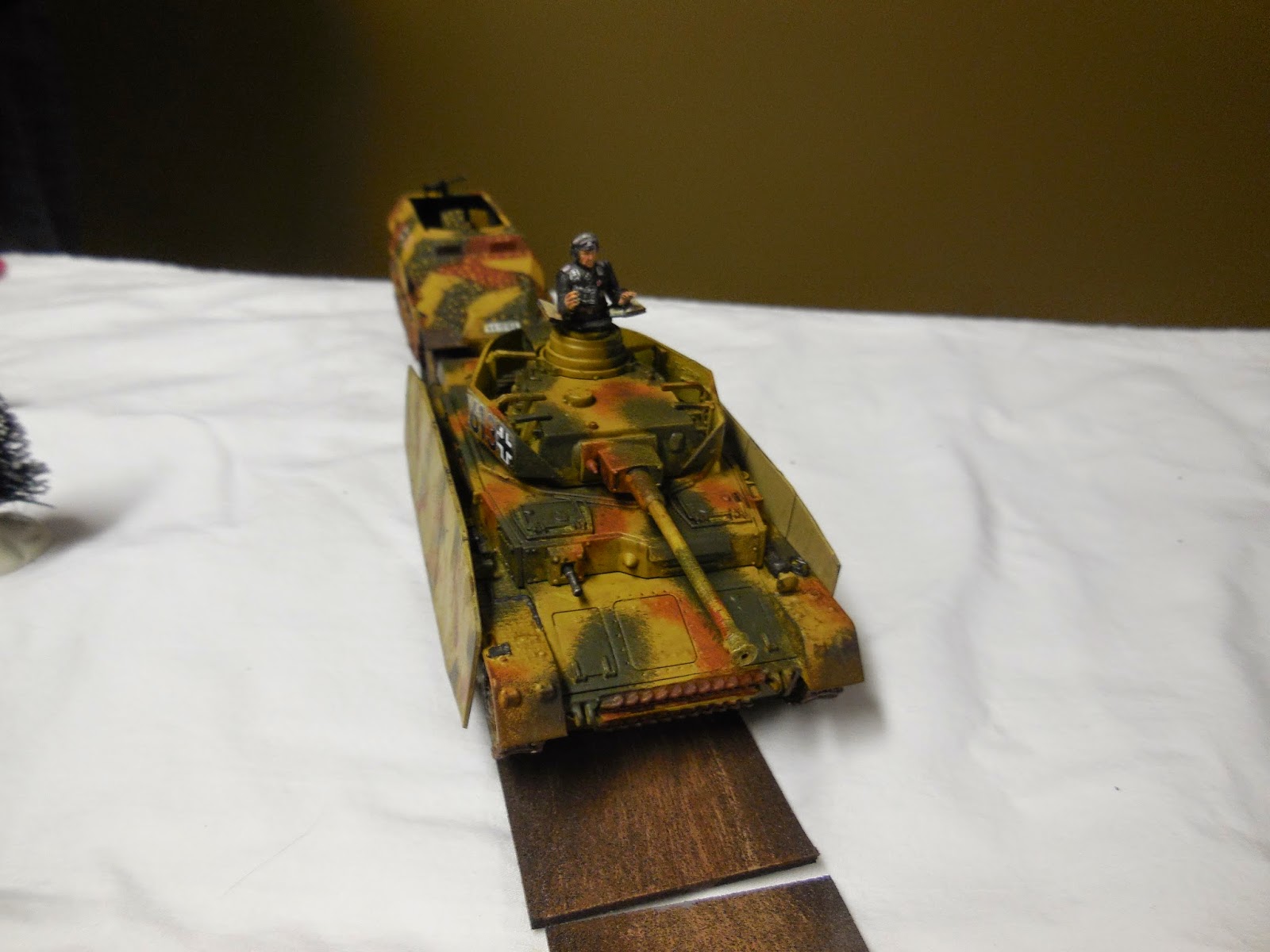 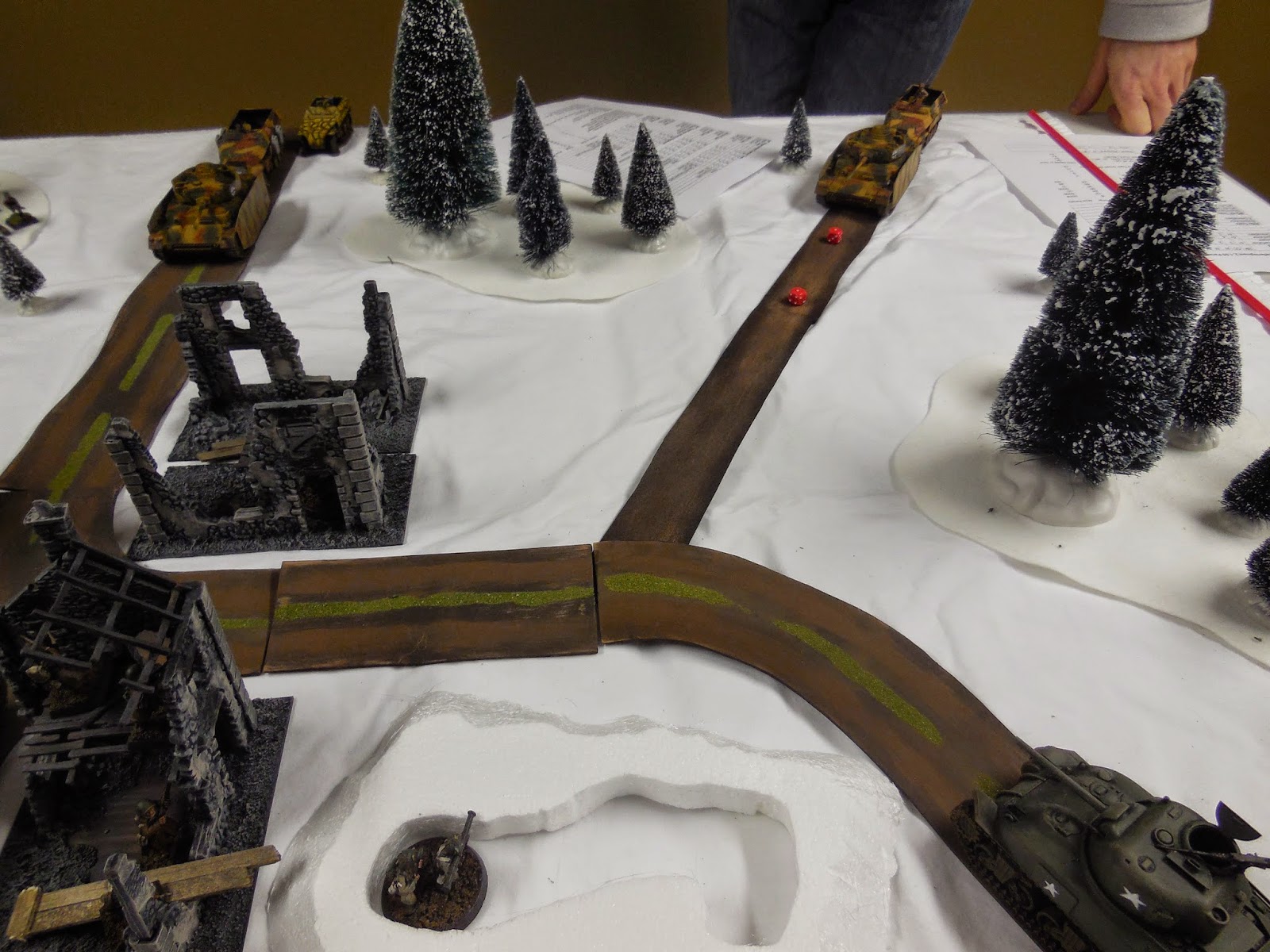 Bazooka teams wait in ambush. Our ruleset allows "overwatch" fire - basically you forego shooting in your own turn and place a marker where you're aiming. If in its next turn, a target moves within range of the marker, you can take your shot at that point. 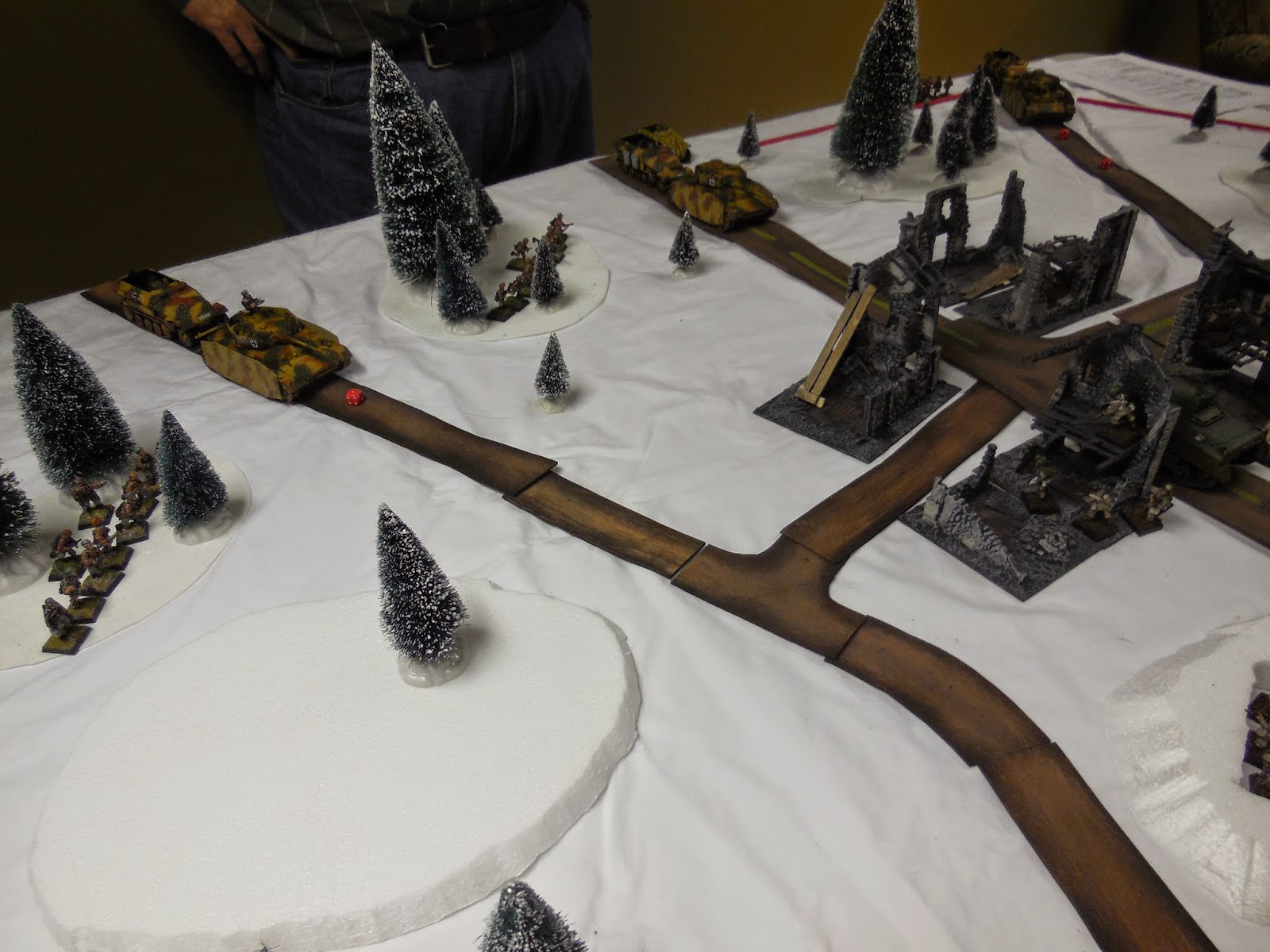 Bazookas have the roads locked down... 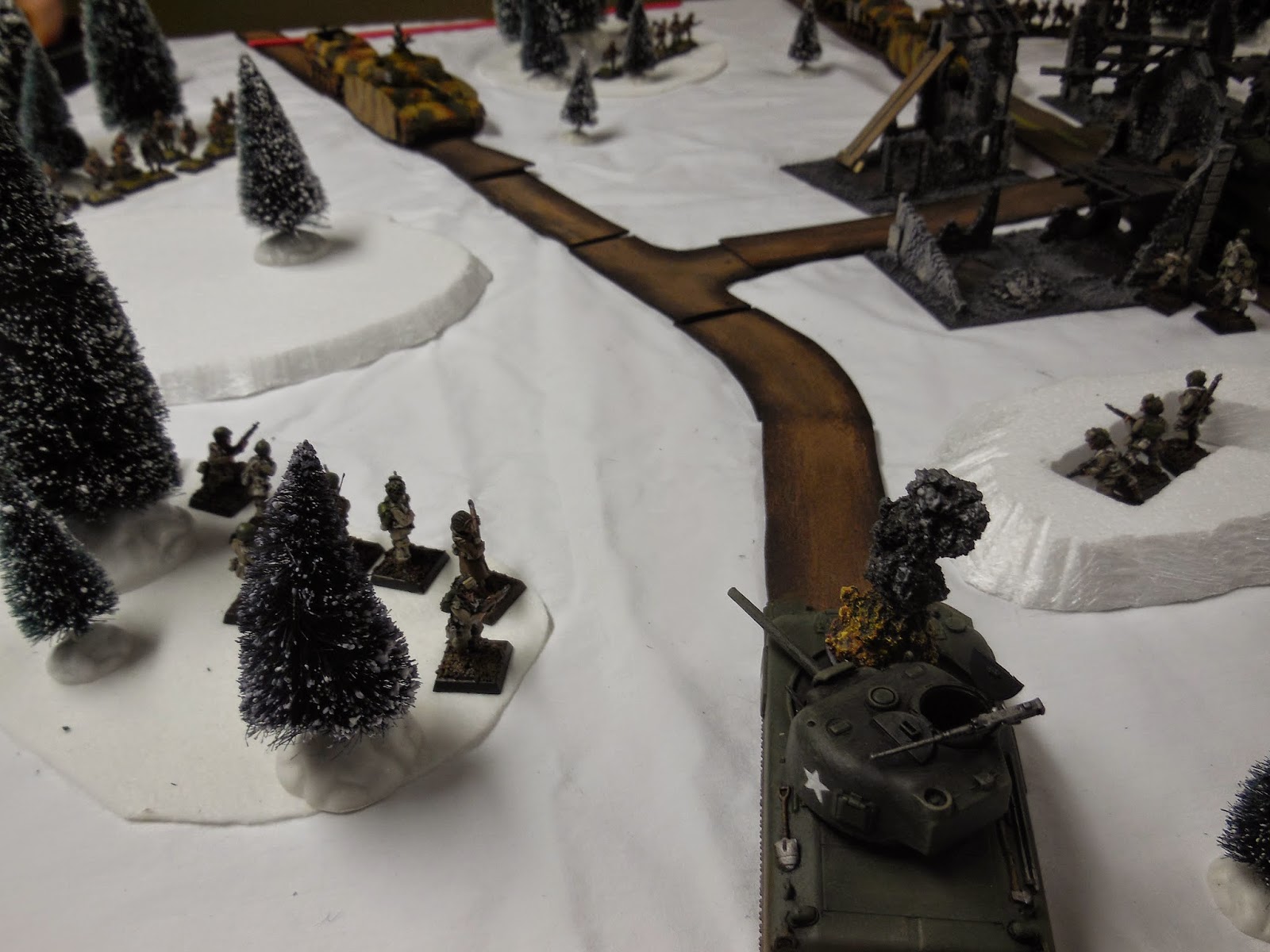 German infantry shoot up the American bazooka team in the ruined house while the "IV" rolls forward and knocks out the Sherman. 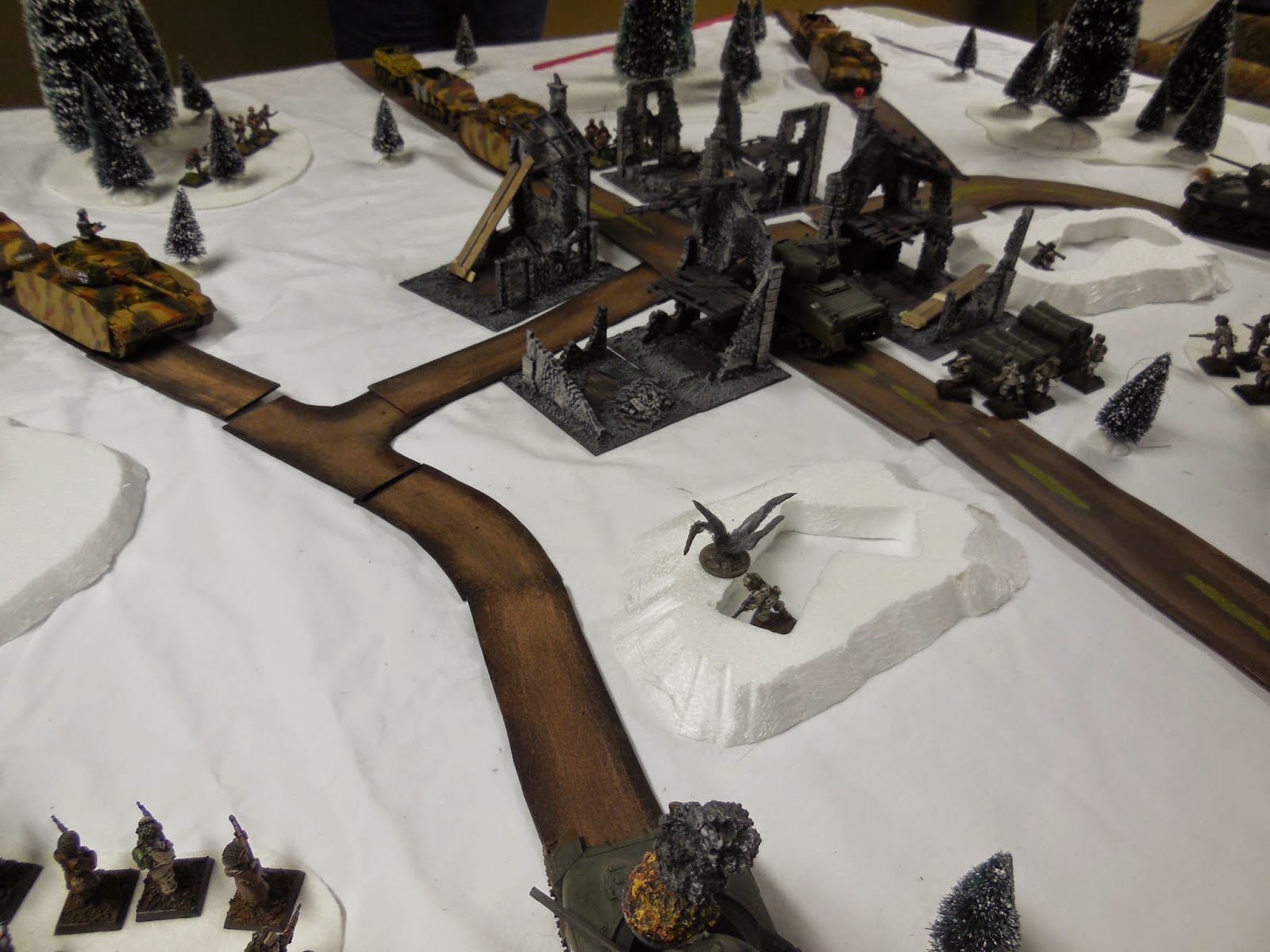 Next turn, German machineguns turn on the foxhole. 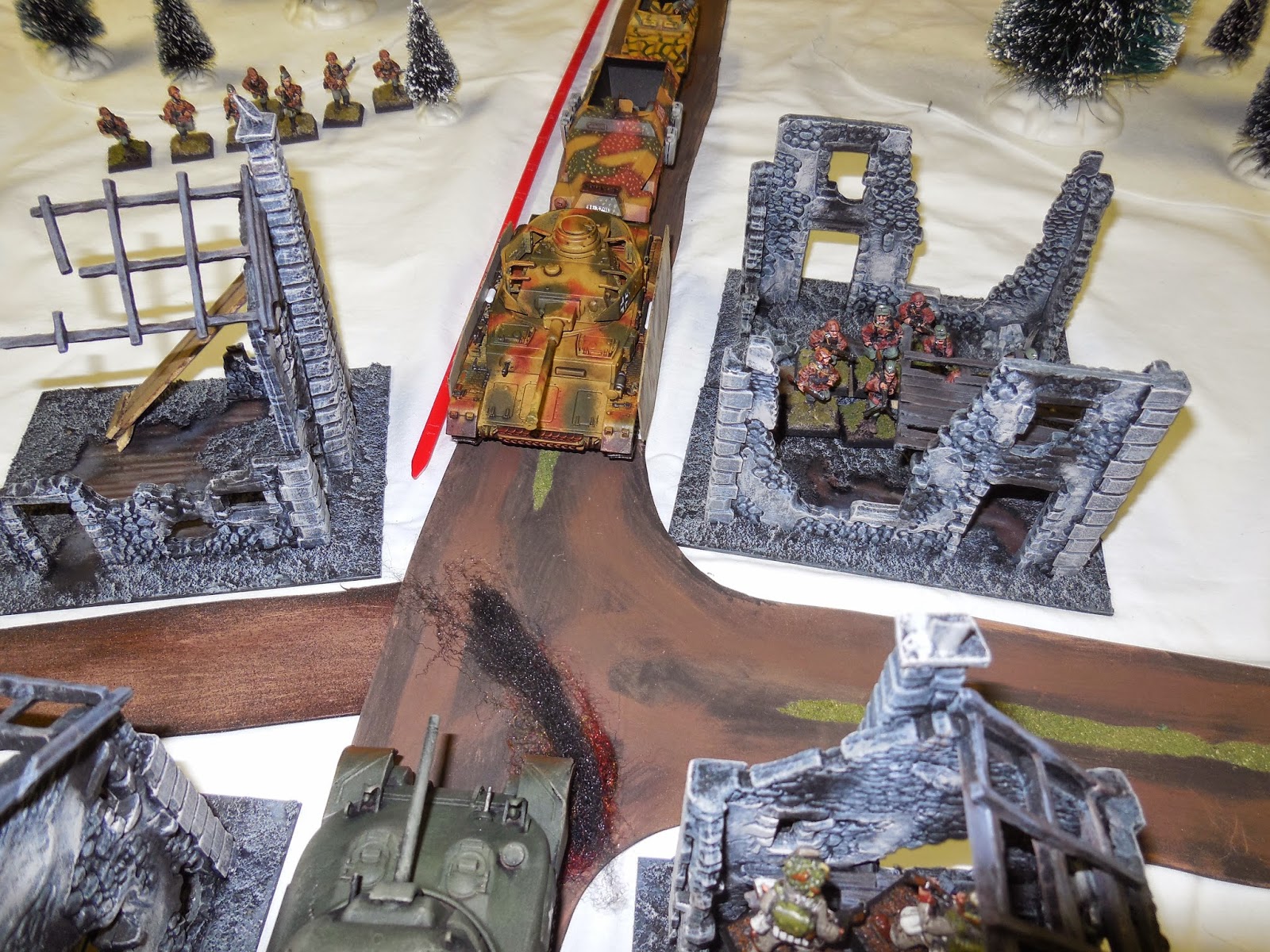 Over in the centre, SS infantry take the house ruin while the Sherman gets immobilized. The game ended in a draw, with Germans at the crossroads but the Americans contesting their possession of the objective. The Shermans were all "pillboxed" with their tracks knocked off or engines damaged, but there were still paratroopers about to cause the Germans problems in consolidating.

The Americans' die rolling luck was appalling - I think Mike in particular suffered from "1-itis" with his tanks. A fun game though and I like the aesthetic of the winter terrain. I think that in Spring I may do some work on the winter ground cloth - my ubiquitous Martha Stewart bedsheet. I reckon it could benefit from a light random spray with brown or green-yellow rattlecan - just to give a bit of interest and texture. Of course it's always more fun to play winter-themed games when it's nice and hot outside... right now there's plenty of winter terrain around - just in 1:1 scale :-(
Posted by Dallas at 10:45 AM

Actually Mike wasn't the only one with terrible luck on the dice - I couldn't hit the ocean with the Shermans...

Great game Dallas - thanks very much for hosting and setting it up.

My contribution was limited to providing targets for the Germans to sight their rifles with.

Great looking game. Working on a winter cloth myself, I would be interested in seeing how you get on.
Cheers
Stu

Great looking table, terrain, figures and vehicles top-notch. I do like this scenario. Great looking schurzen too!