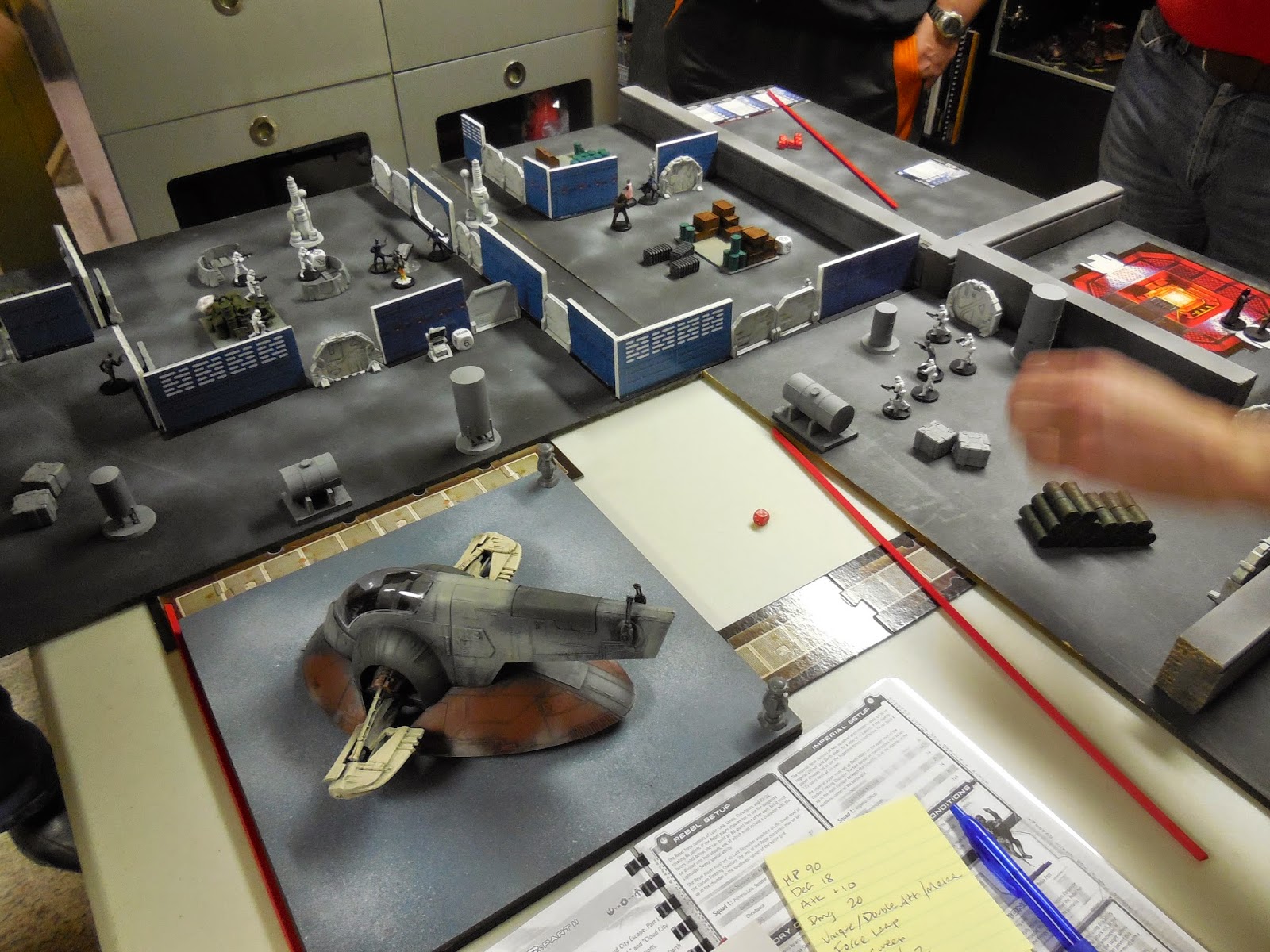 A couple weeks ago I ran a game of Star Wars Miniature Battles using a scenario from the "Ultimate Missions" scenario book. The game was part of a campaign based on Cloud City from The Empire Strikes Back. In the game the Rebels (Leia, Chewbacca, R2-D2 and Lando) had to rescue Han Solo before Boba Fett could escape in Slave I, while Luke faced Darth Vader in personal combat in the freezing chamber.

I set up the terrain using some Death Star walls I had done up before, with random detritus and crates scattered about (these Force users have to have something to throw around at each other). I used doors from the excellent new Sedition Wars terrain set and a "Freeze Chamber" tile from the old GW Space Hulk game. Slave I was represented by the Revell model kit, along with a cool "Han in Carbonite" from the same kit. The figures are mostly SWMB prepaints, with Luke in Bespin Fatigues and Leia in Bespin Outfit painted by me - they're figures from the old "true 25mm" Grenadier/West End Games Star Wars range. 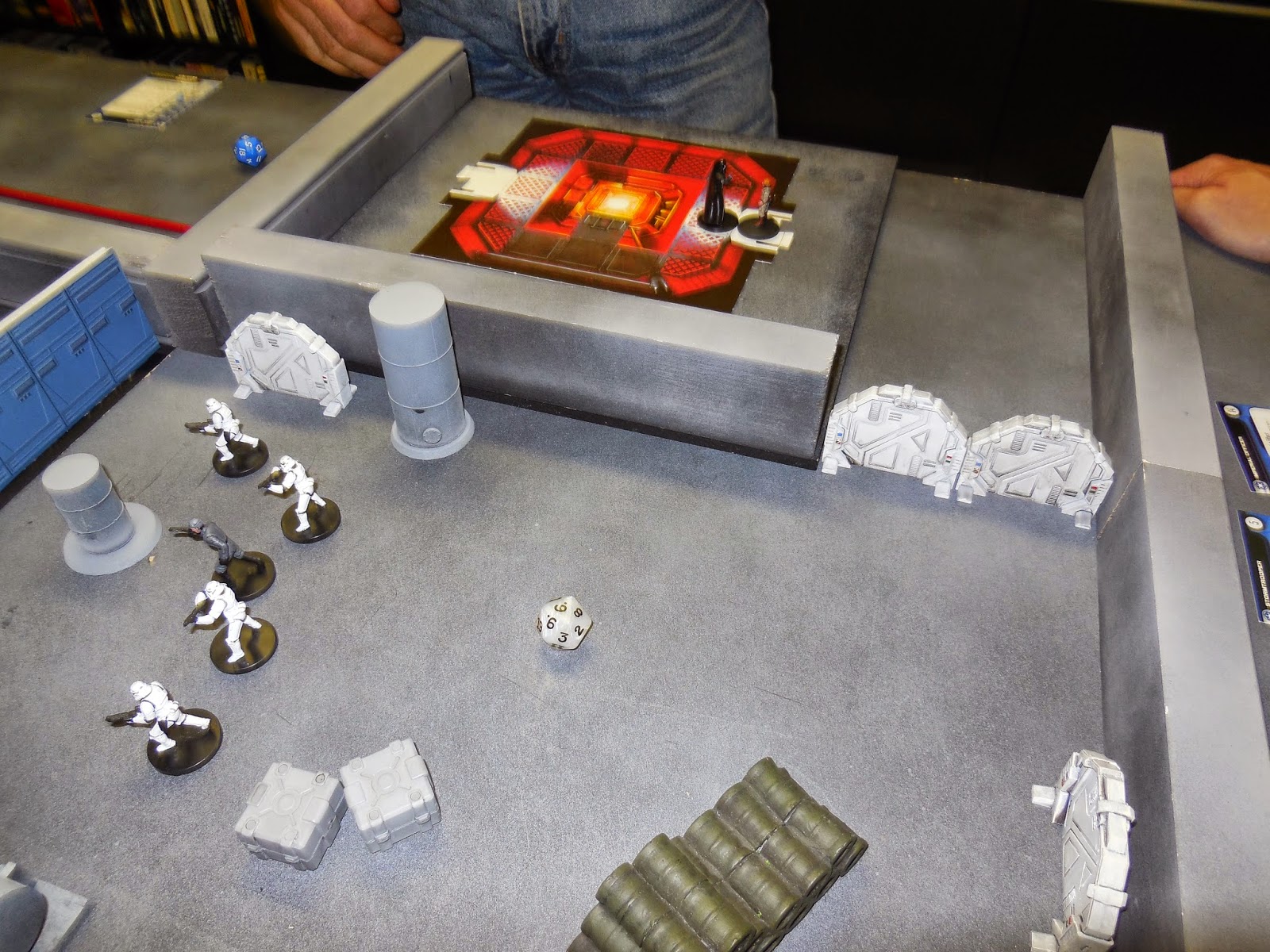 Luke and Darth swing their lightsabers around as an Imperial squad heads toward the real action. 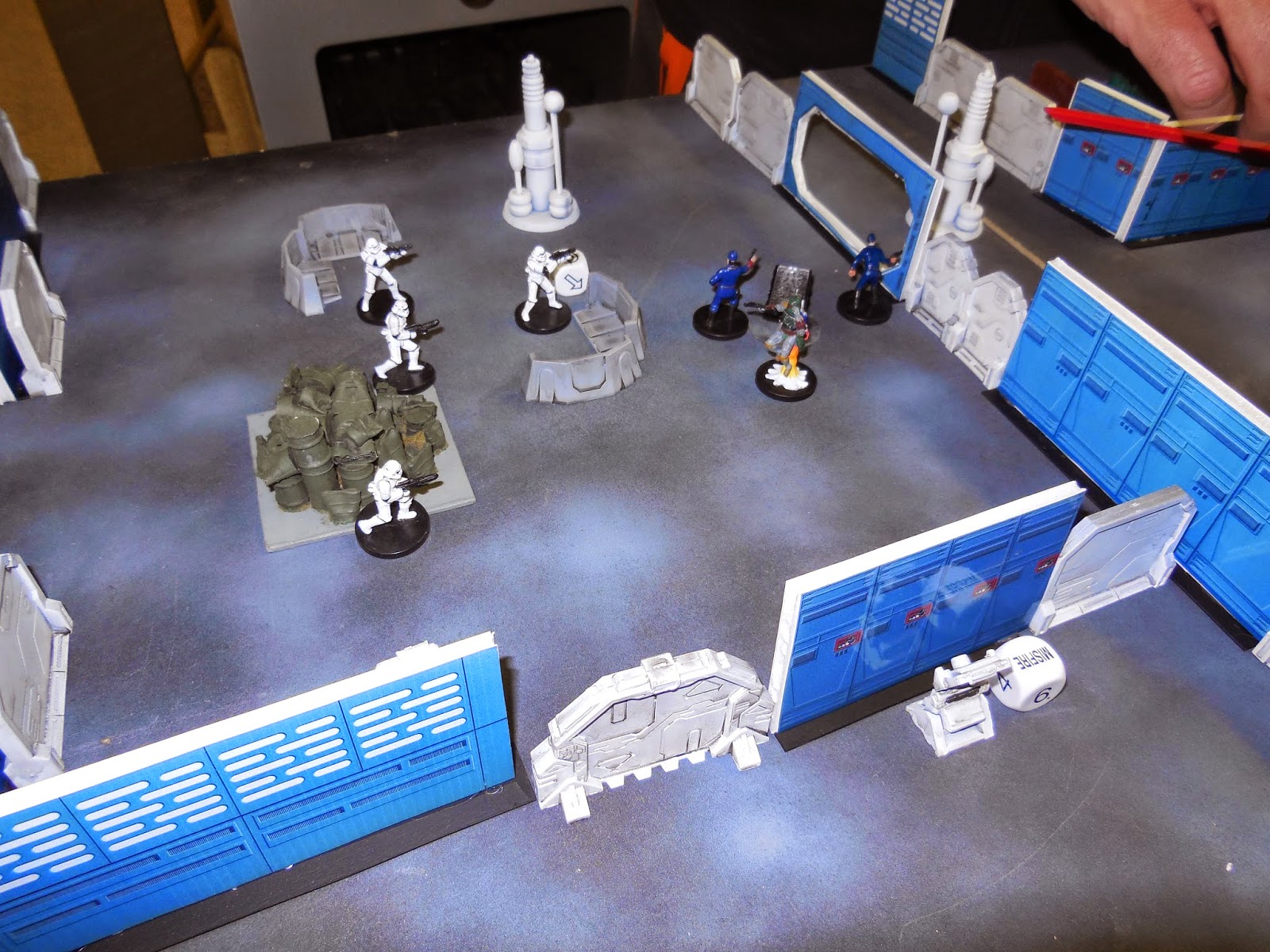 Fett and his Bespin Guard flunkies push frozen Han towards the docked ship. Stormtroopers take aim at the Rebels just out of shot. 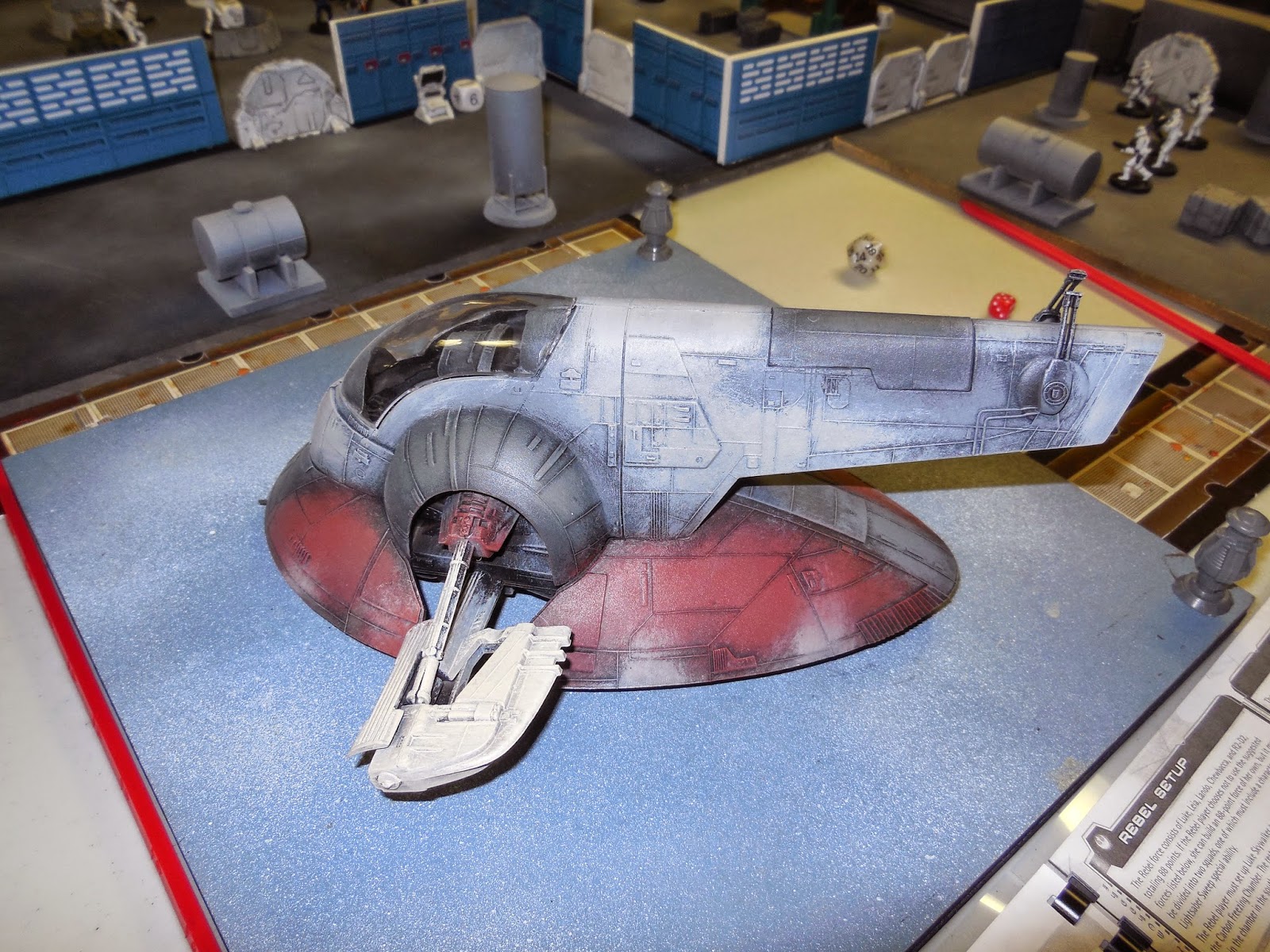 Slave I awaits, fuelled and ready to go. 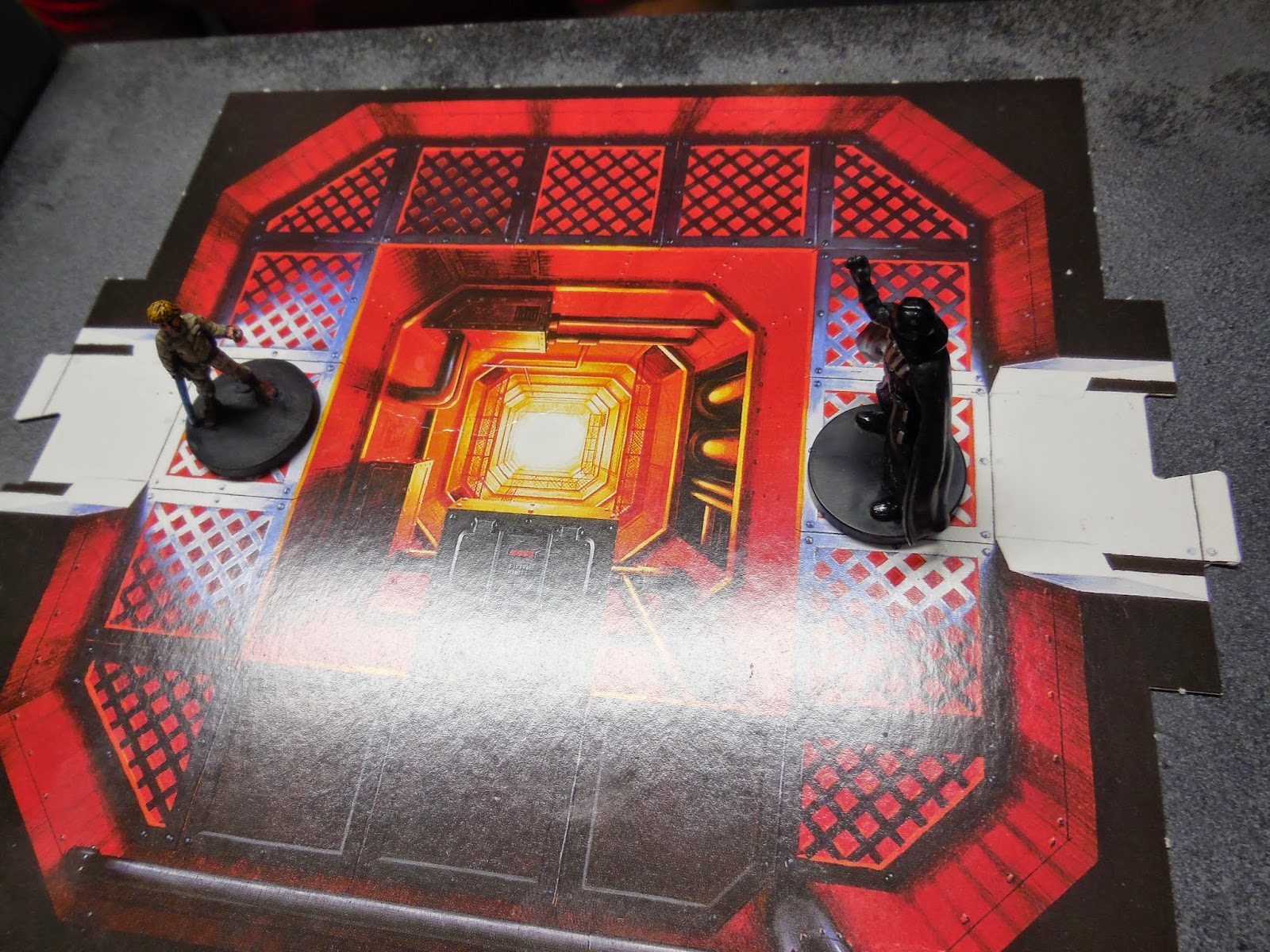 Vader leaps across the chamber and attacks... 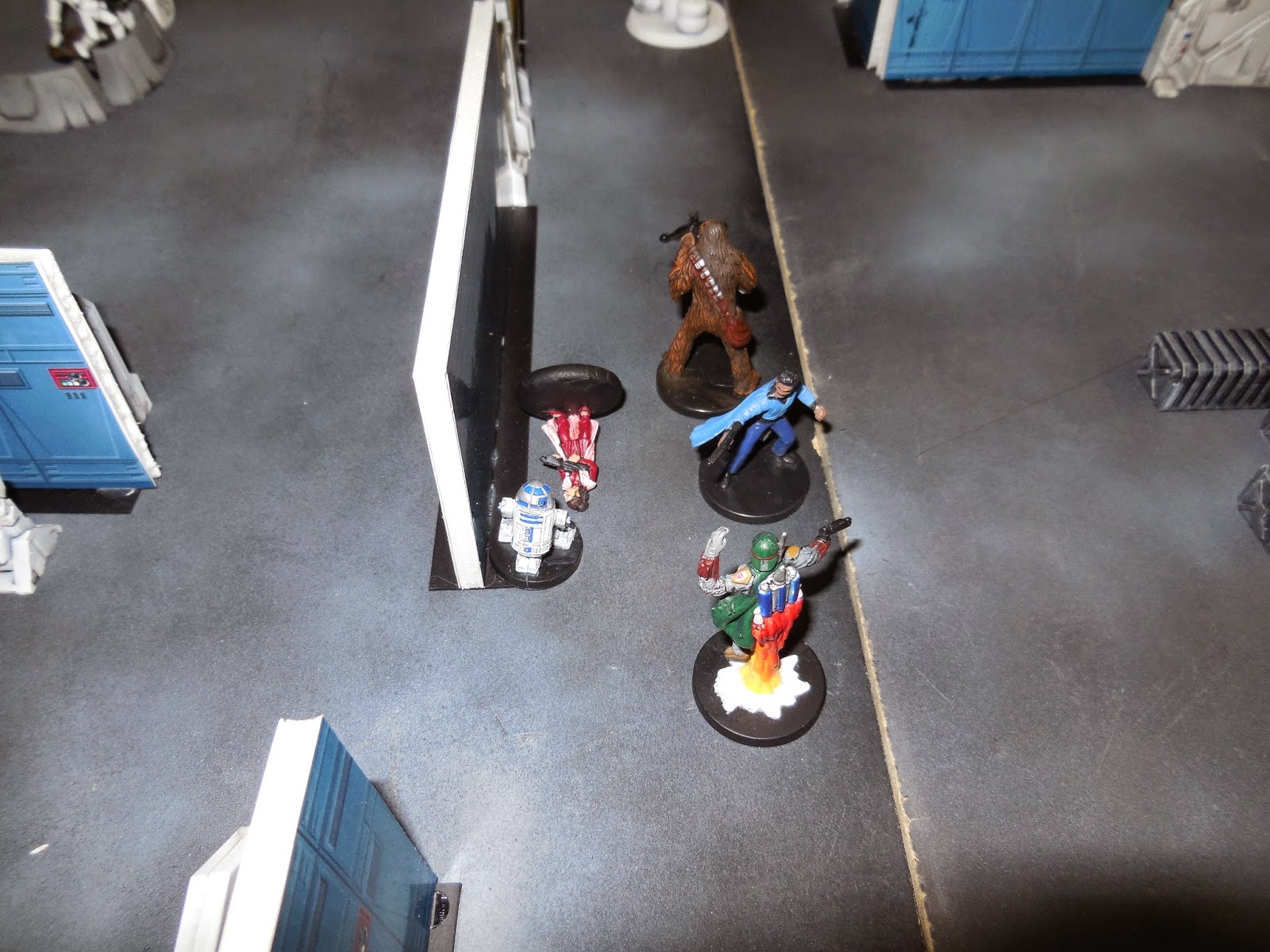 Meanwhile the fight is not going great for the Rebels. Leia's down and Fett's flunkies are halfway to the ship by now. The notoriously under-pointed Boba Fett takes the fight to the Rebels... 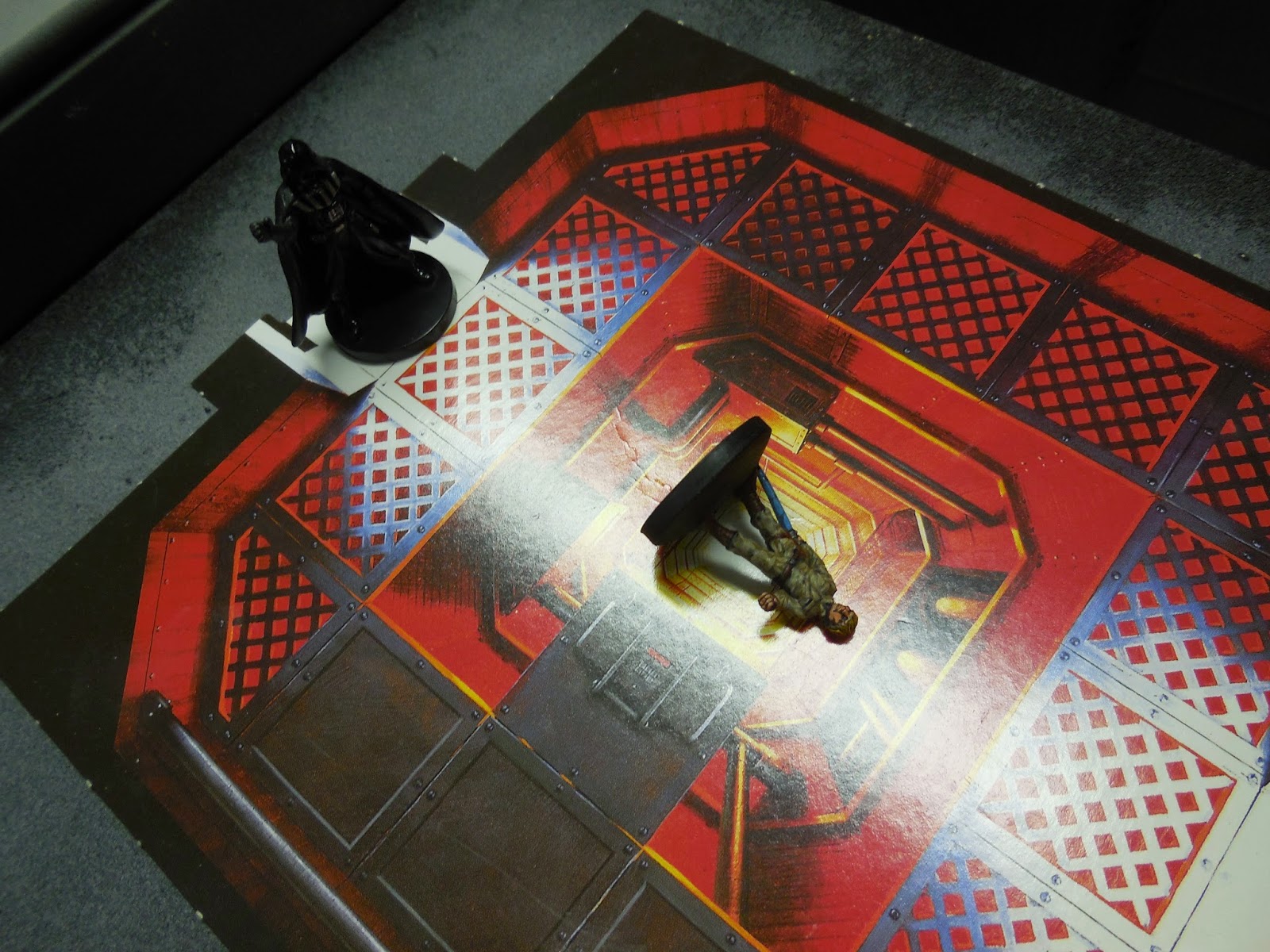 Back in the carbon freezing room, Vader has force-pushed Luke into the chamber. The scenario rules state that if there's a Rebel character in the freeze chamber and the only other characters in the room are Imperials, the Imperial activation can be used to "freeze" the Rebel character. "Too easy!" says Vader... as long as he activates on his next turn before Luke, the hapless farmboy will be a meat popsicle on his way to the Emperor faster than you can say "utini"! 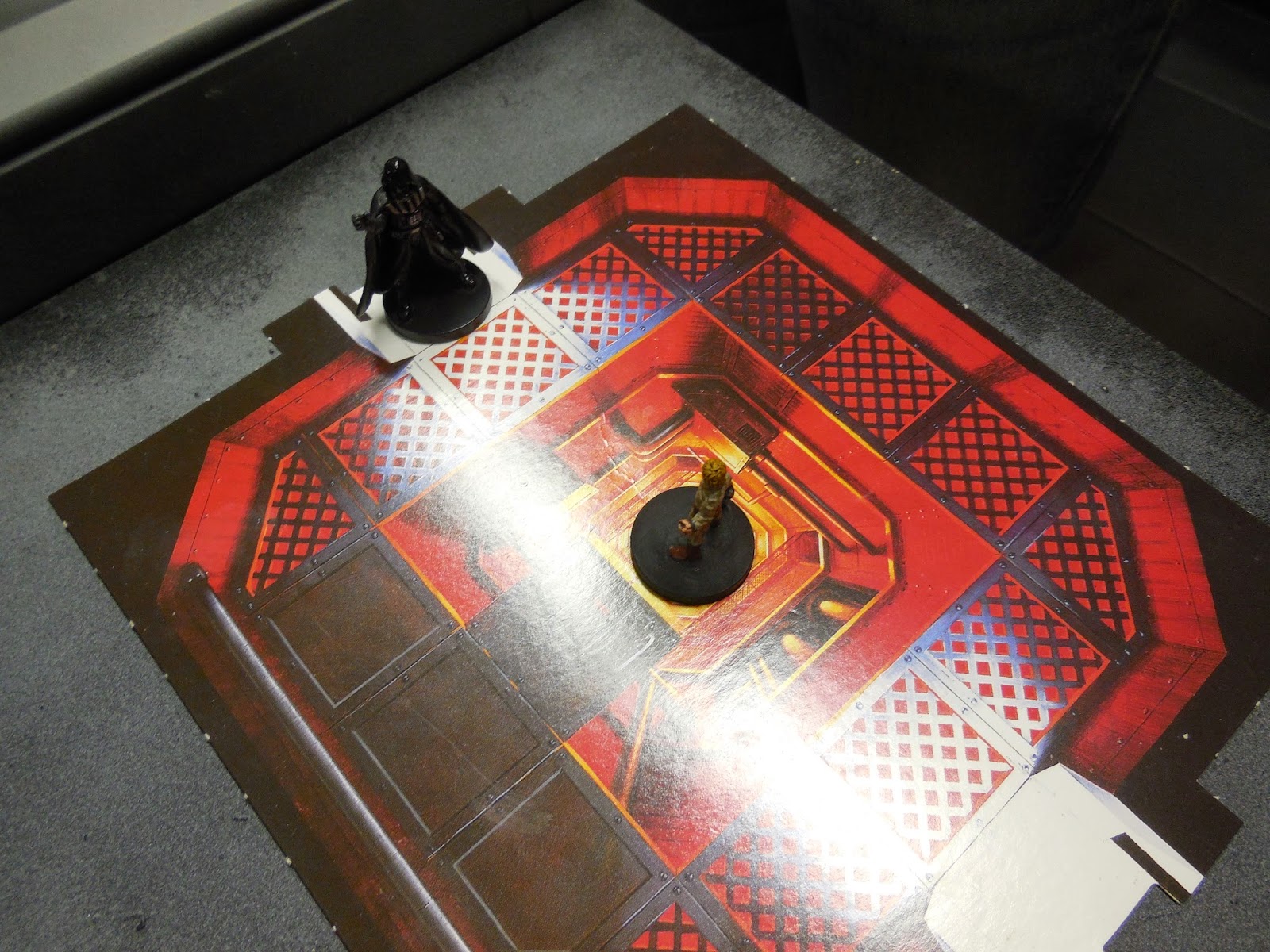 But the farmboy has advanced further in his Jedi training than the Sith Lord suspected! Luke won the die roll for initiative and activated before Vader, using his last Force Point to Force Leap out of the chamber!

Sadly it was all in vain as the merciless Dark Lord of the Sith overpowered the nascent Jedi, defeating him handily. 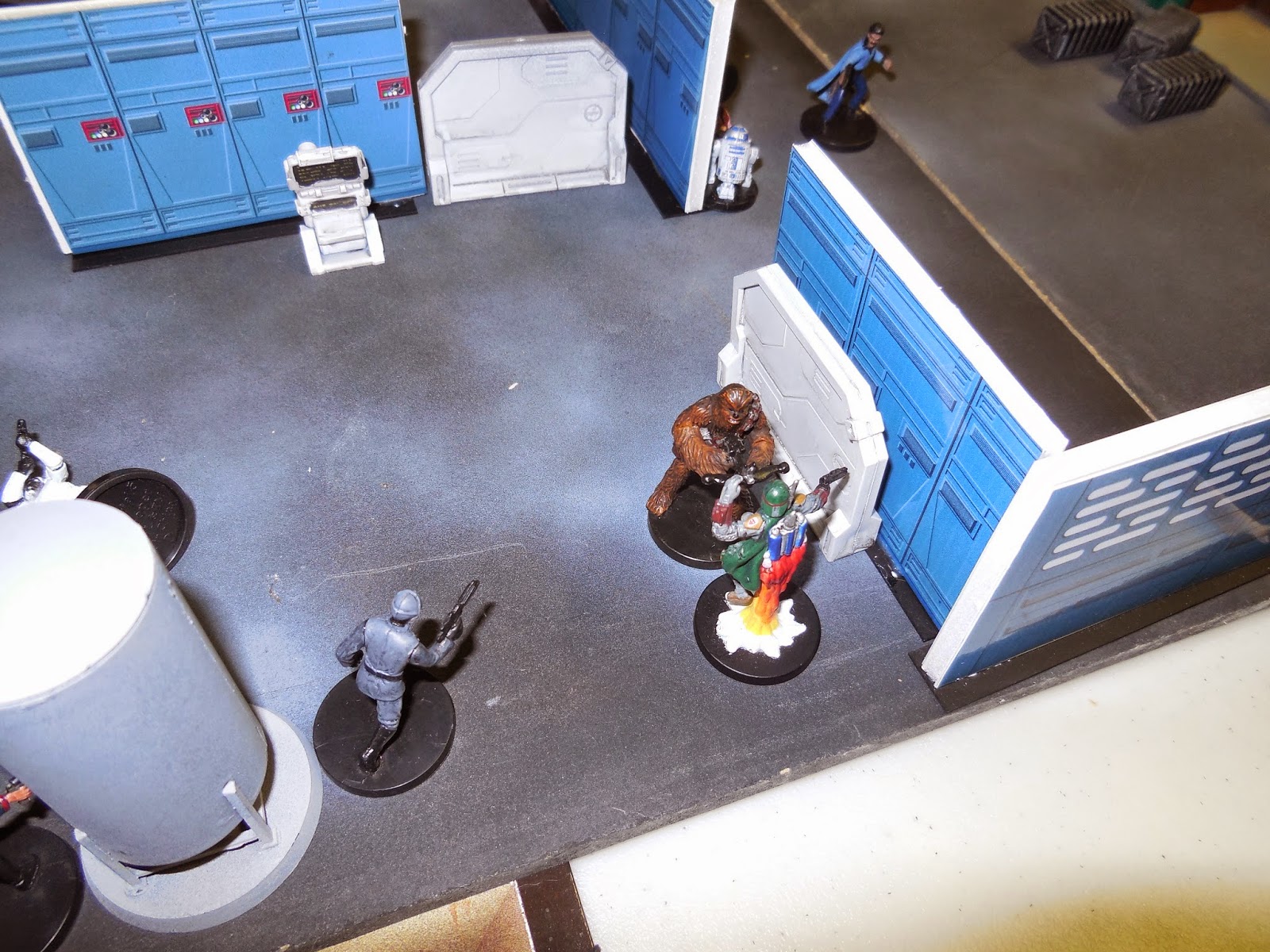 Screaming for vengeance after the Princess was defeated, Chewie charges in on Fett... 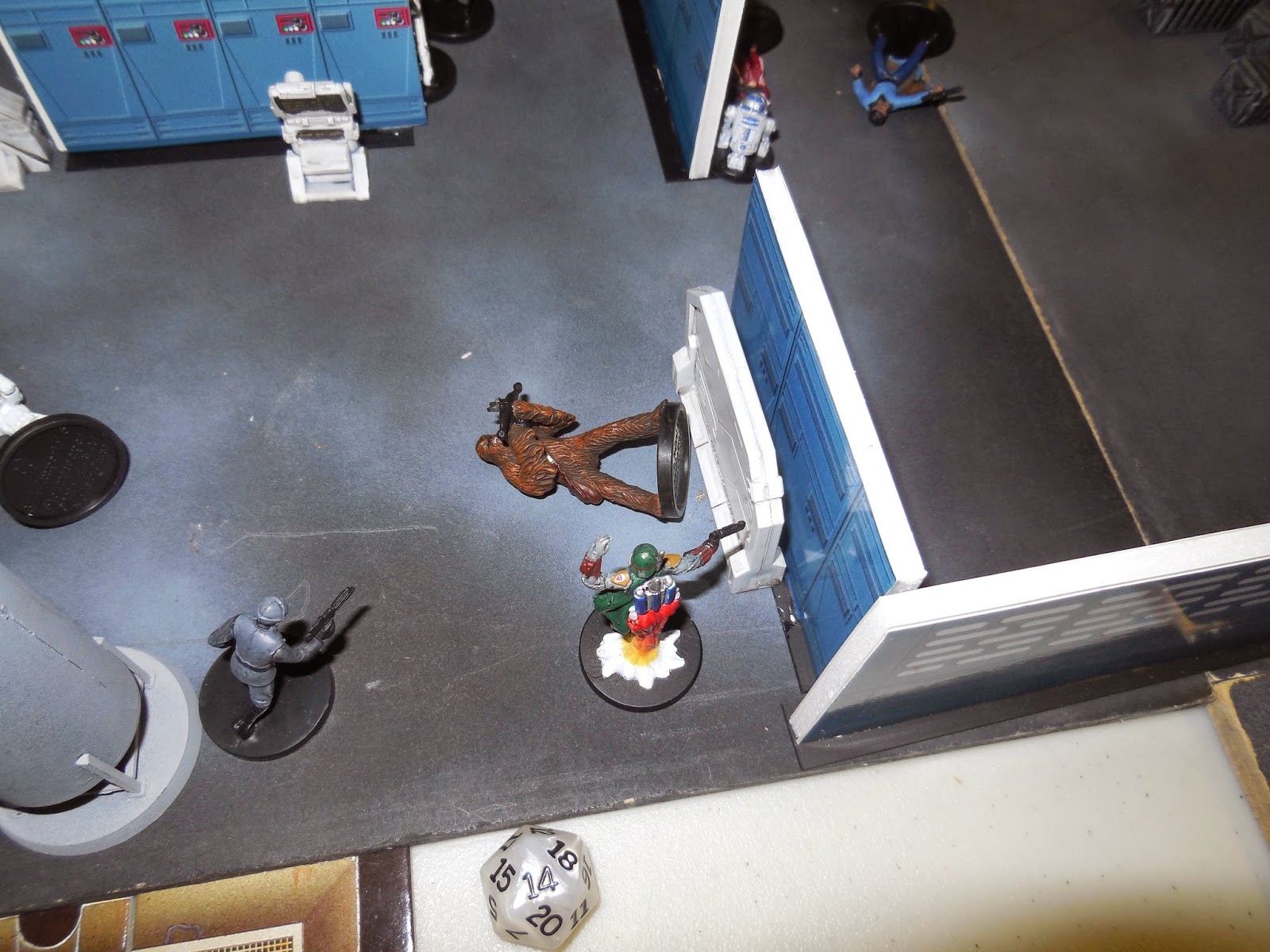 ...only to be shot down by the coldhearted bounty hunter!

Result: Imperial victory. The Rebels failed to free Solo and Luke was defeated by Vader. Even though Fett escaped with Solo, he didn't stop both the Rebels and Imperials from fulfilling their victory conditions, which was the only way the Fringe faction could win.

This was a fun game and very cinematic (especially the Luke vs Vader duel) but it wasn't really close in terms of victory. This is the fourth or fifth game we've played from the Ultimate Missions book and they've all seemed quite unbalanced - I wonder if they were playtested?? This game would've benefitted from one squad less for the Imperials and some different deployment. Admittedly the latter was kind of down to me as I set up "3D" terrain rather than use the supplied maps, but to me the aesthetic is pretty important. Anyway, we may play the next scenario (Rebel Escape/Luke vs Vader Part II) but if we do, I'll more carefully consider the opposing forces as well as the setup.
Posted by Dallas at 9:34 PM

This is great! I love the freeze-room.

Looks awesome, sorry I missed out!

Great looking game dude. Of course they are never play tested - that is what you are doing for them, right?

Yup, that was a very cinematic game!

The scenario itself could use a bit of tweaking though, as you say. The Imperial squads might be better at 3 Stormtroopers each, and one Officer overall. Then include the rule for additional Stormtroopers showing up on following turns.