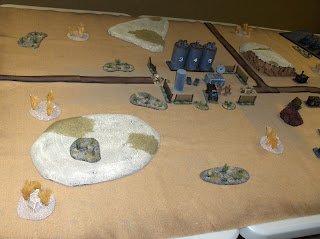 A couple weeks back we played an enjoyable game using our house rules, "Red Storm!", updated for use in a sci-fi setting. Greg brought out his awesome "Control Battalion" army and I used some new figures I had gotten from a German TMP member - some very nicely painted GZG NAC and APCs - along with a few I painted especially for the game. The action centred around a sludge production facility on (where else) Toxo IV.... 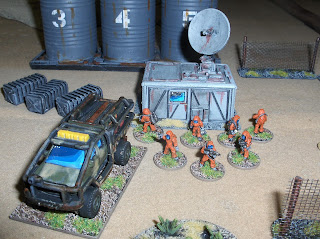 A team of NAC engineers started the game at the sludge plant. Their goal was to retrieve the production data slates and take them off board. I guess the wi-fi was down - but why would they have that giant dish??

The engineer figures are from Rebel Miniatures and their transport is actually a repainted Matchbox vehicle found at Wal-Mart :-) 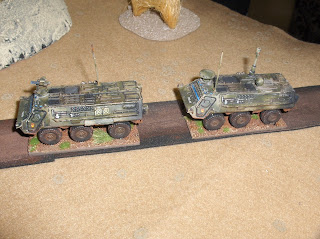 The rest of the NAC force arrived in transports (mildly converted 1/87 "Fuchs" APCs from Siku). Their goal was to protect the engineers from the approaching Control Battalion forces and facilitate their escape off-table. 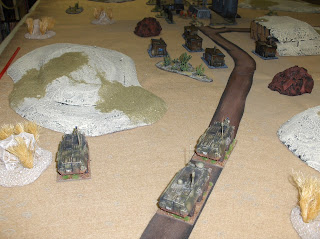 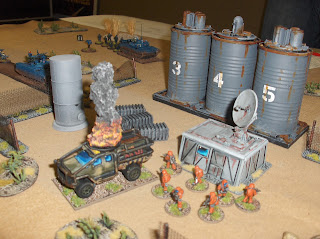 But Control Battalion has gotten there first! Cleverly, they fire on and destroy the engineers' transport. 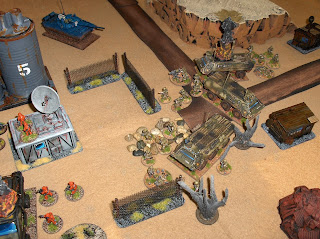 As the engineers scramble to retrieve the data slates, the supporting NAC force hurriedly deploys. A Control tank has just destroyed one of their transports. 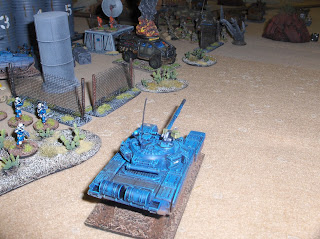 View from the Control side. Riflethings are taking cover in the cactus while their armour lights up the helpless softskin truck... 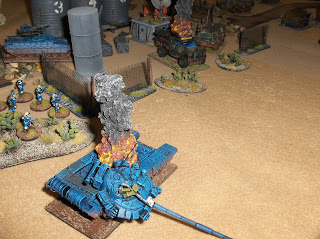 ... then blows sky high! What happened?? 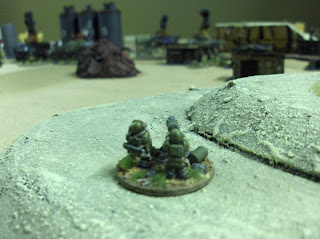 It was Brian's cleverly deployed NAC heavy weapons team. Brian turned out to be the star general of this game. After dropping off its section, his transport cruised around for a bit, then positioned itself to retrieve the retreating engineers and secure a NAC victory. But we're getting ahead of ourselves a bit... 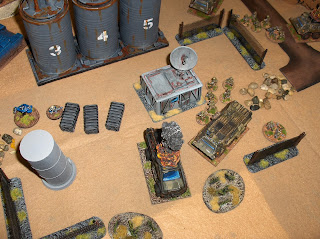 The situation at the sludge plant. Control has broken through the perimeter and the NAC tries desperately to stem the tide. The few surviving engineers are in full flight. 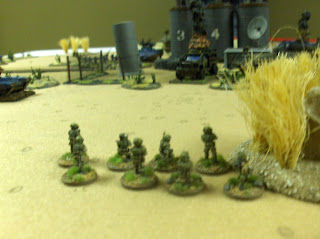 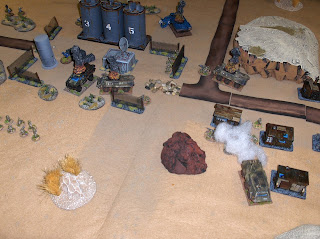 Endgame. Brian's APC has made its way to the ad-hoc rendezvous point to pick up the engineers and data slates. Control has been pinned in the middle due to some hot fire from NAC anti-tank weapons. 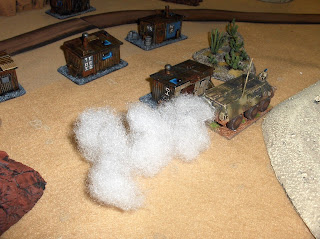 Quite a fun game - thanks to Greg for bringing his awesome Control guys and to the lads for coming out. I'm becoming more a convert to individually based 15mm figures with each game we play...
Posted by Dallas at 12:07 PM

Great AAR, beautifully painted miniatures, as always a joy to
be on Fawcett Avenue!