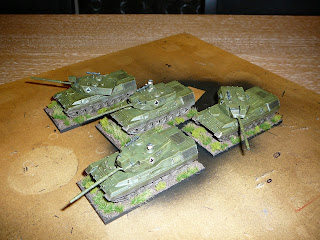 Shamed by Greg's rapid progress in a challenge I proposed, I buckled down and started painting. First completed are my troop of Leopard 1's. Used in the 80's until just recently, they were our best (and most economical) answer to vast swarms of Soviet armor. Note the large box on the front of the turret. This is a camera system used in the early 80's. I believe it was moved internally in later upgrades. These models are QRF. All in all not bad models. A few casting issues, but nothing I couldn't fix.

Next up are some infantry followed by the M113's. The majority of the infantry will have to wait until I get a replacement order from Peter Pig.
Posted by MFraser at 6:07 PM

Nice job on these tanks they look great. Look forward to seeing the infantry and M113's

Excellent work, Mike! I'd like to see some more pics of these. Those decals certainly finish the final product.

NICE!! Have you been using my Blog's rules for 15mm cold war by any chance?

@MWnciboo - we haven't played a game yet with these, but for 15mm Yom Kippur we have been using a modified form of Bolt Action.

Would love to see your rules, however!