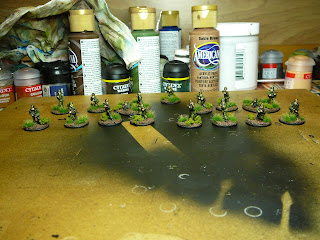 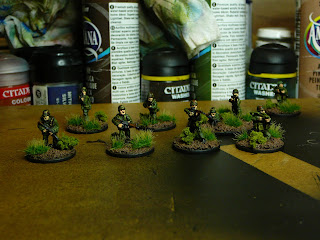 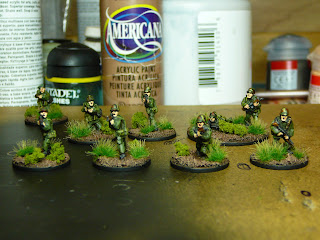 Here are some Canadian infantry for my 4CMBG force. Models are QRF West Germans with head swap from Peter Pig. The head swap was essential and I'm glad I took Greg's advice on the matter. The QRF infantry are definitely bottom rung, but the head swap makes them passable. Note the Carl Gustav models in each group. The one thing I'm intrigued by about the Canadians is just how poor some of their equipment was in the 80's. The Carl G being one example. There were better weapons than the Carl G at the time (milan for example), but the Carl G is what they got. With an effective AT range of 150m (from what I've read) it would have taken some sand to sit there while a T-72 was rolling towards you.
The rest of the infantry will have to wait until I get another batch of heads from Peter Pig. I was also going to post more pics of the Leopard's, but I realized I didn't paint the stowage tools. I'll see if I can get that done tonight and post some more pics.
Posted by MFraser at 10:11 AM

Looking good so far! I can't wait to see the complete force!!

Great work Mike. I'm glad the head swapping worked out for you. Those guys are beauties.

Good work - nice looking troops. I could tell you stories about the 80's.

What heads have you used from Heads and Odds range?

The Carl G man needs a number 2, hugging him up close. LOL.