Last Thursday the Conscripts gathered at my place for Greg's Epic 40K game entitled "Not an Ordinatus Day". It was an indeed an "epic" encounter, set in the time of the Horus Heresy, pitting massive titans of the loyalist Ordo Titanicus against their traitor brethren. 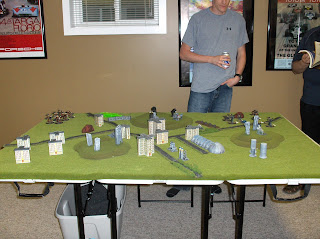 The battle took place in an unnamed Imperial city. The scenario was a straightforward one - as the title indicated, the Rebels had procured a fearsome "Ordinatus" weapon (basically a planet-killer gun on a massive tracked chassis) and were escorting it across the length of the table to its firing position. (For any Winnipeggers reading this, we imagined that the central road across the table was Pembina Highway and the Ordinatus had to get from downtown to Investors Group Field for a Bomber game)
The Loyalist forces were assigned three larger Titans and a couple small ones, and were tasked with preventing the Ordinatus (codenamed "The Compensator") from getting to the Bomber game. The Rebels had a small contingent of Titans escorting the Compensator. 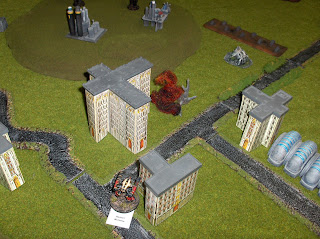 Joing the action already in progress, the Loyalists (bottom) have just vaped a Rebel titan, a lighter Scout model I think. 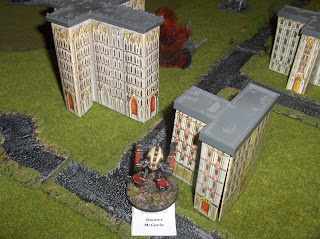 Another view of the Loyalist titan. Greg came up with some clever names for these imposing war machines ;-) 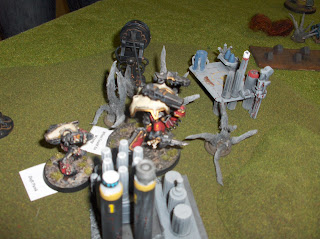 The Rebels light up some of the Loyalist fools on the hill. 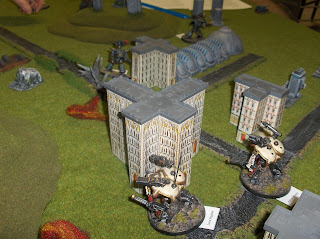 A strong Loyalist group reinforces the centre against the Rebels. Conscript Curt rolled the Compensator directly into action early on, and its fearsome weaponry destroyed at least one Loyalist Titan with a single shot. So the Compensator became a target of highest priority... 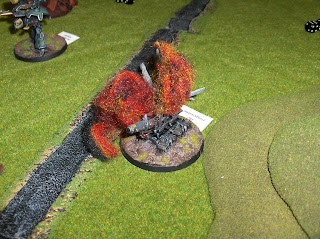 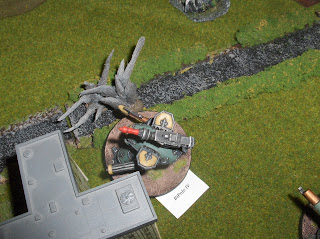 I didn't take the best pics of the game (perhaps Greg will add more?) but the Titans looked awesome prowling around the city. Those Imperial skyscraper models were among the best things GW ever included in its boxed games, for sure.
﻿ ﻿﻿﻿﻿﻿﻿
Excellent game as always put on by Greg. Epic 40K is such a good ruleset - consigned to GW's heap of history. Dulce et decorum est pro profectus mori. (Apologies to Wilfred Owen)
Posted by Dallas at 2:26 PM

It is sweet and proper to die for your what? I didn't catch that last bit.

Great game report by the way. I loved Epic and Adpetus Titanicus. One of the first wargames I ever played oh, 25 years ago now.

"It is sweet and proper to die for profits" - just my little dig at GW for killing Specialist Games ;-)

Good one Dal and great job Greg, I had a blast playing this.