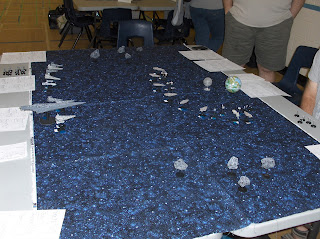 As previously reported, Conscript Greg and I ran games at PrairieCon XXXIV, held last week in beautiful Brandon, Manitoba, Canada. Greg brought out his excellent Tomorrow's War future skirmish game with a ton of terrain while I quite sensibly brought a few spaceships and a terrain mat for a Star Wars Starship Battles fleet-scale game. 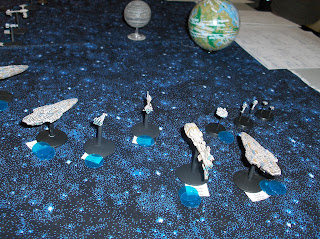 The scenario I had designed was based on the Battle of Endor at the end of "Return of the Jedi" - the rebel fleet comes out of hyperspace ready to attack the defenseless Death Star II, when all of a sudden the Imperial fleet heaves into view and Ackbar utters the immortal words: 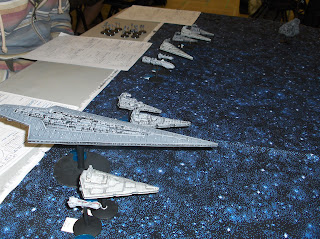 Yes, surrounded by the Imperial fleet (including a Super Star Destroyer on which the Rebels are repeatedly exhorted to concentrate their fire), the Rebels must hold out until Han Solo and his merry band can destroy the shield generator and allow the snub fighters to penetrate the space station. 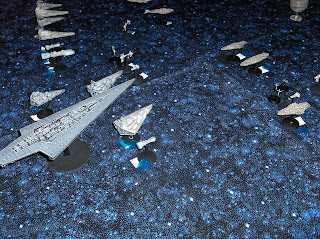 The Rebel fleet turns hard about to face the Imperials. Models are repainted/converted Micro Machines (Mon Cals and Victory/Interdictor Star Destroyers), Titanium-Series Star Destroyers, and resin confections from the excellent range produced by Odyssey Slipways. The one-piece resin SSD Executor is an eBay random, I think it was originally produced by a modelmaker in Brazil. Fighters are the "stringvest" models from the Star Ranger forums, now produced by Studio Bergstrom. 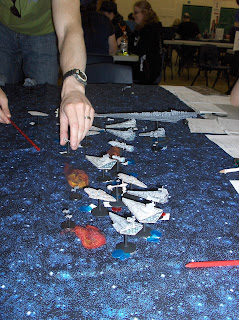 Ackbar orders the fleet to move in for close action. The Rebels split their force, with one half attempting to screen the other from the worst of the fighting. The idea was to buy time for Han and friends to deactivate the shield generator - this would happen on a random turn. If there were Rebel fighters left (and/or the Millennium Falcon) these would then have a chance to blow up the Death Star. 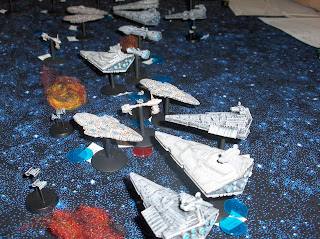 The Rebels really mixed it up with the Imperial fleet but it became clear that they would be overwhelmed... 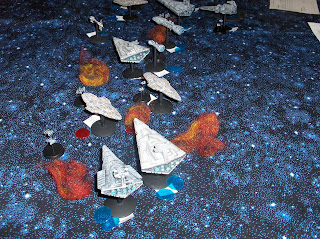 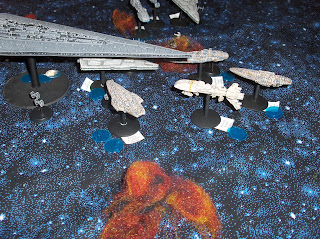 ...especially once the "fully operational" battle station started laying waste to the fleet with its superlaser! 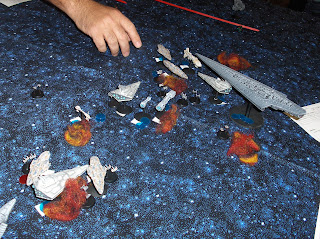 As the game wore on, the Headquarters Frigate finally got the signal that the shield was down - time for the fighters to move in! 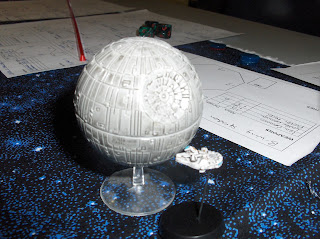 The Millennium Falcon had been lurking in proximity to the Death Star since the beginning of the game; here at last was a chance for Lando and Nien Nunb to prove their value to the Alliance. The Falcon took some damage from the Death Star's anti-fighter defences but was able to make it all the way to the reactor core and... 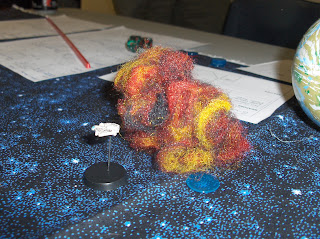 The Death Star went up with all hands on board (except Luke and his dad, naturally) and the Ewoks began to sing their song of victory:

Thanks to the guys (Greg, Mike F., Cam) for coming out to play, the other PrairieCon players who also played, and to PrairieCon for being, hands down, Brandon's best gaming convention for over 30 years ;-)
Posted by Dallas at 1:17 PM

Which reminds me of one of my favourite clips from Clerks:

Nice game man !
Can you tell me where do you find your starwas battleship ?
I'm searching som vessel like this for my BattleFlett Ghotic game. I'm preparing a cross-over and fight between those two univers.

Thank you for all.

My Victory-Class Star Destroyers and Mon Cal ships are old MicroMachines toys you can find on eBay. The Imperial SDs are old "Titanium" toys, and may be currently available in the Hot Wheels range from The Force Awakens. Other smaller ships are from Odyssey Slipways - you can Google them. The Executor/Super Star Destroyer is a random resin model I found on eBay, they pop up from time to time. Fighters are from Studio Bergstrom, also online. I hope this helps!

Thank you for your answer, with all this infrmation, i'm sure i'll find many vessel with good size. Because all ship need to be arround 3 to 10cm.
Now i need to find vessel and build rules for them. It'll be cool !!!

Thank you for all