After some prodding from Greg about posting, I thought I would post up some of the items I have been working on lately.

Here is my first Dystopian Wars fleet that I painted up in March on a whim.  I had this and another fleet sitting around for a while since I liked the look of the ships, but had never actually seen a game played.  I decided that it was time to unbox them, paint them, and get a game in, so here goes. 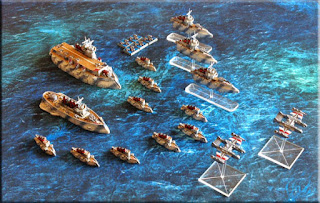 First off, the quality of the castings and resin that Spartan Games puts out is first class.  I was amazed at how little cleaning was required, with almost no mold lines on any of the ships, and better yet the crisp clean detail on the models is extremely impressive for the price of the starter fleets.  I wish I could get Forge World models even half this good, and Forge World is about 3x the price!

For those unfamiliar with Dystopian Wars is it a naval combat game set in an alternate Victorian Steam Punk universe based on ours in the year 1870.  Several of the dominant powers of that era are represented in the game.

The one I chose was the Republique of France (RoF), which is based on a France brought to great power under Napoleon. However that power was then lost after his death in 1804 and the country fell into chaos.  It has now been rebuilt by Louis-Napolen and is allied with the mighty Prussian Empire and controls most of Europe.

While the RoF is a small force, they are a highly trained elite fighting force with many innovative technologies that other countries do not yet posses.  These technologies include:

The Gravity Nullifaction Engine which allows several of their ships to lift out of the water and pass over other ships and terrain. Even the ships that do not have these engines are generally faster than other nations ships as the RoF focuses on speed and precision strikes.

Many ships also have built in cloud generators which make them harder to be hit by enemy attacks. Better yet they are often combined with retardant armour which allows them to ignore the first 6 rolled against them in each round of fire.

And lastly mighty Heat Lance which inflicts damage based on the size of the target, making it an extremely deadly weapon against large battleships and dreadnoughts.

In addition to all of the advanced technology that the RoF possesses, they also focus heavily on air superiority.  They have greater access to air craft and anti-air (ack ack) firepower than any other fleet in the game.

While the RoF has many upsides, it also has significant faults. The first being the lack of serious firepower when compared to almost any other fleet in the game.  A case in point is their battleship which only has 2 turrets, compare that to the British with 4 at roughly the same point cost.

The second fault in the fleet is the fragility of the fleet. The cloud generators and retardant armour help, but if caught in the cross hairs the ships fold up pretty fast.

The ships painted up amazingly fast.  They were simple models that I primed, airbrushed, applied basecoat, inked, and then picked out a few simple details.  I looked at picking out more detail on them, but thought that as soon as you do on such small models they start to look busier (and therefore potentially messier) than better.  Others may disagree, but that was my thought process on not adding more to them.

The one thing I did add detail and flare wise was the French flag on every ship.  While I would love to claim this idea as my own, it was “borrowed” from a painter on the Dystopian Wars forums.  In my opinion it really makes the ships pop, even the small ones with only a deck board of each of the three colours, but amazingly so on the carrier with the room to do a full flag.
I have more to expand as this is only the starter fleet with the addition of the carrier, but next to be painted is the British fleet (on my painting deck for May) so that I can host a Dystopian Wars battle one Thursday evening in June.
Posted by ByronM at 11:40 AM

Beautiful work Byron! I really like the tone of your deckwork and the flags do a great job of setting off the fleet as a whole. Perhaps I'll bring out one of my fleets next time I'm in town so we can have a mash-up.

Many great hobby projects start out on a whim!

Thanks for the compliments guys :-)

I finally got the rest of the French Fleet in too, so there is more to come, including the HUGE flying fortress. It's the size of two carriers side by side, can launch an amazing 9 stands of fighters or bombers, has tons of firepower, and oh yeah IT FLIES!

However, have to finish the British starter fleet first so that I have two forces for games.