A little bit of a "surprise" project that I wanted to get done before my friend Curt returns to Winnipeg for another visit, I present the 1st Cuirassiers, 28mm French Napoleonic Heavy Cavalry, 24 figures strong.  The figures are plastics from Perry Miniatures.  I finished up the unit during the long weekend here in Canada.  Overall it took me about three weeks.  I started these guys on May 2nd, the same night the Montreal Canadians opened their (ultimately ill-fated) quarter final round against the Ottawa Senators in the NHL playoffs.

I already have a small but gradually growing force of 28mm Austrians for the Napoleonic wars.  These have faced off a couple of times against Curt's French troops. And while I will continue to haul my sausage aficionados happily down the Trans-Canada Highway, I would like to have a few games for the group locally.  That means I need to get some French done of my own.

I had purchased a couple of boxes of these plastic French heavy cavalry back when the Perrys first released them.  That was a couple of years ago...2009, or 2010 or something like that.  So these have been sitting for quite a while.  I don't know what, precisely, prompted me to knock these off, but when Curt mentioned he might be popping by for a visit in June I thought to myself that it would be awesome to finish these off in time for his visit.


In many ways, starting off a French force with heavy cavalry is hugely illogical.  What I actually need to get on to the table is a couple of regiments of ligne, some artillery and other bits, not fancy armoured heavy horsemen.

But I have always been impressed with the look of the French heavies...some of the nicest troops of the whole period.  Gleaming breastplates, big horses, funky helmets, heavy swords...these guys have it all when it comes to looking cool.

I did not (and still don't) know a whole lot about them - other than to watch out when they charge - but the Perrys give you enough info with the box sets to encourage you to get started, so I dove in. I made several mistakes (like using the wrong horse halves for the officer, etc), but I figured "screw it" and these painted up relatively fast, as far as calvary go. 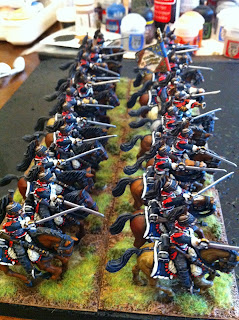 These plastics are really, really nice.  I am getting to be quite the curmudgeon when in comes to plastic figures - I dislike assembling them, and prefer the weight of the metal figures.  But the Perrys give you everything you would need with the box - you get the option to have them in a charging pose, or with the sabres at rest.  And you can do them as either Cuirassiers or later-look Carabiniers.  It's pretty awesome.
Painting the musician was particularly tricky.  The uniforms of the French musicians generally are quite mental compared to the humble garb of the Hapsburg drummers and buglers. 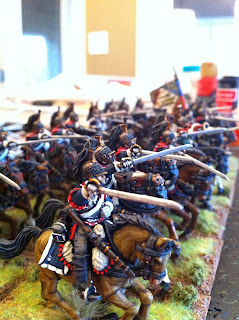 The flag is from the "Flag Dude".  I quite like the effect of his work, certainly a cooler "crinkle" in the flag than I could manage on my own.  But I find the wire he mounts his flags on pretty challenging to cut - I ended up using the Dremel tool, with plenty of sparks, because none of my cutters were up to the job.  Fortunately nobody was hurt.

As Curt might say, these fellows will be "a little lonely".  I think the Cuirassiers typically operated in divisions together, so having these guys all alone on the table would be a little odd.  That means a second unit at some point, as well as some specific heavy cavalry officers.  I won't lie - that will be quite a while away. I would prefer to use metals as opposed to the plastics (even these really nice ones) for a second regiment, and I don't have those handy.  But this was really fun, and I look forward to hopefully seeing these on the table, perhaps alongside Curt's French dragoons.
Posted by Greg B at 7:32 PM

stunning work what a fantastic looking unit. Thanks for sharing
Peace James

Aren't you the guy that just said a few weeks ago...

Regardless, they look very good Greg! Excellent use of a rainy long weekend!

Thanks a lot guys. Byron - yes, I do hate painting horses, but if I'm going to do them, I get them done in big batches like this :)

Large units of cavalry always bleep me off, since they make me loose interest quiet fast (I hate painting horses). So you have my respects for painting such a large unit so fast.

All that being said... I bought lots of plastic cavalry from the Perries when they released them, too. With a little metal help enough for all the French cavalry at Waterloo. PlusmI have all the British heavies in metal... What was I thinking! :-0

I have them in 6mm to do, but not yet

Wicked!! Brilliant work Greg. I love the mass of these guys. We'll definitely find a space for them for our donneybrook next month. Sound the charge!