Another entry for the Analogue Hobbies Painting Challenge - this is a pile o' Soviets, 15mm, a mix of Battlefront and Peter Pig Castings. 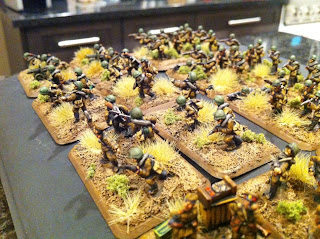 There is a group of Soviet "sappers" - five stands with four models each.  I'm not sure what makes them "sappers", but the models appear to have a mix of SMGs, charges, molotov cocktails, entrenching tools and a willingness to use them all at once.

There are a couple of Soviet HMG teams.  It is classic Battlefront - you literally order these things by the company, so I have a laughable amount of them.  Still, if you're the Soviet player, you will be happy.

There is a platoon of Peter Pig castings.  This is my first time working with their WW2 offerings, and I was impressed.

The Peter Pig castings are in my view superior to the offerings from Battlefront.  But the Battlefront castings retain a unique appeal of their own...right down to the frumpy faces.  I'm not sure what it is.  But they just seem...neat.

Battlefront also tends to give you literally everything you need in a box, so among this entry is the "staff team" from an artillery battery box.  The inclusion of very heavy artillery on the table in what is a tactical game is one of the many terrible features in the "Flames of War" game, but these were a gift, and I have to hand it to Battlefront, you really do get everything.

The little staff team is on a resin base that models all sorts of stuff, including a loose MG42 and a looted clock (!?!).  This was a lot of fun to paint, and will look good as an HQ stand in a Spearhead game.

I continue to be way behind the leaders in the painting challenge, but I am determined to cling to a Top 10 spot (a glamorous spin on "ninth place").  Stay tuned for more colonial stuff, and more 15mm WW2/
Posted by Greg B at 10:15 PM

Some really nice work here Greg, keep it up!

These look amazing, are you bringing them out to Legiocon?

Nice work thats a superb looking force. The bases really set them off.

Chris - our plan for Legiocon is to do a 28mm scale WW3 participation game - Soviets vs. NATO. Hope to see you there!