Last week the conscripts assembled at Dallas' place to play a Colonial game using the "Black Powder" rules.  I had tried Black Powder for the first time during my recent visit to Regina and was really impressed with the rules. I was hoping for a second successful run through with the group at our home base back in Winnipeg.
The scenario was a slight "what-if" type encounter, imagining a bold Madhist emir launching a probing attack against General Graham's force assembling at the port of Suakin in 1884. Irritated and keen to get into action, Graham sends a smaller force into a preliminary battle.
The table was 6' x 4'.  With the trusty Geo Hex terrain as a base, the setting included the ruins of a small trading station once run by the Egyptian administration in Sudan.  The British had to break the Madhists.  The Madhists had the same goal.  The break points were similar - first side to have half their units broken would lose.

The Madhists had three big warbands of warriors with spears, a unit of cavalry with spears and carbines, a unit of camel scouts with carbines and two groups of skirmishers with captured Remington breech loaders.  They also had a captured Krupp gun crewed by Egyptian "volunteers".
This was only my second game of Black Powder, and the first game with the group here in Winnipeg, so I'm pretty sure I messed up a couple of rules.  But overall it was a great game.  Dallas, Frederick and Dave V. played the British side while Mike F, Kevin H. and Perry played the Madhists.
Black Powder moves very fast.  Because command success can vary, some units can cover quite a bit of distance if you give a bold order and roll well (or with luck - whatever :). The Madhists roared forward into the approaching British lines.  The Brits responded with crashing volleys from their Martini-Henrys and counter charges from the 10th Hussars.
The Hussars caused some dramatic damage on the Madhists on the British left, but ultimately they took a lot of punishment broke after a couple of turns. On the British right the Highlanders withstood charge after charge, breaking a couple of Madhist warbands but they were ultimately overwhelmed by the combination of cavalry and irritating Madhist skirmishers!
As the Madhist units wore away, the British tried to stick grimly to their battle lines, hoping to settle the matter with musketry.  But Mike F in particular was hot rolling the morale saves.  The finish was very close - with the Hussars and Highlanders gone, the British were one unit away from breaking.  On the other hand, so were the Madhists!  Who would claim glory in the Sudan?
As with all such systems, there was heartbreak in the command rolls for both sides.  The Madhists could not quite finish the job, but they came close. Command rolls played a part.  The British firing line won in the end, but just barely.  It was very, very close, a great game by both sides.

Dallas brought out the movement trays for "War of the Ring" and they worked well for the British.  I look forward to getting my own sabot-trays for these figures and playing more Black Powder in the future.

I really enjoy Black Powder.  The rules are very quick, simple and very flexible.  They certainly have a lot of similarities to Warmaster, but they are adjusted very nicely to get this style of game. The guys seemed pretty engaged with them.  As I said above, it was only my second run through so I probably screwed up a few calls but overall I think we had the spirit of the game.

As you can see from the pictures, photos of the British are lacking - I am hoping Dallas will upload some he took when he has a moment.  In the meantime, you can get a look at a similar game from Regina here.
*********

Thanks for posting the report, Greg! I've uploaded the pics I took of the game with some captions... 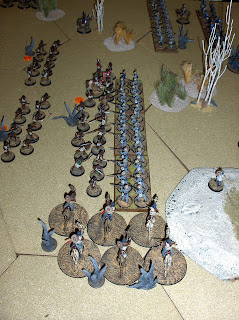 You put on a great game, Greg. A real 'nail biter', not to mention a little frustrating for the British with Mike F successfully saving 90% of the wounds we inflicted. It was driving me a little insane. [Sorry about that. It happens sometimes. I just have to up the meds.] I have ordered a set of the "Black Powder" rules, which are on sale until 28 February. It has inspired me to get back to my 2nd Afghan War project.

Greg, thanks again for a great evening!

When the Highlanders broke (after defeating both an enemy cavalry unit and a sword armed mob in close combat), I thought we Brits were done for...especially when the naval Gatling gun jammed.

Gotta love a game won on the final throw of the dice.

Vitai Lampada
("They Pass On The Torch of Life")

There's a breathless hush in the Close to-night --
Ten to make and the match to win --
A bumping pitch and a blinding light,
An hour to play and the last man in.
And it's not for the sake of a ribboned coat,
Or the selfish hope of a season's fame,
But his Captain's hand on his shoulder smote --
'Play up! play up! and play the game!'

The sand of the desert is sodden red, --
Red with the wreck of a square that broke; --
The Gatling's jammed and the Colonel dead,
And the regiment blind with dust and smoke.
The river of death has brimmed his banks,
And England's far, and Honour a name,
But the voice of a schoolboy rallies the ranks:
'Play up! play up! and play the game!'

This is the word that year by year,
While in her place the School is set,
Every one of her sons must hear,
And none that hears it dare forget.
This they all with a joyful mind
Bear through life like a torch in flame,
And falling fling to the host behind --
'Play up! play up! and play the game!'

WoW! Great photos & AAR! I may have to bust out my Sudan or Afghan stuff and give it a try. Those LOTR movement trays looked like they worked out just fine!