As I prepare to get creamed in yet another Analogue Hobbies painting challenge I have been trying to use the pre-contest "warm up" period to get a bunch of models primed and organized so I can paint faster once the competition is actually on. "Organized" is a loos concept with my rambling approach to the hobby, and attempts to organize often lead to me stumbling across a long-forgotten project.

The 28mm Sudan collection from the Perrys is a stunning (just like all of their other stuff) and I have a good chunk already painted - about 60 Madhist warriors and 30 various British troops. The British and Madhists have clashed a few times here in Winnipeg over the years with the Fawcett group, and they have even seen action as far afield as Regina! It is one of my favourite collections, and the games are always entertaining.  We play skirmish-style games, as opposed to the big set-piece engagements like El-Teb or Abu Klea (although I painted these before an easy system like Black Powder came out, so you never know - I might re-base at some point...)

It has been years - specifically, at least four years, maybe five (?) - since I have painted any new models from this collection. So when I stumbled across a pile of models in a state of near-assembly while doing my competition preparation, I figured it would be a good time to add to the group. Specifically I am hoping to add some cavalry.  I have about a dozen mounted Baggara tribesmen and some troops from the 10th Hussars. I also still have more metal Madhist foot warriors, and a fun little set where a Krupp gun is being crewed by Egyptian prisoners with "encouragement" from a Madhist overseer.  All of these would add a fun new twist to a skirmish in Sudan.

All of these models have been sitting partially assembled in a box for years. It would be great to get these models done, and Curt's competition is a good excuse.

It has been so long since I have painted any of these models that I could not remember the colours I used.  So that calls for test models, and some guessing.  The photos in this post are the results of the experiments this weekend. 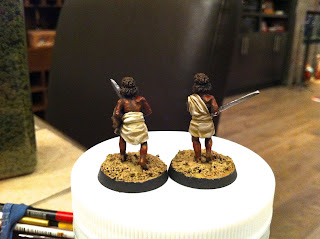 The foot warriors are pretty straight forward, but I haven't been able to find any sources that speak to the colours worn by the Baggara horsemen.  What colour were the robes? The straps? I don't know, so I just guessed with this guy.  Who wouldn't want to wear a nice blue sash when hunting down your colonial oppressors?

But if anyone has any tips or leads on the proper dress for the Madhist cavalry, please share...

Other bits I am hoping to paint in the challenge? Some 15mm WW2 Russians and Germans.  Some 28mm Austrian Napoleonics.  Some 28mm WW2 Germans.  And I have more 15mm Syrian and Israeli stuff for the Golan Heights lined up too.  Curt has asked us all to set a "par", and I set mine a little higher than last year, but we'll see how things go.  Those guys overseas paint at a fearsome rate, with great results.  If I can squeeze out a top ten finish I will be thrilled.
Posted by Greg B at 8:47 PM

Those look brilliant Greg! You'll have to bring them out here for another game in the New Year - they were a hoot to play with.

They do look nice, I like the shading on the white of their loincloth. (Is it a loincloth??)
I've just spent 4 nights at work, where I'd usually have around 18-20 hours worth of painting time twiddling my fingers, saving all the painting until the 20th! That Curts got a lot to answer for!!!!