Continuing with the Syrian build up I have a couple of posts featuring some more vehicles.  Up first, a platoon of three T-62s from QRF.  My first platoon of T-62s were Old Glory models, and I wasn't crazy about them, so I was hoping to see an improvement with QRF.  At the same time, my history with QRF products is mixed, so I wasn't sure what to expect. 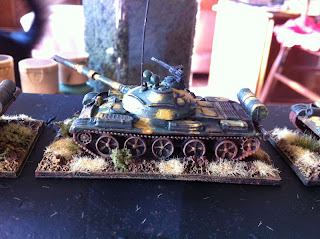 The QRF T-62 models were a significant improvement on the Old Glory castings.  The turret looks much more accurate.  The treads/wheels look a lot nicer.  The models come with a cupola MG (something that I find really "makes" the look on Soviet MBTs) and an unditching beam (again, another standby for Soviet tanks).  Overall the detail was much stronger on these than on the Old Glory tanks - and much better than the metal turd plops which were allegedly crew for the QRF 100mm AT gun. 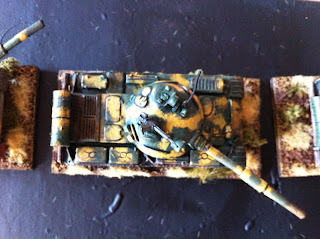 These tanks received the standard Syrian treatment (it's getting to be an assembly line now) and are mounted on bases from Litko.  I continue to struggle with the Arabic numerals, but it's close enough for me. 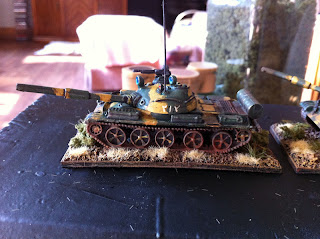 These casting still have a lot of issues - the cupola MGs were very poor, thin castings. There were a number of flaws and flash tags on the treads and road wheels.  The mould lines on the turrets and main gun were particularly marked, and required a lot of work.  None of these issues were critical, but they bug me because you never see a lack of quality like this from the likes of Eureka, Khurasan, Old Crow etc. The contrast between this reality and the love-carpet-bombing QRF receives on TMP really bugs me. 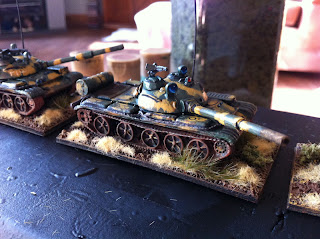 But QRF deserves credit for the wide range of its offerings.  At least they sell at T-62! And it is still markedly nicer than the competition - so watch for more QRF T-62s appearing in this blog in the future. 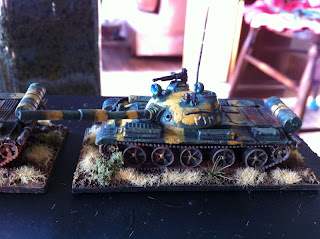