Here are a few more pics of the some 15mm "Federal" sci-fi troops from Khurasan. My apologies for the photo quality - the iPhone camera sucks (or I'm a terrible photographer, but I prefer to blame the camera for now).  There are two more heavy weapon teams - another 20mm SHMG team and a heavy AT launcher team - and a sniper/marksman.
I love the Federal AT launcher - looks like a sci-fi hybrid of a recoilless (sp?) rifle and a TOW-type ATGM. 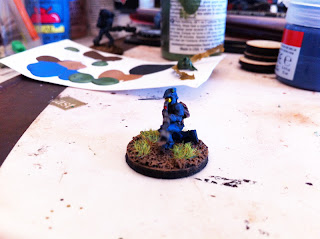 The sniper/marksman has a very long-barrelled rifle.  I am now realizing I should have mounted him on a larger base, maybe with some rubble/cover...popping him out and on to another base might be a project for the weekend.
Posted by Greg B at 9:57 AM

Very cool! What size bases are you mounting these guys on?

these are beautiful, love the vibrancy, what colours did you use if you don't mind telling?

These are beautiful, love the vibrancy, what colours did you use if you don't mind telling?

Thanks guys.
@ David - I start with a base of black. GW Regal Blue is the base coat. GW Enchanted Blue is the first highlight. I do a second highlight with a cheap craft paint called Dutch Blue. I then hit the model with the GW Badab Black wash.