Over the weekend I was fortunate to have the opportunity to zip down to Regina for a visit with "Fawcett Founding Father" Curt C. In addition to putting up with me spongeing his Coke Zero supply and playing Rainbow Six on his TV until three in the morning, we ran a colonial game using my 28mm Perry Twins collection. Here is a quick report, and some photos from the game.


The scenario was set in noth-east Sudan, in the earlier period of the conflict, in which the British were building up a force to protect the port of Suakin. It featured a heliograph team, holed up in an abandoned village, which had been merrily transmitting signals, much to the chagrin of local Mahdist warriors, concered at what the Frankish invaders were doing with the sun. A detachment of naval troops, backed by a Gatling and a Gardner Gun, set up a defence in the village, while a relief force of Yorks and Lancs and Gordon Highlanders tried to arrive before the tribal warriors overran the outpost.

The Mahdists had approximately 100 warrior, armed with a mix of swords, spears and captured rifles, and a group of six camel riders. They also had the Imam, which other Fawcett gamers will recall has the creepy effect of ensuring the warriors keep fighting through wounds that might otherwise have been fatal. Also, there was a provision that the Mahdists could "regenerate" in the sense that if one group of warriors broke, another similar one would re-appear at the board edge.

The British in the village had approx. 14 naval ratings, a gatling gun, and a gardner gun. Heavy firepower, but the village was pretty large and there were a lot of walls to defend so it was a challenge to cover them all. The relief column had a group of 14 Yorks and Lancs, a group of 12 Cameron Highlanders, and a 7-pound screw gun for artillery support, together with associated officers, pipers etc.

Curt and Dean took command of the Mahdist horde. Dan and Stacey split the British command, with Stacey attempting to hold the village, and Dan marching to the rescue.

The game was a hoot - Stacey was alarmed to see the Mahdists, rather than charge into the mouth of the repeating guns, make an attack that swept around the flanks of the village. Ultimately, the Mahdists would congregate in an area where the British had poor visibility, and then swarm the wall. Natually, the gatling jammed at a critical moment, while the Gardner failed to hit anything! Poor Stacey had an off night for rolling overall, while the tribesman were rolling vegas. The only exception was a Naval Lieutenant, who was gunnig for a Victoria Cross holding off several warriors, and even a mounted Khalifa, single-handedly for several turns. As the game developed, this award would be received posthumously...

Eventually, the village was overrun, with Curt's Khalifa surivivng two grisly rifle wounds, fighting his way over the wall, killing the Gardner Gun crew, dismounting, and fighting his way upstairs into a house, killing off the naval ratings, and finally beginning to "take care" of the heliograph team. He was helped along the way by some rock-hard Imam saving throws (see below). God is great!

Meanwhile, Dan was doing his best to march across the sands to help. The royal artillery put round after round into the cloud of tribesmen who were attempting to block the relief force, but the warriors kept coming. The dreaded camel warriors hit the Highlanders pretty hard, and it looked like curtains for them as the kilted gentlemen started to fall beneath the hooves of the smelly beats, but Dan pulled it out int the end, rolling hot to push them back, slaughter the remaining infantry, and continue the advance after blowing away the surviving camels with a couple of volleys from Martini-Henry rifles. One plucky Highland NCO even defeated the last camel in single combat!

As Dan rolled across the seemingly endless table (eight feet, to be exact!), Curt's rifle-armed warriors sniped away. In a bold move, Dan sent his mounted officer in a race ahead to try and get into the village early and help the hapless sailors with the close fighting. The Mahdists are terrrible shots, but Curt's shooters hurt the British captain badly, so even though he made it to the village, all he got for his trouble was a spear in the gut. This was the "TSN turning point" of the game. Even though the Sudanese riflemen ultimately got killed by a combination of rifle fire and further attention from the Royal Artillery, by weakening the mounted captain, they effectively sealed the fate of the British defences in the village.

All around, a tremendously fun game. It came once again to the final turn - in the end, only three members of the heliograph team had been killed, while the Yorks and Lancs were preparing to vault into the village in the face of a storm of spears. Technically, the British "won", but certainly the Gav Thorpe moral victory goes to the Mahdists! Thanks to Curt for hosting, and for the Regina crew for coming out and playing a great game.

Pictures below, courtesy of Curt! 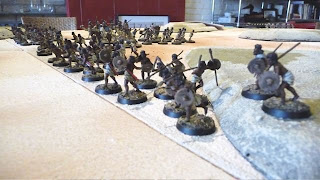 Mahdist warriors sweep across the desert to drive out the foreigners! 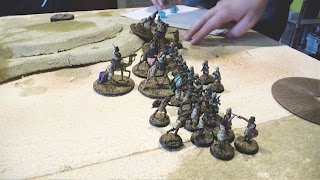 The Highlanders confront the Mahdist "camelry". 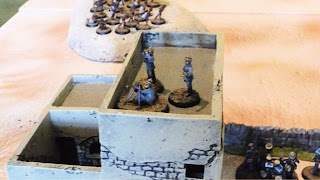 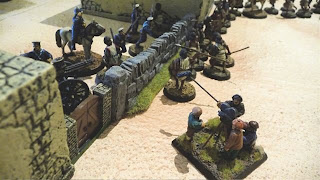 A film crew captures the action at the wall. Long-time Fawcett gamers will catch the reference! 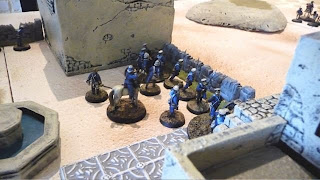 The naval ratings prepare to defend the village. 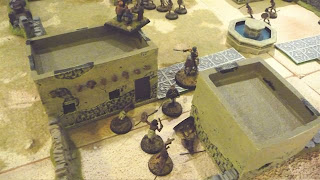 The young naval Lieutenant earning his Victoria Cross. It would be awarded posthumously. 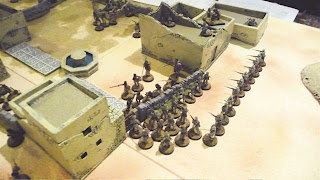 The relief force crashes into the wall of the village. Note the building in the corner, where the Mahdists have started to finish off the heliograph team. 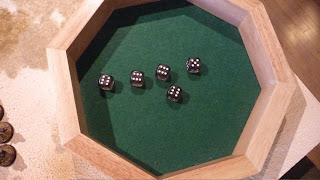 Curt captured a photo of the vegas rolling by the Mahdist side. Rolls like this had the Mahdist warriors ignoring wounds from rifles, repeating guns, high-explosive and other modern arms.
Posted by Greg B at 10:27 AM

It was a great game. Thanks for putting it on for us, Greg! The stellar moment for me what when Sgt. Haggis McBaggis (Dan) single handedly dispatched a camel while attempting to redeploy himself to a better position (like Glasgow). "Oooh, loook, I kin' see yer boney camel-toe." (followed by a savage swing with a weighted sporan...)

I also like the photo of the "Vegas" style dice rolling.