The Battle at the Farm... a legendary encounter! The first-ever scenario from back in the days of Rogue Trader - pitting Pedro Kantor and the survivors of the Crimson Fist chapter against Thrugg Bullneck, Sergeant Hruk, and their Space Ork warband in a scrap over a ruined farmhouse.

While we had played the scenario a few years ago using the original rules for the 25th anniversary of Rogue Trader, we wanted to try it again for the 30th anniversary and our inaugural battle report with the new 8th edition rules... 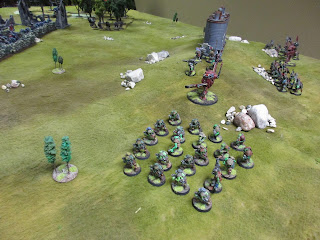 So we set up the game with the original terrain layout, but updated armies. On the Ork side, a 55 power level army - from bottom to top in the photo above: a 20-Ork unit of Boyz and Warboss Hruk, a Deff Dread, a unit of five Tankbustas, a unit of ten Stormboyz, a unit of ten Boyz, two Skorchas, and Thrugg himself, a Warboss in Mega-Armour. 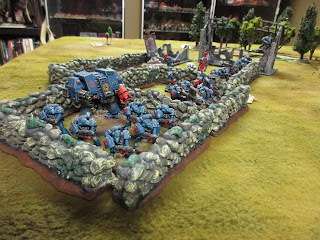 On the Space Marine side, also 55 power levels in play: two tactical squads of ten Marines each, a Dreadnought, a unit of five Scouts, an Imperial Space Marine (the awesome "LE02" limited edition model from last year), an Ancient standard bearer, an Apothecary, a Librarian, and Pedro Kantor himself. 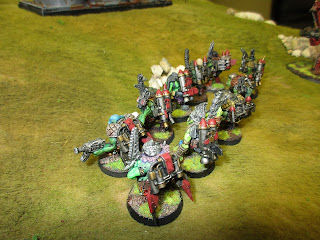 (All of the Orks are Rogue-Trader-era metal models and the Crimson Fists tactical squads are all RTB-01 "Beakies", befitting the scenario. The Stormboyz have been kitted out with jump-packs from the newer plastic kit). 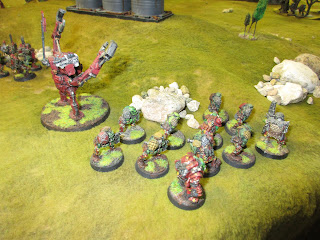 The Stormboyz, a Deff Dread, and Thrugg's mob of boyz deployed in cover behind Bultha's ridge. "Hruk, you take da big mob straight for da farm. I'll meet yer at da farmhouse," Thrugg ordered. "Sneaky," he thought to himself. "If Hruk makes it, it's coz he killed all da humies in da way. An' if he don't, then his share of da loot is mine!" 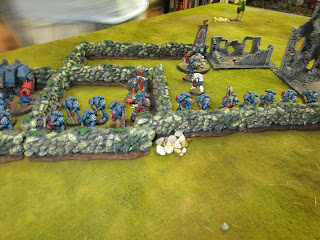 The humie gunline was indeed impressive though. Boltguns remain Rapid Fire in 8th and spit out a considerable weight of fire (2 shots per model up to 12"). Plus now, units can split fire freely, so the squad's missile launcher can shoot at the Deff Dread while the bolters shoot at boyz! 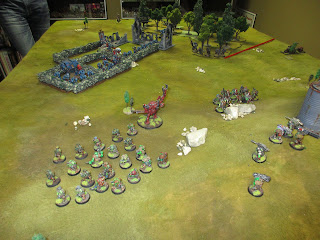 Da big mob advances. Ork gunz are mostly Assault, so Orks can Advance (regular move  +d6") and still shoot, albeit at -1 to hit. As their Ballistic Skill is already 5+ this reduces the expected number of hits by half... 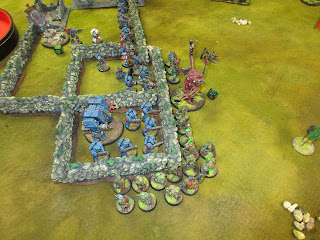 As Thrugg sneaks around the Rise out of shot, the mob crashes into the wall of Marines. Defending an obstacle in 8th does not give much of a bonus, however - it only really means that models within 2" (not 1") of an enemy can fight. Charging models still fight first and that's what the boyz are good at! 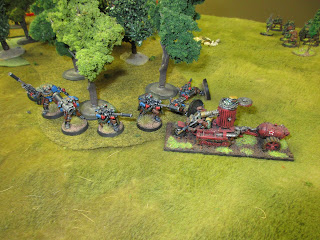 Meanwhile one of the Skorchas used its special ability to outflank, and deployed on the Ork right table edge. It flamed out one of the Scouts and then charged into close combat. Yes, vehicles fight in close combat now - and the Skorcha was quite handy with a WS of 3+ and four attacks! 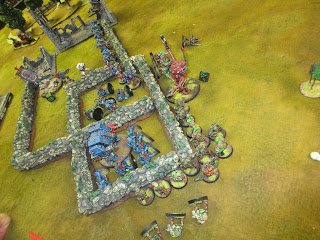 Back in the main fight things were going south for the Fists as Greg was plagued by some bad dice. The Orks were grinding away, assisted by Hruk who was pretty good himself. The Deff Dread acquitted itself well too, dispatching Marines with its mighty Klaw. 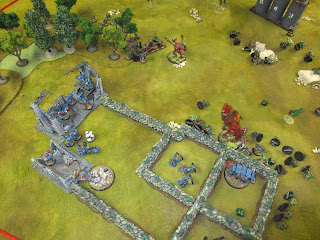 Things were looking promising as the Skorcha ground its way through the Scouts and their fey capes (!) while the second Deff Dread stomped over to finish the job. Thrugg and retinue can just be seen in the trees at top. 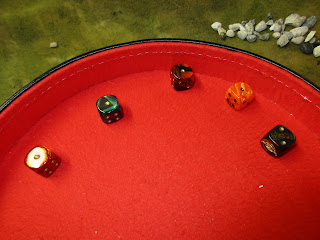 As noted, Greg's dice were appalling throughout most of the evening - here's the result of some Marines attempting a 2+ saving throw against Ork shooting. (Yes, the power armour save is still 3+ but instead of providing its own cover save, cover now adds 1 to a model's regular save. This is useful as "AP" now merely subtracts from the target's save rather than negates it altogether) 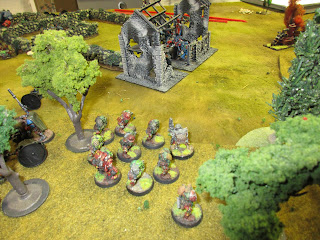 Thrugg can almost taste the loot as he and his retinue approach the farmhouse from the flank. Notably, difficult terrain no longer slows models' regular movement, but does subtract 2" from their Charge move. 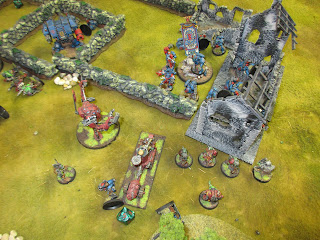 After having several Boyz peeled off by Marine shooting the scene is set for the final showdown. Pretty much all that's left of the Fists are their characters and Dreadnought, but there's not many Orks left either. Everybody goes crashing into combat but Thrugg, who rolled snake-eyes on his Charge roll. So he's a spectator in the first round. 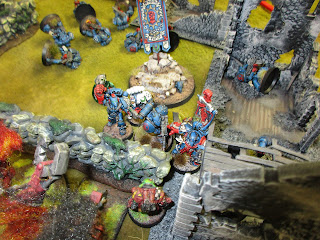 Things don't go so well for Team Green and it's up to Thrugg to salvage pride by taking out the hated Captain Kantor... 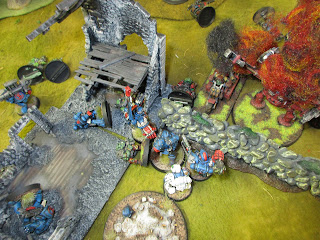 ...which he does not... Kantor's spiffy wargear is too much for Thrugg, who whiffed his attacks. You don't often get a second chance against Space Marines and this time was no exception, Thrugg taking it on the chin. 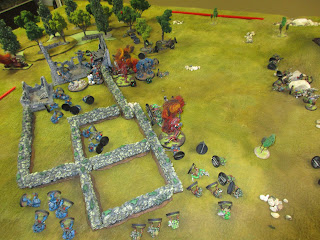 A pretty bloody battle all around, which is just the way we like it. No survivors on the Ork side and only a handful of Space Marines left to try and relieve the holdout defenders of New Rynn City.

So that's 8th edition! Verdict... we like it. To be precise, big thumbs up for:

Enthusiasm was tempered for:
We're not keen at all on:
Looking forward to another game next week where I expect we'll try some vehicle house rules just as a bit of a tweak. Stay tuned!
Posted by Dallas at 5:32 PM

That was a super-fun game, and a perfect ending, with hardly any survivors! There is something about these Orks vs Marines encounters set on Ryan's World that still fires the nostalgia, even all these later and using a different edition. Was also great to get the RT era figures on the tables.

What a cracking idea.... retro and new all at the same time ;) Great figures and looks like a great game was had! I mostly agree with your likes and dislikes, but overall really like the change to the new edition.

Interesting. Did you find gameplay was faster? Great combo of old and new!

Great write up and fantastic models. I've not played 40k in about 25 years but keen to return to it again. Fancy I'll run this scenario using the RT rules and some mk 6s and space orks that'll sadly have to be eBay jobs.

Why not give the scenario another bash using the original forces but with 8th rules? Would it play so badly?

Thanks for the comments lads! Ragsta - yes, I reckon the 8th ed game does play faster, not leastwise because there's no more trying to remember all the universal special rules. They're all on the unit cards now and that helps a lot. Mutl3y - we'd considered using the original forces but with only 15 Space Marines and Pedro, we thought it would be a pretty short game ;-)