Another week has past, and with it some additional submissions to Curt's Analogue Hobbies Painting Challenge.  After a super slow week last week due to being sick, I had a whole pile of things ready to go live, so even though it was one week, I had 3 submissions.

This entry was a whole bunch of random small scale items.

Having done WW1 in 28mm over the last few years, I started reading more and more of the history around the whole war.  The naval aspect of the war caught my fancy and I thought, why not do some ships to have some small games at some point.  After all, you don't need that many ships, and how hard could they be to paint? 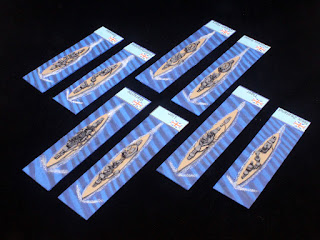 Well, the answer to that last part is, very hard if the sculpts are not great.  I got my ships from Mick Yarrow Miniatures after searching around for a while, they had decent reviews online and they were cheap so I figured why not.  Well, they are cheap, but the quality is pretty horrible.  They must be using molds made around the same time these ships were really sailing!  Some were concave, some had bubbles, some were missing guns, some were 2-3mm thick and others were 7-10mm thick, making them all very inconsistent.  They were CHEAP though, so I guess I should have known. 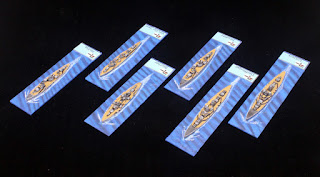 Thanks to Greg, I got corrupted and dragged along with the Epic 30k madness that he has descended into.  Luckily, I have only gone partially insane as I am sticking to one single faction and a small force of them at that. 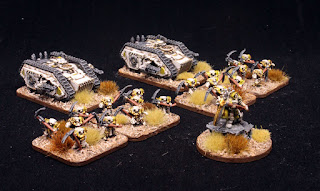 
I have been working on both Russian and American forces to do Team Yankee in 6mm, but basing them on a desert conflict so that I can use them for a cold war gone hot like Team Yankee or for theoretical or real gulf war games.  Anyway, I have most of the forces done already, but needed some additional infantry, so banged off another unit of American infantry and their transports, which have to be one of the ugliest transports ever invented. 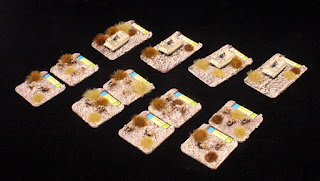 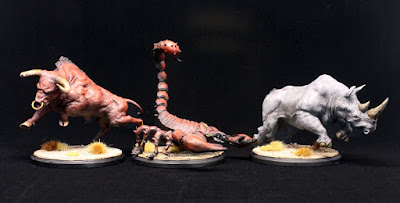 My friend Steve picked up a new game a little while back, and after seeing the quality of the figs I just had to get some to paint up.  That game is Arena Rex, a 35mm skirmish Fantasy Gladiator game. The figures are just stunning up close, the detail is amazing.  The only down side, the price is stunning as well! 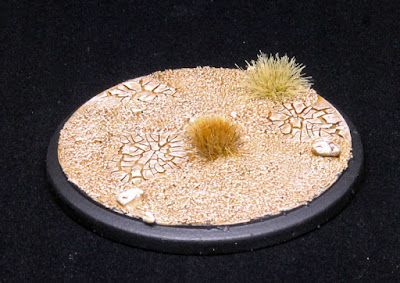 The rules are available for free though, and I tried a game with some proxy figured with Steve before I ordered my own.  It is one of those rare games that looks super simplistic at first glance, but has an amazing amount of depth hidden in it.  It has strategy, tactics, resource management, and more all rolled up in to what seems at first glance a simplistic smash-up gladiator game. 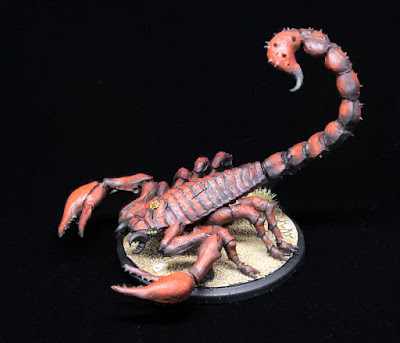 I wanted to really sell the Arena setting of the figures, but also make them usable for other things, so... I picture that arena with a sand based floor I wanted to do something sand based.  However, not wanting something as mundane as simple flat sand, I decided to try some cracked earth effects in parts of the base.  I picture this as areas where the arena got wet from blood, thrown beverages from hecklers, or hell where a horse or bull took a leak, and now the sand and mud has dried and cracked.  I also added just a few tufts of dead grass to the base to add a bit more interest.  Again, probably not seen in a lot of arenas, but if you picture a weekend circus and then time passing before the next big event it is possible that some small tufts find a way to grow. especially around the dried cracked mud that has extra nutrients added.  That's my story anyway, I don't care if you buy it, I can live with it. 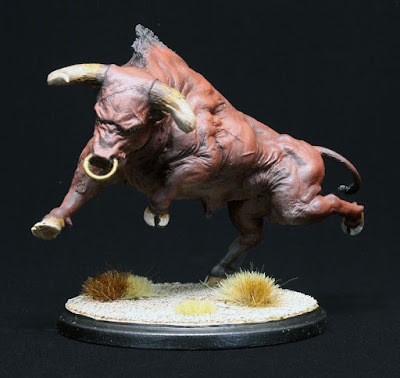 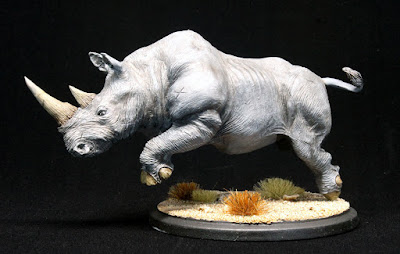 Onto the beasts themselves, I did almost everything with my new toy (a Harder & Steenback Infinity CRplus 0.15mm airbrush, which is AMAZING to work with!).  The beasts were done with black primer, then white or grey zenithal highlights and then many thin layers of glazes for colours.  I know Greg's eye is twitching over all that, but it really was simple and fast.  WAY faster than trying to get the same results with a brush.  I honestly believe that the Scorpion was done (primer - clear coat) in less than an hour of work time, and by brush I know I would have spent 4-6 hours to get the same effect.

Last up for the week was three teams of French Napoleonic Artillery all done on some huge diorama-like stands (60mm wide x 120mm deep). 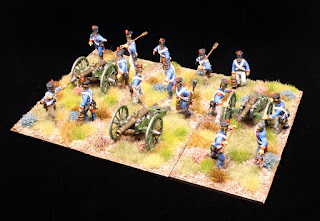 Four years ago now, I started doing some French Napoleonic figures as a promise to Curt that I would at least try doing something historical for my first painting challenge.  It was a unit of Perry line infantry, and my first exposure to painting the madness that is Napoleonic uniforms! UGGG! 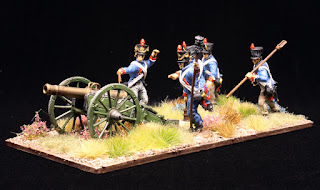 Four years later I finally have enough done to think about some small games!  Something Greg and I will have to arrange sometime soon for the group. 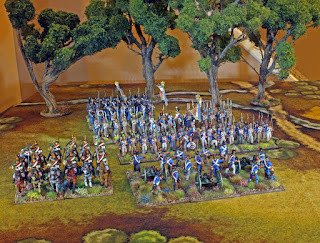 Having completed some pretty big projects in the challenge lately, I am pretty tapped out, and will not have much ready to go live this coming week, so I may not have another update here for a few weeks (other than the theme week entry).

You've put together some stunning entries so far Byron, the basing on those beasties is just superb - brilliant work Sir.

Great brushwork Byron (air and otherwise) - some fantastic stuff there.

We should look at a Black Powder game to beat up those French...

Thanks guys. Everyone seems to like the scorpion best and says it looks real, yet I strayed the furthest from real on it. Oh well! I still like it too.

As for the French, SURE Greg!

I believe I will need some command stands for Black Powder though, correct? If so, how many and with what on them? I assume just a few guys on each on a round base to represent command? Let me know and I will get a few done in the next few weeks so that we can arrange a battle.

Byron - Black Powder (and other games, I'm sure) do require some representation of officers. Generally one base to represent the overall force commander (these can be very elaborate if you are looking to represent a senior officer) and lets say two other bases to represent officers below the boss. Sometimes it is fun to do a single mounted courier as well, to represent orders traveling on the table, but that is not a requirement of Black Powder.

Maybe I can crank off a French battalion too just to bolster the lines a bit...lemme check...

Ok, I will get a few bases like that done shortly, and let you know when they are done.

And "crank off" and "French battalion" are terms that don't go well together! Those guys are HARD to paint! At least for me! That's why they take so long for me, I can paint 1 with all the fiddly details no problem. The second takes a bit longer, the third a bit longer and a bit sloppier, and by #10 in line, I probably "stay in the lines" 50/50 and take 4x longer than #1....