Lately, I've found that the way for me to actually complete a project is to ensure that it is small in scope, and then to stick with it until it's done!

Back in January, after some idle chit-chat amongst the Conscripts, several of us thought it would be great to start up a campaign for Necromunda, that long out-of-print sci-fi skirmish game from Games Workshop (set in the dystopic Warhammer 40K universe). As it turned out, several Conscripts still owned either painted gangs, or owned the parts to make them. I did not, so I went onto eBay and found a gang of 5 pristine (i.e., never cleaned up or painted) 28mm scale, pewter Spyre Hunters. 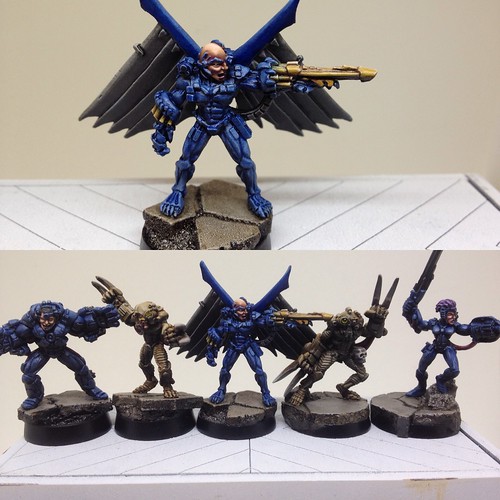 The fluff behind the Spyrers is interesting. Within the industrial underhives of a far-future hive city, where the gangs of the ruling houses compete for resources, the upper nobility also commit their own groups of "gangs" to the conflicts for a different purpose. Spyrer hunting parties are composed of the unproven youths of the noble houses, born in the upper levels of the hive. These groups descend into the lower levels to undertake a vow that has been impressed upon them by a sponsor, either to survive unaided in the depths of the undercity for a designated length of time, or to obtain a designated number of kills. They are not permitted to return until their task is complete. In this way the nobles will prove themselves as both ruthless and resourceful, and thus suited for political leadership roles.

Each Spyrer is granted a unique Hunting Rig which has been crafted off-world, using nearly forgotten technologies. A Hunting Rig acts as a suit of armour with built-in weaponry and cybernetic enhancements. It is self-sustaining, providing sustenance to the wearer so that they are not burdened by the requirement of food. It is also self-repairing, so that they do not require regular maintenance.
However the most important feature of the hunting rig is their power boosting system. As the wearer fights and gains experience in combat, the hunting rig will adapt and evolve to suit the wearer by increasing power to certain systems, unlocking previously unavailable abilities and new potential as the hunt continues. The Hunting Rig classes:

I cleaned up the figures with files, including sharpening the Jakara's sword, in the middle below. Most sword blades on 28mm models look like chunks of wooden 2x4. I pinned the figures with brass wire to neat-looking cast resin bases from Dragon Forge. 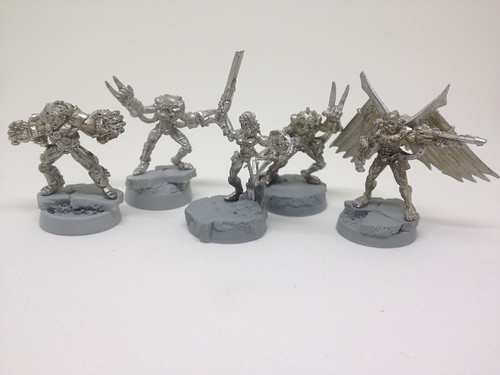 I started with my usual zenithal highlighting, priming black and airbrushing white downward at  about a 60-degree angle (thanks go to the late Shep Paine for that trick). The faces were initially laid in with Vallejo acrylics, using their great Face Painting Set. The paints provided allow you to do highlights, shadows, and to bring out the colour in the cheeks and lips, for various types of skin tones. 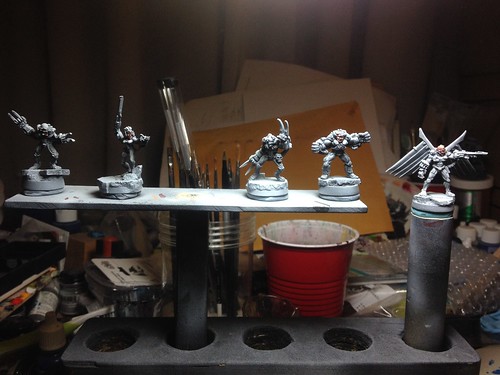 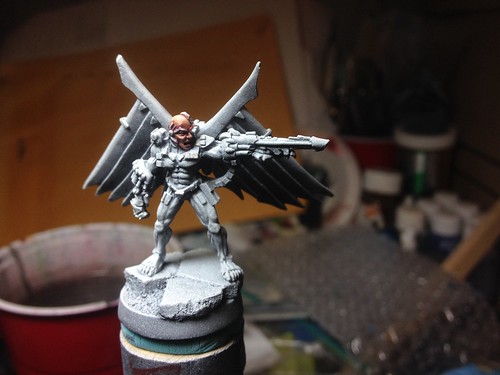 Afterwards, I went back in with artists' oils, to smooth out colour transitions, to punch up highlights and shadows, and to add detail in and around the eyes. 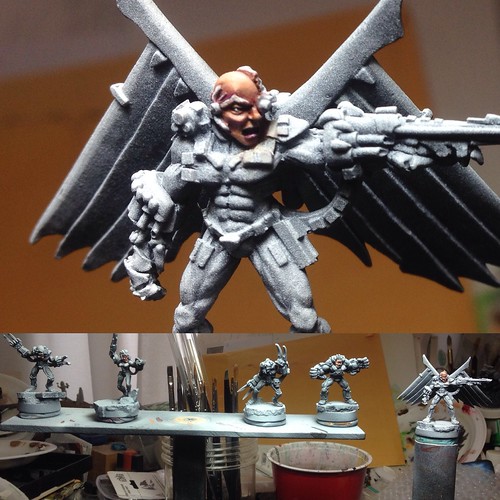 I wanted to keep the paint schemes simple, with only one or two colours noticeable from a distance. Using Citadel washes, I laid in the base colours of the Hunting Rig body armour and weapons, and the hair on the Jakara and Orrus. Details were picked out in various acrylics, followed again by using oils to smooth out transitions and emphasize hot spots or shadows.

I used Vallejo's Non Metallic Metal paint set for the Orrus wrist- and ankle-mounted bolt launchers, on the left below. 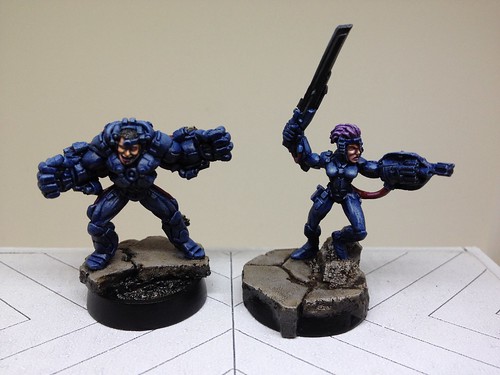 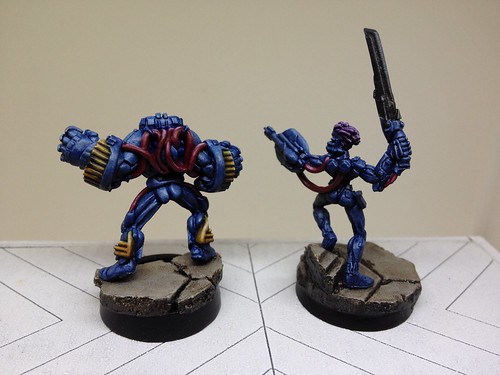 I was inspired to paint the pair of Malcadon similar to the Predators from the Aliens v. Predators franchise. Their Hunting Rigs are markedly different from the other Spyrer types. I mounted one on a tilted base to allow the viewer to see its face. I painted  their wrist mounted weapons as claws rather than blades; it goes with the feel of the living amour they wear. Their helmets' green lenses were painted in Conscript Brian's style. 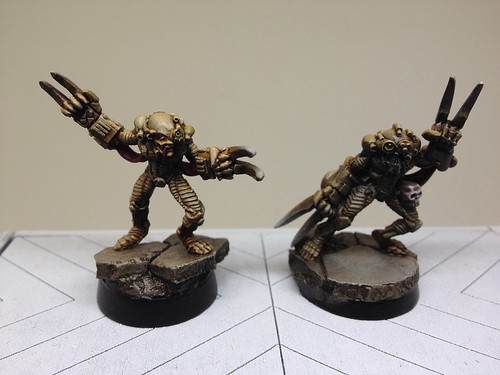 The Malcadon with the closed-face helmet has a couple of trophies hanging from his rig. From the Spyrer rules, I think that I will choose the "Kill X number of opponents" vow for the campaign. 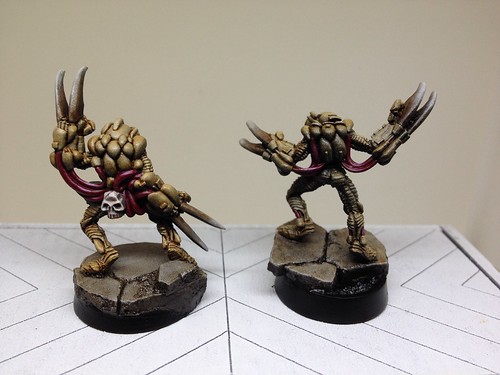 The Yeld is striking. The characterful head has the best sculpting of the five models. Shading the facial implants was a bit tricky. The challenge with the wings was to differentiate them without drawing attention away from the face. The "grey" wings use colours from black, through various greys, to white, The wrist mounted laser tubes also got the Non Metallic Metal treatment. The bases for all figures were glazed with Citadel Devlan Mud. The figures were sealed with Tamiya semi-gloss spray. 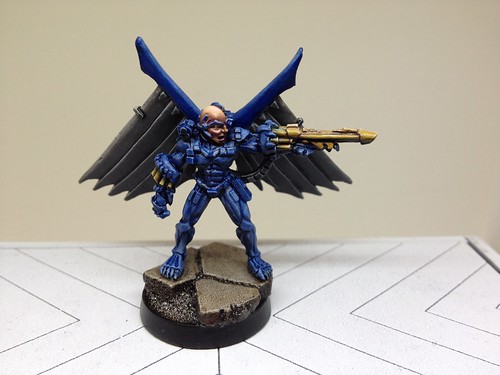 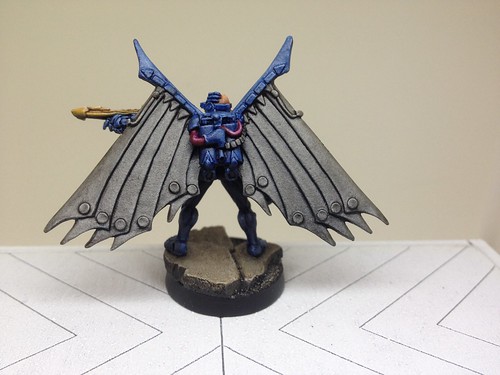 This is the table of terrain that I brought to the LegioCon 2016 miniature war games convention, where I ran some Necromunda participation games. As described elsewhere, the buildings all either take apart or are hollow, to allow play inside them. Thanks to Conscript MikeA, Barry, Jeff, Dave, and Cole for playing! 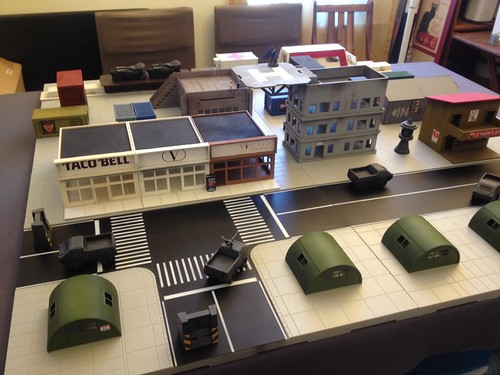 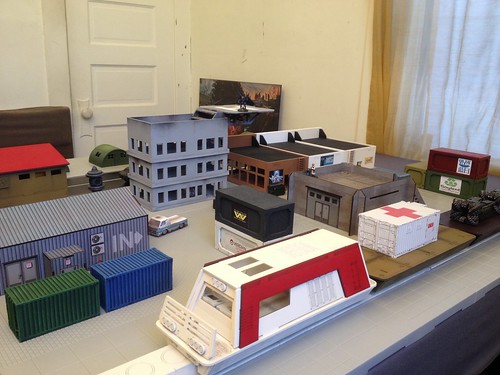 A photo from Friday night at the convention, at the St. James Legion No. 4 (a great, friendly venue!). 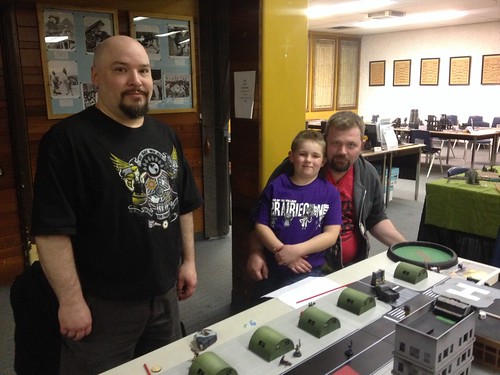 Coinciding with LegioCon was the Manitoba Model Soldier Society annual Show and Competition. I entered my Spyrer hunting party in the Wargames category, and managed to win a gold medal and the Best War Game Unit award. I was rather pleased, since the other MMSS members had several beautiful armies and units on display, including some very nice horse and musket era infantry regiments and cavalry squadrons. 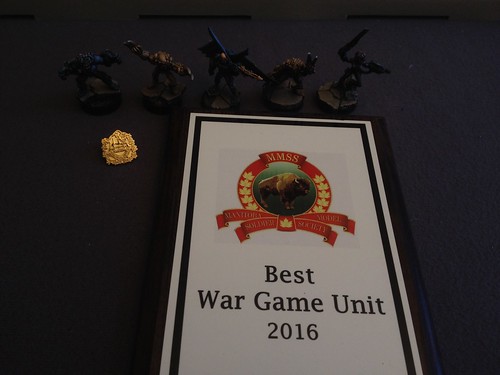 I have found for both modern and sci-fi skirmish games that you need a fairly high density of terrain for your table. Otherwise, automatic weapons or snipers will dominate play. Many of these new pieces came from Conscript Byron's company, SG2 Creations, who make a variety of MDF terrain, available from his web store, or as custom pieces.

New additions to my urban table include the clip-on helicopter landing pad, a Middle Eastern styled garage, an overhead walkway, some planters (with small trees sourced from a model railroad supplier), and some dumpsters. For the most part, the MDF terrain is assembled with white glue, painted quickly with spray can colours from RONA hardware, and weathered with various acrylics and Vallejo powdered pigments.

When mounted on a 3-story building, the landing pad is almost 5 stories above the ground. The Yeld on the landing below is an alternate pose, painted by Conscript Kevin almost 20 years ago. 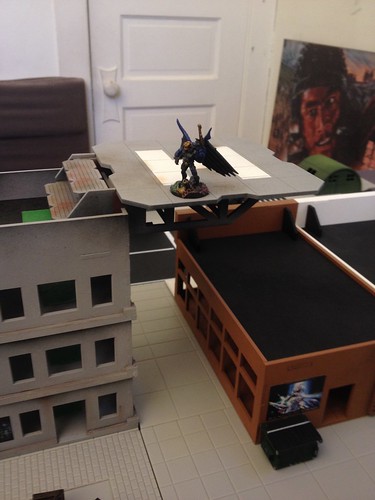 The eight new items in the photo below (except for the trees and dirt) all come from SG2. 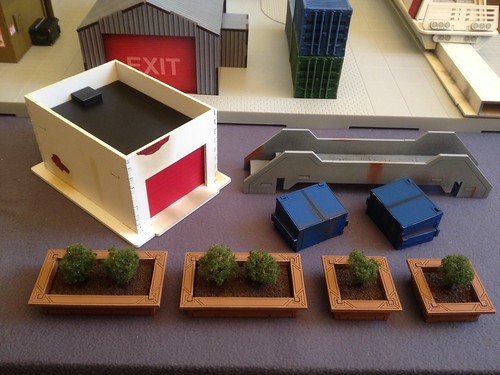 The garage door opens, and the roof comes off to allow you to place models inside. 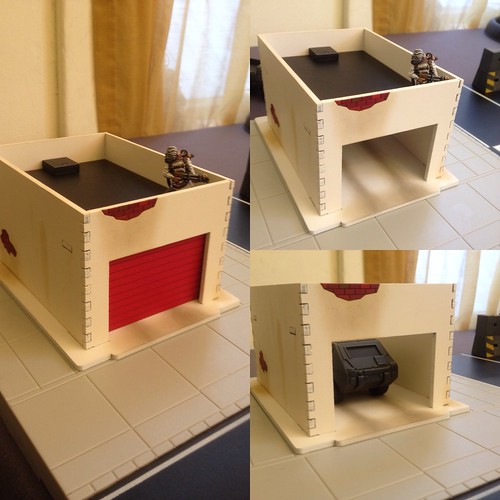 I have another unbuilt walkway; I need to build another 3-story building. 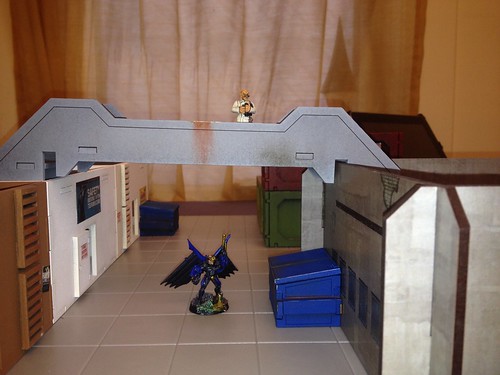 The planters provide a lot of cover. I mounted the trees onto two layers of cut out foam core, then added and painted model railroad dirt. 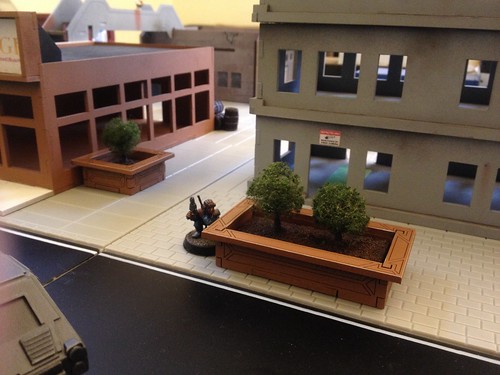 Some of us still have our original Necromunda rule books. The game is basically 2nd ed. Warhammer 40K, with a more skirmish feel. Overwatch, being pinned by gunfire, various levels of wounding effects, and draconian morale rules allow a quick, fun, game with a surprisingly current feel. Although the game is no longer supported by GW (though that may change in future), there are some third party online resources available. For example, the YakTribe Gaming site has PDFs of various rule books and supplements.

I am looking forward to the start of the Necromunda campaign in April!

Also, I am finally getting around to painting a war-band to play samurai skirmish games using rules like Ronin (published by Osprey) and Daishō (from The Ministry of Gentlemanly Warfare).

Next in the painting queue are some Japanese samurai, the Koryu Buntai boxed set from North Star Military Figures, with some Shogunate-era terrain pieces from 4Ground.  The figures are very distinctive. Seven of them are clearly modeled after the titular characters in the movie Seven Samurai (Shichinin no samurai). 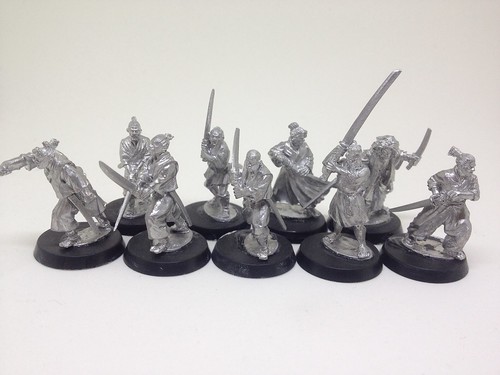 Nine figures, a couple of buildings, some fences, and an ox cart. No problem!
Posted by DaveV at 6:06 PM

Awesome work on the gang, Dave. Really looking forward to playing in the campaign!

What an amazing eBay find to get all the models in new conditions. Cracking paint job to, they look terrific.

those spryer look amazing, the faces are top notch. I'm off to search for that paint set you mention......

Great work Dave - congrats on getting them finished!