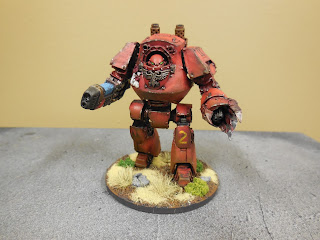 A bit of progress to report on the Heresy escalation... as we posted last week, the campaign has begun. That means the pressure's on to get more stuff out of the painting queue and onto the tabletop for the next big game. 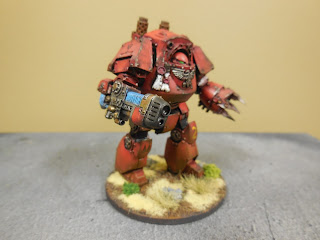 This weekend I was able to finish the Contemptor Dreadnought that had been sitting around for awhile. A pretty basic paintjob to fit in with the rest of the IX Legion "Blood Drinkers" maniple.

The Forge World Contemptor is an excellent looking model and I elected the Plasma Cannon/Close Combat Claw option to arm it, for no better reason than it looks cool... 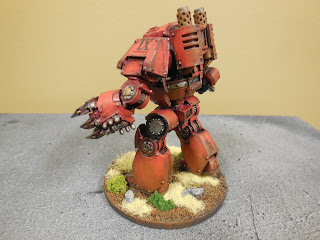 The laser-cut base was kindly provided by Conscript Byron of SG2 Creations, cheers B... 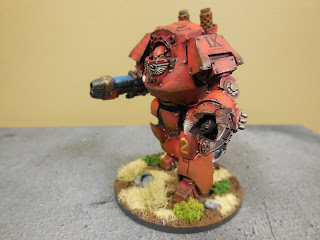 Posing the model was a bit of a challenge, especially as my preferred adhesive is fast-setting superglue. This doesn't leave a lot of time to get the pose right with the multiple parts involved. I think this one came out OK though. 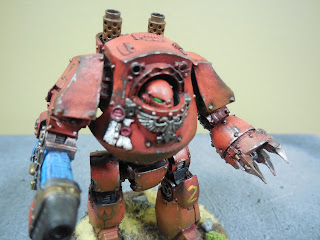 Glowing green eyes.. all the better to see (traitors) with... 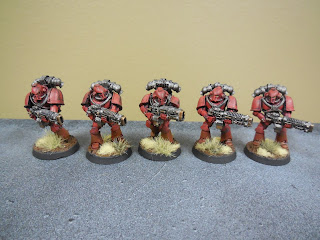 The other escalation update is a bit late, since these guys took part in the campaign game already, but I thought I'd post some pics anyway. 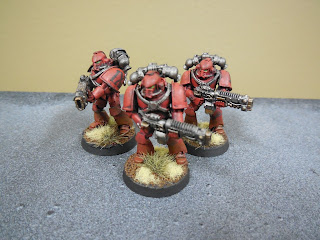 They're MK IV Marines, of course, armed with Volkite weapons. They are a Troops choice in the Legion army list - "Tactical Support Squad". 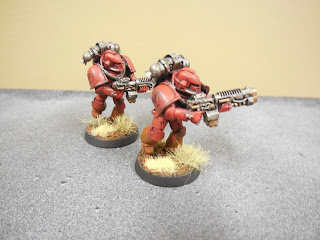 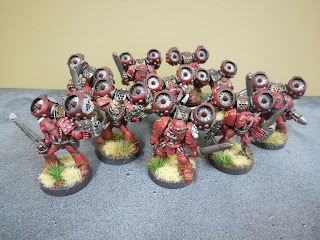 Lastly, here's the converted RT-era Assault Squad. Ten Marines with pistols/bolters and close combat weapons, with a plasma pistol in there too. Jump packs are from Max Mini. 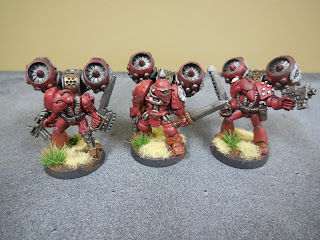 These are three of my favourites - the RT Lieutenant with bionic leg, RT MK III Marine with Bolter and sword, and a converted RT Medic with updated bolt pistol. 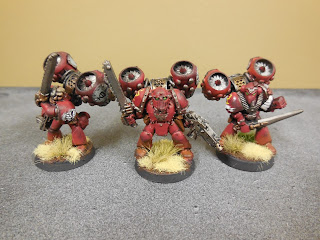 Here's another three - the model at centre has been converted to carry a Heresy-era resin bolter in his right hand. 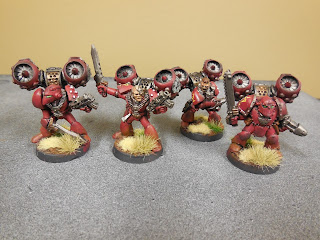 These four chaps fill out the squad. The model second from right has had a head swap, and the one at far right with plasma pistol is the same model as the converted one in the picture above.
It's great to get these models done and into the force org. I'm quickly exhausting the queue of unpainted Heresy stuff... but there's another 10-man RT tactical squad and Apothecary waiting for paint, along with a Chapterhouse Land Raider conversion kit that awaits assembly. That's not even mentioning the Magos and Adeptus Mechanicus guys I need to build and paint to accompany the Reaver Titan... so we'll be busy for awhile yet I think ;-)

Great job Dallas! These fellows will soon see the "light" of Horus on the table, I'm sure...

'Basic paint job' indeed... I like the inclusion of old school Marines very much too.

Interesting how the old school crouched figures look with jump packs... like they were made for it, where as as riflemen they always looked a little strange.

Love the look and feel of these figs.